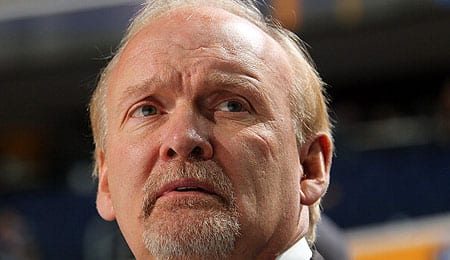 Can Lindy Ruff turn the Dallas Stars around?

Wow. It was Freaky Friday in the NHL coaching ranks. First we had the coaches fired by Vancouver and the Rangers switch teams. And then Lindy Ruff, fired after spending over 14 seasons coaching the Sabres, landed on his feet in Big D.

The decision to hire Ruff didn’t seem to vex Stars General Manager Jim Nill much. Ruff was the first candidate he interviewed and after a second interview, the job was Ruff’s.

In taking over from Glen Gulutzan, fired after Dallas failed to make the playoffs for the fifth straight season, Ruff becomes the 22nd coach in franchise history.

The longest-tenured coach in the NHL, Ruff was canned 17 games into the season after Buffalo struggled to a 6-10-1 record. While the Sabres rebounded to finish .500, they missed the playoffs for a second straight season.
It is Ruff’s experience – plus his energy – that drew Dallas to him to try to end its extended funk.

In the video below, Ruff discusses how excited he is about this new opportunity.

The Stability Ruff had in Buffalo is desperately needed in Dallas, Nill suggested. So the Stars bought in for four years, hoping to tap into some of the magic that allowed Ruff to compile a 571-432-162 record and take the Sabres to the playoffs eight times in parts of 15 seasons.

Ruff’s credibility and knowledge of the game were also selling features for Dallas.

Now it’s your turn. Can Ruff turn around a franchise that’s gotten worse in each of the last two seasons and has been in a tailspin for half a decade? Tell us what you think in the comments below.

By RotoRob
Tags: Vancouver Canucks
This entry was posted on Saturday, June 22nd, 2013 at 7:34 pm and is filed under HOCKEY, RotoRob, Transactional analysis. You can follow any responses to this entry through the RSS 2.0 feed. You can leave a response, or trackback from your own site.