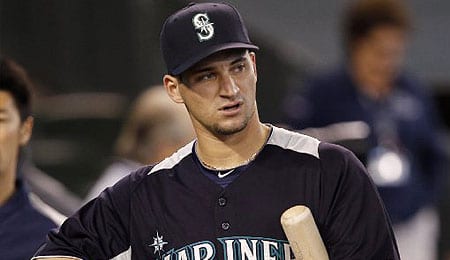 The Mike Zunino era has begun in Seattle.

This week features the MLB debut of another of the game’s most highly touted young pitching prospects as Zack Wheeler takes to the hill Tuesday against the Braves. It’s hard to ignore his huge potential but also hard to recommend buying him as a waiver wire addition when he’s owned in 75 per cent of CBS Leagues. Fantasy owners aren’t pulling punches in their estimation of Wheeler’s upside.

Thursday was the 13th, but you’d have a hard time convincing the Rockies it wasn’t a Friday. The Rox had an evening to forget as a good chunk of their offense was either at the hospital or on their way to the hospital. The final verdict is in and Carlos Gonzalez and his owners have dodged a bullet. Dexter Fowler is day-to-day dealing with a finger issue, but the worst news of the day was that All-World shortstop Troy Tulowitzki will be lost for 4-to-6 weeks with a broken rib. Thursday was a day to forget for Colorado.

Enough of the bad news. Let’s move on to the good and get to this week’s Troll.

Mike Zunino, C, Seattle Mariners (CBS: 35 per cent owned, ESPN: 6 per cent): After months of speculation, Zunino has arrived in Seattle. In 185 at-bats at Triple-A Tacoma he hit 11 bombs with 43 RBI which, on the surface, looks great but with a BB/K ratio of 14/59, we recommend you be cautious with your expectations. Zunino has the potential to be a very good backstop (and he sure looked good in lining his first big league hit — see below), but he could also struggle offensively early on as we’ve seen with so many young catchers as they try to adjust to the demands of handling a big league staff.

Oliver Perez, RP, Seattle Mariners (CBS: 4 per cent owned, ESPN: 4 per cent): Closer Tom Wilhelmsen has been struggling and has officially been given a time-out to get his act together. The M’s have stated that they will be rolling out the bullpen-by-committee plan of attack, with Perez earning the first opportunity and successful save Friday against the A’s. Carter Capps could also find himself in the mix for saves in Seattle, but we’re putting our money (and just a small amount at that) on Perez to get the bulk of the opportunities while Wilhelmsen sorts things out.

Mike Carp, 1B/OF, Boston Red Sox (CBS: 29 per cent owned, ESPN: 37 per cent): Supposedly a part-time player entering the 2013 season, Carp’s strong play is forcing Manager John Farrell’s hand. Carp is now up to eight homers and 25 RBI in 103 at-bats with a phenomenal .320 BA. As long as he’s tearing the cover off the ball, the Red Sox will find a place for him in their lineup.

Logan Forsythe, 2B, San Diego Padres (CBS: 6 per cent owned, ESPN: 4 per cent): Forsythe finally made his season debut last week after overcoming plantar fasciitis. It couldn’t have come at a better time with NL ROY candidate Jedd Gyorko hitting the DL with a strained right groin. Forsythe is a solid short-term option if you’re looking to fill a MI void in your lineup.

Steve Cishek, RP, Miami Marlins (CBS: 36 per cent owned, ESPN: 64 per cent): The bullpen-by-committee situation in Miami seems to be resolved with Cishek back closing full time. He has now earned saves in three of his last four outings without allowing an earned run. Go get Cishek while the going’s good.

Jordan Lyles, SP, Houston Astros (CBS: 21 per cent owned, ESPN: 3 per cent): Over his last six starts Lyles has allowed a paltry seven earned runs and he’ll need that kind of performance to generate wins with the moribund Houston offense behind him. He’s coming off seven scoreless innings and a career-high 10-strikeout performance against the Mariners and should be rostered and active in all formats.

Alex Torres, RP, Tampa Bay Rays (CBS: 2 per cent owned, ESPN: 1 per cent): The southpaw has now pitched 16 IP without allowing an earned run (with just three hits and three walks given up). Toss in the 23 strikeouts and what’s not to like? Even better, Alex Cobb’s injury could send Torres to the rotation which is where he was in the minors.

Michael Pineda, SP, New York Yankees (57 per cent owned, ESPN: 3 per cent): Pineda is looking solid as he continues his rehab assignment and he could return to the Yankees rotation by the end of the month. Buy in early and avoid the rush.

Lyle Overbay, 1B, New York Yankees (CBS: 7 per cent owned, ESPN: 1 per cent): The problem of finding at-bats for Overbay could be resolved as Mark Teixeira has aggravated his right wrist (which sidelined him for the first two months of the season) and has returned to New York for further examination.

Kevin Jepsen, RP, Los Angeles Angels (CBS: 1 per cent owned, ESPN: unowned): Jepsen is slowly moving into a more prominent role in the Halos pen. In 10 appearances since returning from the DL at the end of May he’s been virtually untouchable.

Jose Alvarez, SP, Detroit Tigers (CBS: 3 per cent owned, ESPN: unowned): Anibal Sanchez has been labouring, making it through only 3 2/3 IP against the Twins on Saturday. Should further rest be required for Sanchez, Alvarez could get recalled. Alvarez sure didn’t look out of place in his stellar June 9 debut against the Indians.

Jesus Guzman, 1B/OF, San Diego Padres (CBS: 1 per cent owned, ESPN: unowned): Yonder Alonso is out for at least another 2-to-3 weeks dealing with a broken hand so expect Guzman to get more action for now.

Alfredo Figaro, SP/RP, Milwaukee Brewers (CBS: 7 per cent owned, ESPN: unowned): The Brewers desperately need rotation help and Figaro responded in fine form, pitching seven scoreless against the Fish Wednesday to earn his first victory of the season. He gets the Astros next, as part of a possible two-start week.

Logan Schafer, OF, Milwaukee Brewers (CBS: 1 per cent owned, ESPN: unowned): Schafer enjoyed back-to-back three-hit games last week as he moved into a full-time role while filling in for the injured Ryan Braun.

By Tim McLeod
Tags: Atlanta Braves, Colorado Rockies, Zack Wheeler
This entry was posted on Sunday, June 16th, 2013 at 12:59 pm and is filed under BASEBALL, The Wire Troll, Tim McLeod. You can follow any responses to this entry through the RSS 2.0 feed. You can leave a response, or trackback from your own site.