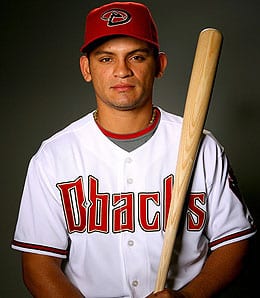 Believe it or not, Gerardo Parra is more menacing than he looks.

Welcome back to another season of the MLB version of The Wire Troll. As always, the first couple weeks of a new season is chock full of opportunities. Some of the best buys we can find will come from the early part of each season as we saw just last year when Mike Trout, Bryce Harper and myriad starters emerge and produce meaningful statistics for our Fantasy squads. Don’t snooze in the early going as it will come back to haunt you.

Gerardo Parra, OF, Arizona Diamondbacks (CBS: 38 per cent owned, ESPN: 34 per cent): Adam Eaton’s injury has created playing time opportunities and so far Parra has taken advantage of that situation. He is the Arizona lead-off bat until Eaton returns and he’s batting 11-for-24 with a homer and stolen base. Enjoy the ride until the walking wounded heal.

Chris Heisey, OF, Cincinnati Reds (CBS: 9 per cent owned, ESPN: 1 per cent): Ryan Ludwick is going to miss at least three months after undergoing surgery to repair a torn labrum last week. Billy Hamilton — as evidenced from his Spring Training results — isn’t quite ready, so the ball is in Heisey’s court… for now. In 2011, Heisey crept on to our Fantasy radar by smacking 18 long balls in 279 at-bats, but he regressed noticeably in 2012. He’s keeping the slot warm for Hamilton, but in the interim has the potential to provide solid power numbers.

J.A. Happ, SP, Toronto Blue Jays (CBS: 17 per cent owned, ESPN: 1 per cent): Happ parlayed a solid spring (helped along by the trials and tribulations of Ricky Romero) into a two-year deal and opened the 2013 campaign by shutting down the Red Sox over 5 1/3 innings Saturday. Happ allowed one hit, three free passes, and chipped in with six strikeouts in earning the victory.

Justin Maxwell, OF, Houston Astros (CBS: 21 per cent owned, ESPN: 21 per cent): Maxwell is going to strike out a ton, but that just makes him the ideal Astro this season, doesn’t it? He’s got the gig and the power-speed combination warrants a slot in leagues using five outfielder sets. Someone on the offensive side of things in Houston (other than Jose Altuve) has to be Fantasy relevant this season and Maxwell looks like that guy.

Jose Fernandez, SP, Miami Marlins (CBS: 66 per cent owned, ESPN: 8 per cent): There is no doubt that Fernandez is an amazing prospect, but the kid is barely out of diapers. We’re talking about a starter that hasn’t pitched above A-ball. In CBS leagues, Fernandez’s ownership jumped by 33 percentage points in the past week. Temper your expectations, but if you can sneak in a moderate bid he’s worthy of a bench stash. At the very least, the Marlins have found someone worthy of a second bobblehead night (assuming they can afford to honour anyone other than Giancarlo Stanton).

Travis Wood, SP, Chicago Cubs (CBS: 19 per cent owned, ESPN: 1 per cent): Wood tossed six innings of one-hit ball against the Pirates in his season debut and has the injury-wracked Brewers next on the schedule. Is 2013 the year we finally see sustained success from him?

Jeremy Hefner, SP, New York Mets (CBS: 3 per cent owned, ESPN: 1 per cent): Yes, it was only the Marlins, but nonetheless Hefner enjoyed a solid start to his season. The injuries to both Johan Santana and Shaun Marcum have opened the door and with his minuscule walk rates, Hefner is an intriguing option in deeper formats.

Zach McAllister, SP, Cleveland Indians (CBS: 9 per cent owned, ESPN: unowned): One of my favourite pre-season sleepers got off to a solid start, albeit in a losing effort. McAllister pitched six solid innings Friday against the Rays allowing two earned runs, with no walks and three strikeouts. That kind of solid control for an improving Cleveland squad is worthy of an early season investment.

Mark Ellis, 2B, Los Angeles Dodgers (CBS: 9 per cent owned, ESPN: 3 per cent): Hitting in the two-hole in Los Angeles should provide Ellis with the chance to produce better than average runs scored. Toss in a sprinkling of homers and a stolen base or two and he’s a sneaky value pick in deeper leagues. Let’s face it — the middle-infield isn’t overflowing with talent.

Franklin Gutierrez, OF, Seattle Mariners (CBS: 18 per cent owned, ESPN: 3 per cent): Are the injuries Gutierrez dealt with the last two seasons now in the rear view mirror? Recall that his first season in Seattle back in 2009 was a rather impressive effort and with two homers, six RBI, and four runs scored last week he’s off to a great start.

Eduardo Nunez, SS, New York Yankees (CBS: 17 per cent owned, ESPN: 3 per cent): Derek Jeter is still a month away from returning. Nunez is a temporary fix but one that should help pad those stolen base numbers. Note that he got plunked Friday and hasn’t played since, but it’s considered a minor ailment. Just double check that Nunez is ready to rock Monday before inserting him into your lineup.

Drew Smyly, SP/RP, Detroit Tigers (CBS: 20 per cent owned, ESPN: 1 per cent): After a rough debut against the Twins, Smyly pitched four perfect innings against the Yankees Friday in mopping up for a somewhat shaky Doug Fister, earning his first career save in the process. Could Smyly get another crack at the rotation? That depends how much patience the Tigers exercise with Rick Porcello. Keep an eye on the situation.

Jim Henderson, RP, Milwaukee Brewers (CBS: 16 per cent owned, ESPN: 2 per cent): Closer John Axford has endured two bad outings and is now on a very short leash. A rather large drop in velocity in his last outing has to be cause for concern. Henderson is next in line to close for the Brew Crew and should generate plenty of interest this week for those chasing saves.

Kelvin Herrera, RP, Kansas City Royals (CBS: 8 per cent owned, ESPN: unowned): If you happened to miss out on Saturday’s action, KC closer Greg Holland had a rather rough night. He walked the bases loaded and then nearly escaped by striking out the next two batters before a bases clearing double by Kevin Frandsen did him in. In Holland, we are talking about a closer with a career total of 20 saves and some control issues (34 walks in 67 innings last year). If Holland continues to struggle with his control, Herrera — who has absolutely filthy stuff — could get a shot, making him worth a preemptive strike.

Joaquin Benoit, RP, Detroit Tigers (25 per cent owned, ESPN: 6 per cent): It’s very crowded in the Tiger bullpen but after Phil Coke’s blown save Wednesday against the Twins, it appears that Benoit is currently in the driver’s seat. He also has the endorsement of Manager Jim Leyland. That’s good enough for me.

Kyuji Fujikawa, RP, Chicago Cubs (CBS: 46 per cent owned, ESPN: 43 per cent): Carlos Marmol imploded again on Saturday. That makes three-for-three awful outings so far this year and Manager Dale Svuem has seen enough, anointing Fujikawa as his new closer. Fujikawa didn’t fare much better Saturday, but is still the favourite for the bulk of the saves moving forward.

By Tim McLeod
This entry was posted on Sunday, April 7th, 2013 at 12:40 pm and is filed under BASEBALL, The Wire Troll, Tim McLeod. You can follow any responses to this entry through the RSS 2.0 feed. Both comments and pings are currently closed.