A Hell of a Pitching Matchup 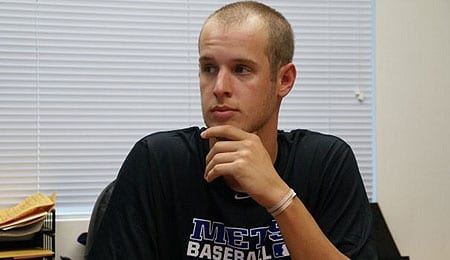 Zack Wheeler could give the Mets a superb one-two punch at the top of the their rotation.

If you love a good pitcher’s duel (Jordan Lyles vs. Jeremy Bonderman, anyone?), you better be tuning in Thursday afternoon for the rubber match of the series between the St. Louis Cardinals and the New York Mets.

Of course, rain may threaten all the fun, but if you ask Wainwright, he might tell you that missing the Mets wouldn’t be the worst thing that could happen to him. After all, he’s inexplicably struggled in his career against them (1-4, 7.29 ERA in seven games, five of them starts). WTF?

Harvey still hasn’t lost this year, but he’s not exactly winning anymore either with just one victory and eight no decisions over his last nine starts after that crazy good start to the season.

He looked very sharp in his last start (see video below), but it was the Marlins he was facing, and worse yet, Harvey had to come out early with back stiffness. Hey, carrying a rotation ain’t easy, folks.

Still, despite the Mets struggles this year, it’s an exciting time for their fans as they begin to put the pieces together to recover and be competitive again.

While Harvey’s emergence has been the most obvious development this year, the impending arrival of pitching prospect Zack Wheeler (No. 7 on our Top 60 Prospects list) will amp up the feeling that the future looks bright.

Wheeler will make his MLB debut Tuesday, but the team has yet to determine who will lose their job as a result. Dillon Gee seemed the likeliest candidate, but he’s won three straight starts and looked really sharp Wednesday, so he’s giving the team pause to reconsider.

If it’s not Gee, then Jeremy Hefner might get the boot. Or perhaps the Mets will go with a six-man rotation for a while, especially with a doubleheader looming plus the makeup game against the Rockies on the horizon.

Crave more in-depth Fantasy analysis? Then join us every Thursday at 9 p.m. EST for RotoRob’s Fantasy Baseball Weekly Podcast on Blogtalkradio. Tim McLeod and RotoRob will entertain and edify you for a half hour or more each week. This week, we examine the latest chapter in the ongoing Red Sox-Rays beanbrawl war. Tune in here.

By RotoRob
This entry was posted on Thursday, June 13th, 2013 at 9:59 am and is filed under BASEBALL, Game Preview, RotoRob. You can follow any responses to this entry through the RSS 2.0 feed. Both comments and pings are currently closed.