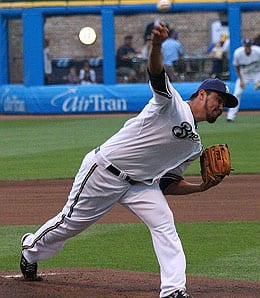 Yovani Gallardo is closing in on a second straight 200-strikeout season.

Thanks to your advice last week, going with my two starters was worth losing a few points in hitting. I moved into a tie for third where $1,300 awaits.

If I don’t give you more than one set of adjacent stats, then I am locked into that category.

The rules are we must use seven to ten pitchers and 12-to-15 hitters with no more than 22 actives total per week (that starts Monday).

These are the key free agents with their schedules for the week:

So, how many hitters should I start? Who will get the at-bats? Overall, there is not as much to lose or gain in hitting as pitching it seems.

Would you recommend any free agents over the rostered guys I now have? Do my starters appear “safe” from a beating? Will they get the projected two starts?

I have lots of supposedly two-start pitchers, but cannot afford a blow-up Ryan Dempster-style considering the very tight standings in WHIP and ERA.

Should I go with one, two, three or even four closers?

This is it — last decision of the year…whew and thanks for your valuable time.

I think your answer is a very simple one. You have to go with a pitching-dominant plan heading into this week. You need both wins and saves to protect your current situation and at the same time at least decent strikeout numbers to hold off your competition. My suggestion is to use the flex in your roster allocation to go heavy on the pitching. You have the closers available to make that sort of move and the points are there for the taking. On offense, you have very little to both gain or lose at this stage, so focus on your pitching. You need those save points badly and at the same time it is essential that you maintain some K numbers and potential wins.

Good fortunes heading into Week 26 for your Fantasy squad.

By Tim McLeod
This entry was posted on Monday, September 27th, 2010 at 3:47 pm and is filed under BASEBALL, Dear RotoRob, Tim McLeod. You can follow any responses to this entry through the RSS 2.0 feed. You can leave a response, or trackback from your own site.