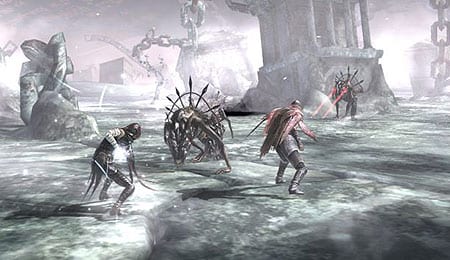 For most of 2013 my PlayStation Vita has played the role of paper weight and occasional bathroom companion. In fact, outside of a little cross-play action with Guacamelee, I don’t think I’ve played my Vita with any regularity since MLB ’13: The Show. And then, just when I thought I was out, Sony’s Soul Sacrifice pulled me back in with its combat-heavy, level-grinding goodness.

An action-RPG, Soul Sacrifice puts a half-dozen spells at your disposal for each fight. These “offerings” can be changed before any battle, and the game allows you to save a ton of various loadouts… enough to prepare for any foe. Three of the four face buttons trigger these spells while the right bumper allows you to toggle between the two sets. The “X” button takes care of pretty much everything else as you hold it down while moving to sprint, double tap it for an evasive role or hold it down while you’re still, to interact with an object.

Although it works fairly well, there will be times when you’ll toggle between spell sets without knowing it because once you defeat an enemy you’re left with two choices: save it (left bumper) or sacrifice it (right bumper). With the right bumper pulling double duty you can accidentally switch while sacrificing a fallen adversary, and as a result you may, for example, heal yourself instead of firing a projectile. This is mostly an inconvenience except in the cases when your offering is nearly exhausted — then you can actually break a spell and lose use of it for the duration of the fight.

Tapping down on the d-pad activates “Mind’s Eye,” which alters your vision so that you can see the outlines of enemies, their health status (green is good, red is almost dead) and any weak points the monsters might have. My only quibble with this function is that you can’t attack when it’s active, making it more difficult to target weaknesses.

Visually, Soul Sacrifice can be neatly compartmentalized into categories: characters and environments. The former is impressive with lots of detail work on everything from common and boss enemies to your own customizable sorcerer. In addition to being able to switch outfits and colours, your deformed right arm will change if you skew toward defensive or offensive gameplay. Larger monsters are also well designed with gruesome traits that give them a hideously twisted feel. With the latter, however, you’ll find yourself exploring the same areas over and over again — that repetitiveness is a common theme here and it stands as the game’s biggest weakness.

There’s a decent soundtrack here, though the haunting melodies that play when you’re in the hub world began to grate on me during longer sessions. The localized voice work didn’t click with me, either, in part due to the uninteresting snippets of dialogue between the characters as well as the uninspired delivery.

When first we meet our nameless, faceless protagonist things are looking decidedly bleak — both for them and the world in general. An evil sorcerer named Magusar has brought about an apocalypse, and those that are still alive are caged to await their turn to be harvested by the wizard. Your only hope for survival lies in the pages of a magical book, wherein you’ll find the tale of an unnamed sorcerer that can be vicariously experienced by you. Only by reliving these pages from the past can you harness the power needed to battle Magusar in the present.

The book, known as Librom, doubles as Soul Sacrifice’s hub world. From here you can advance the main story, tackle one of the many side quests, recruit sorcerers, customize your appearance, fuse spells, jump online and more. There is a load of content to be found here with dozens of hours of core gameplay to go along with all the level- and spell-grinding you could care to undertake.

Of course, all that content doesn’t mean much if the action isn’t enjoyable. On that front, battles in Soul Sacrifice are generally fast paced, which fits the bite-sized nature of the Vita, and occasionally strategic (at least when squaring off with larger foes). However, they’re very similar from one to the next and tend to get repetitive. I personally found that if I went much beyond the 30-minute mark the fun factor faded considerably.

What does differ is the game’s battle grading system. Here you’ll be awarded points based on how effectively you took out the enemy. The highest bonuses come from not taking damage and finishing the quest quickly, while others are available for countering your opponent or exploiting their weak points — it’s not necessary to do against lesser foes, but bosses are much easier if you can successfully target cursed points and utilize their elemental weakness. Perform well and you’re presented with more offerings. Do poorly and you’ll get little reward for your trouble.

During these battles you’ll defeat the monstrous form of run-of-the-mill creatures, as well as other human sorcerers that have lost their way. Once that happens you’ll be presented with the option to either sacrifice or save their souls. Sacrificing builds up your attack power while saving boosts your health/defense (and you’ll get a little in-game boost as well). You can evolve up to 100 levels combined, so it’s up to you how you want to split them: 50-50, 60-40, or even 99-1.

The leveling system is an example of the overriding theme of Soul Sacrifice, which is that everything has a cost… or at least a perceived cost. Overuse an offering and it will break (but it can be repaired). Have a companion fall in battle and you can choose to sacrifice them for a powerful attack (but they can be brought back to life). Power up your defense at the expense of your spells’ potency (but you can de-level at any time and progress differently). Unleash the devastating “Black Rites,” spells that do huge damage in exchange for disfigurement and ailments, only to heal yourself the second you get back to the menu.

All these things can be done with “lacrima,” which is a fluid secreted from Librom. Were it scarce it’d at least make you think more carefully about some of these actions, but you can collect it so frequently that I never even came close to running out. Making gamers pay a price for their decisions was a cool hook; too bad Sony didn’t give it some real teeth.

One other area that should be brought up in terms of combat is teammate A.I. It is, in a word, atrocious. Any sorcerer that lacks a healing spell borders on useless as they’ll be defeated early in any significant fight, and if you want their firepower you’ll need to sacrifice some of your own health to revive them.

As annoying as that is, however, it pales in comparison to friendly fire. In a bizarre design decision, your fellow sorcerers cannot damage you, but they can knock you to the ground with area-of-effect attacks… and they will do it over and over (and over, and over) again. It’s so frustrating that it effectively turned me into a ranged attacker when I had teammates.

While I wouldn’t characterize Soul Sacrifice as the best game on the PlayStation Vita, I would say that it is the most addicting. It’s a great game to pick up in short bursts, and the story is easy enough to follow that you can go a few days without playing and jump right back in. A few tweaks, including the option to turn friendly fire off, would’ve helped, but there are still many hours of entertainment to be found here.

By Herija Green
This entry was posted on Wednesday, May 22nd, 2013 at 12:02 pm and is filed under Herija Green, Video Game Reviews. You can follow any responses to this entry through the RSS 2.0 feed. Both comments and pings are currently closed.