The Wire Troll: The Venerable Will Venable 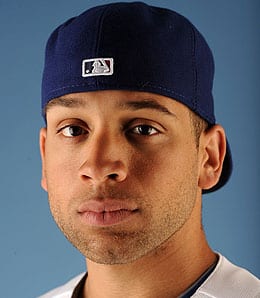 James Loney has silenced the doubters.

It’s that very special day when we take the time to honour the special ladies in our lives. Shouldn’t it be Mother’s Day every day? Take the time to acknowledge everything that they do in making our lives as happy and fulfilled as they truly are.

After enjoying a couple weeks off, it’s time to get back down to business. This week we’re going to focus on some of the slow starters and veterans that are starting to round into form along with our usual look at the constant state of flux in the world of closers. Without further ado, let’s troll the wire.

James Loney, 1B, Tampa Bay Rays (CBS: 24 per cent owned, ESPN: 23 per cent): Many questioned the Rays’ acquisition of Loney, but so far it’s been golden. He’s mashing to the tune of a .371 BA with two homers and 19 RBI, and has even tossed in a couple stolen bases for good measure. Is it sustainable? No… but you’ve got to ride the hot hand and Loney is currently all of that and then some.

Dayan Viciedo, OF, Chicago White Sox (CBS: 41 per cent owned, ESPN: 20 per cent): We’re a bit surprised by the low ownership levels on Viciedo. This is a full-time left fielder coming off a 25-homer, 78-RBI season who is only 24 with a bright future, especially from a power perspective. Viciedo is under-owned regardless of the slow start and lost time due to injury.

Mitch Moreland, 1B, Texas Rangers (CBS: 33 per cent owned, ESPN: 20 per cent): Another slow starter, Moreland put it into high gear last week and is now up to six long balls with a .293 BA. He’s been a key component of a Rangers squad that has jumped out to a five-game lead in the AL West.

Zach McAllister, SP, Cleveland Indians (CBS: 38 per cent owned, ESPN: 7 per cent): McAllister’s ownership levels continue to grow but he’s still not getting the love he deserves. He’s now up to three wins and has allowed 32 hits and 10 walks while striking out 28 in 37 2/3 IP. A starter sporting a great 2.63 ERA should be owned and starting in more than seven per cent of ESPN leagues.

Hector Santiago, SP, Chicago White Sox (CBS: 45 per cent owned, ESPN: 4 per cent): Santiago is coming off a very strong start against the Mets which saw his ownership levels jump from 12 to 45 per cent in CBS leagues last week. Just be aware that either Santiago or Dylan Axelrod will be moving to the bullpen when John Danks returns. However, Santiago’s high strikeout rates make him a solid option in either capacity.

Oswaldo Arcia, OF, Minnesota Twins (CBS: 23 per cent owned, ESPN: 7 per cent): Oswaldo has spanked three homers with 12 RBI in 73 at-bats. It’s time for mixed leaguers to give the young slugger a serious look.

Will Venable, OF, San Diego Padres (CBS: 9 per cent owned, ESPN: 1 per cent): It’s been a feast or famine year so far for Venable. It’s feast time again as he’s gone 7-for-18 with three homers, five RBI, six runs scored and three stolen bases in the last week. Grab him now while he’s in feast mode.

Jon Jay, OF, St. Louis Cardinals (CBS: 43 per cent owned, ESPN: 23 per cent): After a very slow start, Jay has turned things around and is now up to .264 with three homers, 17 RBI, and 21 runs scored. If an owner gave up on him after that horrid start you might want to give him a second look.

Ryan Doumit, C/OF, Minnesota Twins (CBS: 52 per cent owned, ESPN: 13 per cent): Finally, Doumit appears to be on track. Three homers and seven RBI in the past five games should have your attention.

Francisco Liriano, SP, Pittsburgh Pirates (CBS: 41 per cent owned, ESPN: 3 per cent): If one in a row is considered a streak, Liriano’s on one. The strikeout potential is tempting.

Brandon Beachy, SP, Atlanta Braves (CBS: 47 per cent owned, ESPN: 4 per cent): With news that Beachy is heading out on a rehab assignment this week, it’s time to make a move.

Adam Lind, 1B, Toronto Blue Jays (CBS: 15 per cent, ESPN: 1 per cent): In case you missed RotoRob’s flogging of Lind last month, the two homers in the past three games serves as a good reminder. The Jays need all the help they can get right about now.

Junichi Tazawa, RP, Boston Red Sox (CBS: 39 per cent owned, ESPN: 61 per cent): Since being named interim closer in Boston, Tazawa has struggled, allowing runs in both his appearances. Koji Uehara is currently next in line and if Tazawa continues to struggle, Uehara could see opportunities until the return of Andrew Bailey. Still, Tazawa has the best arm in that pen beyond a shadow of a doubt. The question is will we see that form while he’s filling in for the injured Bailey. We’re betting we do.

Heath Bell, RP, Arizona Diamondbacks (CBS: 39 per cent owned, ESPN: 63 per cent): J.J. Putz is dealing with myriad elbow issues and has hit the DL for what could be an extended stay. Bell has been given the first shot at the gig and reeled off three consecutive saves last week. The leash will be short with both David Hernandez and Matt Reynolds lurking in the shadows, but right now Bell is the go-to guy, so go get him.

Jared Burton, RP, MinnesotaTwins (CBS: 5 per cent owned, ESPN: 1 per cent): Incumbent Glen Perkins was unavailable Saturday with soreness in his left side and Burton retired the side in order to earn his first save of the year. Burton is the clear cut No. 2 arm in the Twins’ pen and even if he’s not closing he provides great value in all formats.

Crave more in-depth Fantasy analysis? Then join us every Thursday at 9 p.m. EST for RotoRob’s Fantasy Baseball Weekly Podcast on Blogtalkradio. Tim McLeod and RotoRob will entertain and edify you for a half hour or more each week. This week, we hope to have RotoRob back in action, but time will tell based on how the NHL playoffs shake down. Tune in here.

By Tim McLeod
This entry was posted on Sunday, May 12th, 2013 at 3:34 pm and is filed under BASEBALL, The Wire Troll, Tim McLeod. You can follow any responses to this entry through the RSS 2.0 feed. Both comments and pings are currently closed.