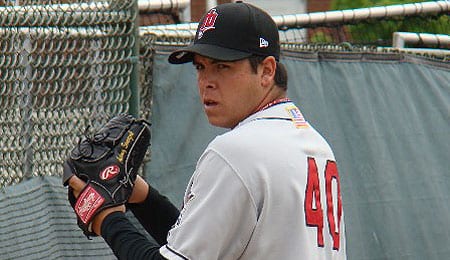 Anthony Swarzak seems to have found himself in his new role.

Every now and then, Minnesota Twins righty Anthony Swarzak teases us with his talent.

Hell, a couple of years ago, we even thought he might offer some Fantasy value, but not much came of it, and despite the modest development he exhibited in 2011, he was smacked around pretty good last year.

Well, Swarzak finally seems to have found a role that suits him. Pitching in long relief, he’s shown improvements across the board and while his role is unlikely to yield Fantasy value, Swarzak’s improvements have helped the Twins hold their own in the AL Central so far this season.

However, things didn’t start swimmingly for Swarzak this season. He had to begin the season on the DL with rib fractures — suffered in January when he wrestled with teammates at a fan festival. No, we’re not making this up. And no, we don’t know if there were pillows involved.

Swarzak didn’t miss much time, making his season debut on April 7, and while he’s had a couple of rough outings (most recently Friday, when he was shelled in his one inning, suffering his first loss of the year), more often than not, he’s looked extremely sharp, like he did in a mop-up role Sunday.

Assuming Swarzak avoids injury, he’ll likely set a new career high in games pitched this season, but what’s really caught our eye so far is the reduced run numbers (leading to an ERA that is currently over a run better than his career best) and his tremendous command (5.67 K/BB ratio).

Swarzak, 27, is out of options, so should he falter at any point, it could be the end of the line for him in Minnesota, assuming someone else wants him. He’s never racked up many strikeouts, but now that he’s pitching exclusively out of the bullpen for the first time in his MLB career, Swarzak’s K/9 has risen to a career best 6.85. Hardly overpowering, but a significant improvement nonetheless. Previously plagued by long balls (15 in just 96 2/3 IP last year), he has yet to yield a dinger through 10 appearances and 22 1/3 IP so far in 2013. That’s another big key in the early going.

Swarzak has really given Manager Ron Gardenhire’s staff a shot in the arm with his ability to eat up multiple innings and save the bullpen (for instance, a week ago he tossed three shutout frames in an extra-inning loss to Boston).

This dude is notorious for his struggles with consistency — hence the maddening nature of owning him when he’ll occasionally tease owners with his Fantasy value and then toss an absolutely stinker the next time out.

Swarzak has always had good control, but it’s been phenomenal so far this season; his undoing has been an inability to throw the ball by hitters, but as mentioned he’s shown improvements in that regard this season.

Who knows? If Swarzak keeps this up, maybe he’ll get pied in the face again.

Crave more in-depth Fantasy analysis? Then join us every Thursday at 9 p.m. EST for RotoRob’s Fantasy Baseball Weekly Podcast on Blogtalkradio. Tim McLeod and RotoRob will entertain and edify you for a half hour or more each week. This week, we hope to have RotoRob back in action, but time will tell based on how the NHL playoffs shake down. Tune in here.

By RotoRob
This entry was posted on Monday, May 13th, 2013 at 2:00 pm and is filed under BASEBALL, Player profile, RotoRob. You can follow any responses to this entry through the RSS 2.0 feed. Both comments and pings are currently closed.