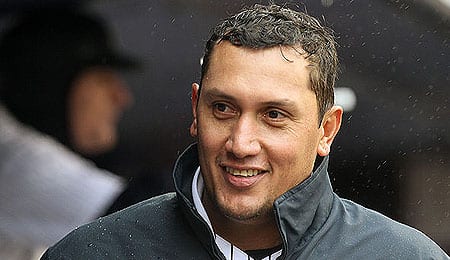 Freddy Garcia looked brilliant in his debut for the Baltimore Orioles.

Tim McLeod is still out of action, currently on a scouting mission in Milwaukee, seeking the best sausages the world has to offer, so once again The Wire Troll falls into the hands of your editor.

Hanley Ramirez has landed back on the DL; Miguel Cabrera keeps mashing; and Stephen Strasburg pitched well after his injury scare, but had some long ball issues.

Freddy Garcia, SP, Baltimore Orioles: The last time we talked about Garcia in a Podcast in late-December, he had become so irrelevant that Tim got confused about who we were even talking about. However, with the Orioles struggling to find a fifth starter, Garcia found himself back in the bigs Saturday, and to say he was successful is a bit of an understatement. Forced to start the season in the minors, he did not pout like a cranky old veteran; instead, he took on a leadership role and proved he was a great teammate. So then he comes back to the Show and takes a no-hitter into the seventh inning, settling for a no-decision after giving up a two-run shot to Mark Trumbo. Don’t look for many Ks from Garcia, but he is obviously still very capable of getting MLB hitters out, so if you need rotation help, give the soon-to-be 37-year-old righty a look as a streaming option.

Yonder Alonso, 1B, San Diego Padres: A graduate from our 2012 Top 55 Prospects list, Alonso mashed a go-ahead two-run jack Friday to help the lead the suddenly resurgent Padres to victory. Heading into action Saturday, he’s really been catching fire, going 7-for-21 with a couple of dingers and seven ribbies over a five-game stretch. Alonso is playing every day, and other than a slightly increased strikeout rate, all signs are pointing up for him as Fantasy owners are finally starting to catch on that he might actually be worth owning. No one will ever confuse him with a slugging first baseman, but he’s improving and has yet to reach his power prime.

Ubaldo Jimenez, SP, Cleveland Indians: It took five starts, but Jimenez finally busted his win cherry for 2013 and he did so in very impressive fashion, tossing seven shutout frames of three-hit ball against a hot Royals’ squad. Let’s not get carried away here, but the fact is that there is plenty of motivation for Jimenez to channel his 2010 form: he’s a pending free agent, so is in a season-long audition for a multi-year contract; and — more urgently — his is pitching for his job with every start now as the Indians are really running out of patience with the enigmatic hurler. Call it a hunch, but we have the feeling Jimenez is about to find some much-needed consistency and string a couple of solid outings together. We recommend taking a flier (although you may want to keep him on your bench with his next two starts coming against Oakland and Detroit).

Julio Teheran, SP, Atlanta Braves: No. 21 on our Top 60 Prospects list this year, Teheran has failed to build on his brilliant spring performance. However, he’s managed to lower his ERA in every start this season as he slowly rounds into form. Yes, Teheran really needs to figure out how to limit baserunners if he’s going to stick around in his starts long enough to start earning more Ws, but we’re seeing progress. After some early-season long ball issues, he’s now gone back-to-back starts without serving up a gopher ball. This kid has some serious talent and once he gets more consistent movement on his fastball, we think he’s really going to take off behind that sweet Atlanta lineup. Now’s the time to jump on Teheran’s train.

Corey Kluber, SP, Cleveland Indians: We gave Kluber a nod in early August and it was a somewhat decent call as he was hit hard that month, but showed improvement in winning a couple of games in September. This season he’s pitching extremely well, helping the Indians to a nice winning streak of late with victories in each of his last two outings, one of which was a four shutout inning relief appearance and the second of which was his first start of the season — seven solid innings of seven-hit, two-run ball with six Ks and no walks. Kluber still hasn’t walked a batter this season as his command is really rounding into form. He does not overpower hitters, but uses his fastball-slider-changeup mix to rack up plenty of strikeouts. Kluber takes on a weak Twins’ attack Sunday, so could be a nice pick and play option.

Dee Gordon, SS, Los Angeles Dodgers: Gordon is getting another shot with Hanley Ramirez back on the DL.

Jhoulys Chacin, SP, Colorado Rockies: Chacin was really rolling before going on DL and he’ll be back Sunday, so grab him while you can.

Eric Young Jr., OF, Colorado Rockies: Young is getting another chance to show what he can do with Dexter Fowler hurting and he came through Saturday with three hits and two runs out of the leadoff spot. Young is a nice short-term NL-only option.

Jason Bay, OF, Seattle Mariners: Bay has two homers in his last five games and has hit safely in seven straight. Having escaped New York, is he back to being Fantasy relevant?

By RotoRob
Tags: Hanley Ramirez
This entry was posted on Sunday, May 5th, 2013 at 11:24 am and is filed under BASEBALL, RotoRob, The Wire Troll. You can follow any responses to this entry through the RSS 2.0 feed. Both comments and pings are currently closed.