NHL Today: Toni Lydman Doubtful for Rest of First Round 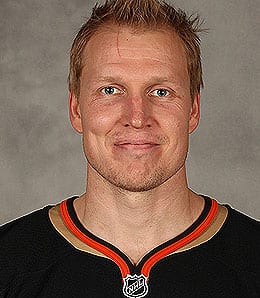 Will Anaheim Ducks defenseman Toni Lydman miss more time than Justin Abdelkader will for hurting him?

Abdelkaber received a two-game suspension for his high hit on Lydman in Game Three and the Duck blueliner will definitely not play in Game Four Monday as a result of his head injury.

Further, Lydman’s status for the rest of the series is in doubt.

Did Abdelkaber’s hit warrant the suspension?

You be the judge.

With Lydman out, Sheldon Souray will suit up. Souray was a healthy scratch in Game Three after a pair of awful penalties in Game Two — including one that led to Detroit’s overtime winner. His offensive upside, however, is unquestioned.

Abdelkaber sounded remorseful for the hit and said he’s learned his lesson: “You’ve got to really get low on the hits. You can’t get anywhere near the head.”

With Abdelkader out, Todd Bertuzzi gets another shot, although he played so sparingly in Game Two that he barely made a blip. The big beneficiary of Abdelkader’s suspension is Mikael Samuelsson, who will shift up to the Wings’ top line. Samuelsson has had an injury-plagued season, and he just made his playoff debut in Game Three, so the rust is still being shaken off. He took one penalty and managed a couple of shots on goal, but Detroit could sure use the Vancouver version of Samuelsson if it is going to come back in this series.

While Detroit got shut out and looked pretty awful at home in Game Three, it’s just one win away from turning this into a best of three series, so there’s really no need to panic — especially considering how much playoff experience the Coach Mike Babcock’s crew has.

By RotoRob
This entry was posted on Monday, May 6th, 2013 at 3:21 pm and is filed under Fantasy Notes, HOCKEY, RotoRob. You can follow any responses to this entry through the RSS 2.0 feed. Both comments and pings are currently closed.