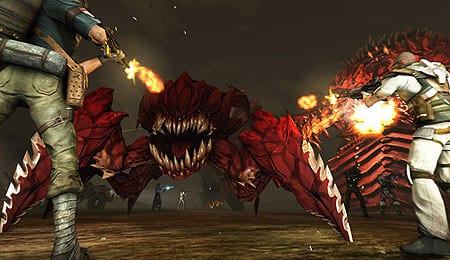 You’ll be killing a lot of hellbugs.

In all my time as a gamer, I’ve played exactly two massively multiplayer online games: Phantasy Star Online (on the Dreamcast) and Final Fantasy XI (PlayStation 2). Well, thanks to Trion Worlds, we’re increasing that number to three with the release of Defiance, a shooter MMO that’s connected to the recently launched television show of the same name on SyFy. It’s not going to be mistaken for a AAA shooter anytime soon, but there’s something about it that still manages to connect.

Two third-person shooters that immediately sprang to mind when playing Defiance were the Sniper Elite and Earth Defense Force series — rough around the edges yet still eminently playable. Aiming down sight in Defiance engages an auto lock on your target, which is both a blessing and a curse. It squares enemies up nicely, but since bullets to the midsection seem to do about as much damage as an infant punching a rock you’re constantly adjusting to pummel the head.

Beyond guns, your ark hunter also has access to a grenade (right bumper) and special ability (left), which operate off a cooldown timer once used. You can only have two guns, one explosive and one skill active at any one time, but as you level up you unlock addition loadouts. These can be switched to at any time through the start menu — though it’s worth noting that the game does not pause so cycling through your pre-sets during combat isn’t ideal.

You’ll also spend a fair amount of time driving around the expansive map — vehicles can be summoned by pressing up on the d-pad — but outside of a few optional time trials there’s not a lot to do. It functions adequately for what it is.

While not the ugliest game on the market, Defiance won’t be wowing anyone, either. The vast world is disappointingly homogeneous, which is an issue that extends to your foes; you’ll also be seeing and fighting the same handful of enemy types over and over again. Player and weapon customization aren’t as robust as I would’ve liked, either.

Although Defiance generally does a good job of minimizing detectable lag, it does make some significant concessions during those instances when large numbers of gamers gather in one area. I’m not just talking about dips in the frame rate or dropped audio, either. What happens is that when you get too many people together every single one of them takes on your default appearance!

Now, given that new wearable gear is purely cosmetic (much of it is either a reward for advancement or even sold for real money) it kind of defeats the purpose. Why sink time into your appearance if every time you get around a bunch of people all they see are clones? Perhaps a future patch will address it, but for now it’s a disappointment.

Cut scenes are voiced competently, and those that have watched the first couple of episodes on SyFy will recognize some cameo appearances. The music and sound effects are fairly generic… like most presentation aspects of the game they do enough to get by but little more.

Set in the same world as the TV show, the video game version of Defiance takes place in and around San Francisco. With the show set in St. Louis, however, I never felt like the tie-in was as deep as it could’ve been. Plus, the game doesn’t do a very good job of explaining the back story of the world you’re in with most of my knowledge of it coming from watching the two-hour premiere.

That being said, the game’s story-driven missions are the high point of the PvE (Player vs. Environment) sections as both the story arc and characters introduced are interesting enough to drive the action forward. You’ll frequently be paired with an A.I. counterpart during these missions, but they rarely offer much in the way of assistance beyond providing your enemies with another viable target.

Between the storyline, side missions, in-world encounters, Ark falls (read: random battles with bugs, mutants, etc.) and challenges there is a ton of content here. The problem, however, is that so much of it feels exactly the same. Trigger a mission, go to the location, scan/kill/locate X number of items, fight off whatever enemy infests that area and collect your reward. It’s not bad or uninteresting per se, it’s just that fairly early on all these encounters tend to blend together.

Defiance also suffers from the EGO leveling system. Any experience you earn eventually levels up your EGO, which allows you to unlock powers and abilities that boost your character. Those boosts don’t make substantial changes to the gameplay, however, and since only one of the four possible abilities can be equipped at once it made me feel like I was perpetually stuck in neutral. In previous MMOs a more powerful version of you could revisit areas and dominate enemies. Not here. No matter how many missions I completed I always felt just as vulnerable.

Then there’s the solitary nature of the game, which runs counter-intuitive to the MMO spirit. Outside of Ark falls, which typically draw so many people together for loot and currency that any semblance of teamwork is both unnecessary and unworkable, it’s rare to see characters travelling together. There were times I’d stumble on another player tackling the same mission, and if someone is in trouble they usually get helped out, but there’s almost no sense of community.

In addition to the main PvE mode, Defiance also features a handful of co-op only sections as well as a PvP multiplayer. Both modes are fairly enjoyable, albeit a bit simplistic, but once again you run into some of the same issues we’ve touched on already. For example, I was part of a four-person team with someone that was literally hundreds of EGO levels ahead of me and their weaponry did no more damage than my own modest guns. In fact, during the end-game summary it showed I had dished out the most punishment in my team despite being the lowest level. What’s the point of grinding out level after level if you never get to reach the point of legitimate bad assery?

Defiance is a bit of an odd duck. There are more than enough drawbacks (repetitive quests, poor enemy A.I., disappointing leveling system) to tell gamers to steer clear, and yet in spite of all of that I enjoyed the majority of my 30-plus hours with it. Bottom line: if you can embrace the gameplay then Defiance becomes a serious bargain as there’s a ton of content.

By HC Green
Tags: Phantasy Star Online, Video Game Review
This entry was posted on Saturday, May 4th, 2013 at 11:55 am and is filed under Herija Green, Video Game Reviews. You can follow any responses to this entry through the RSS 2.0 feed. Both comments and pings are currently closed.