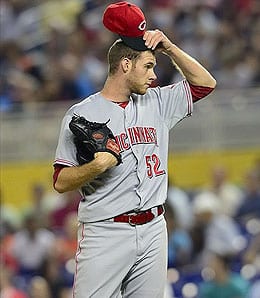 Tony Cingrani may get his shot in Cincy.

Last week was a total nightmare for Fantasy owners. Zack Greinke suffered a fractured collarbone and is lost for two months. Jose Reyes suffered an ankle injury Friday that could sideline him for up to three months. Joining them this week on the DL are Erick Aybar, Wilson Ramos, Jason Kubel, Gordon Beckham, Yoenis Cespedes, and Kyuji Fujikawa. Toss in Jason Kipnis, Giancarlo Stanton, and Coco Crisp — all currently day-to-day — and it’s left some rather gaping holes in our lineups. Oh, did I forget to mention that we’re still waiting for news on Johnny Cueto and the extent of his forearm injury?

It’s going to be tough sledding for the next while so let’s get right to it and see what the Troll has to offer in the form of respite.

Tony Cingrani, SP, Cincinnati Reds (CBS: 36 per cent owned, ESPN: unowned): Johnny Cueto left Saturday’s start with a strained forearm and we’re still awaiting a definitive prognosis. Cingrani is the current option as a replacement in Cincinnati and is off to an amazing start. In his first start for Triple-A Louisville, the 23-year-old southpaw tossed six innings of near perfect ball (one free pass), striking out 14 in the process. He slumped a bit in that second start, allowing three hits and a walk in 6 1/3 IP with only seven strikeouts. Even if Cueto avoids a trip to the DL, how long can the struggling Mike Leake hold off this hard-charging prospect? Our guess is that’s coming sooner rather than later.

Nick Hundley, C, San Diego Padres (CBS: 7 per cent owned, ESPN: unowned): Last year was an unmitigated disaster for Hundley. However, Yasmani Grandal’s PED suspension has given Hundley a second lease on life and so far he is taking full advantage of the opportunity. Hundley is currently hitting .333 with one homer, three RBI, and five runs scored. Is he a .300+ hitter over the long haul? Probably not, but in two-catcher leagues he should be in play.

Will Venable, OF, San Diego Padres (CBS: 9 per cent owned, ESPN: unowned): In the past week, Venable has gone 7-for-18 with two homers and eight RBI, scored five runs and swiped a base for good measure. Yes, he strikes out too much but he’s on a tear right now and will be playing full-time for the short term thanks to the eight-game suspension incurred by Carlos Quentin. Taking advantage of Venable’s increased playing time could lead to some very solid results for your Fantasy squad.

Cody Ross, OF, Arizona Diamondbacks (CBS: 19 per cent owned, ESPN: 1 per cent): Jason Kubel hit the DL and Ross has been activated. We were a bit surprised to see Ross owned in so few leagues. He’s coming off a very solid 22-homer, 81-RBI season with the BoSox and should be a good source of power over the balance of 2013.

Chris Capuano, SP, Los Angeles Dodgers (CBS: 17 per cent owned, ESPN: 2 per cent): Zack Greinke is lost for the next two months after suffering a fractured left collarbone when Quentin charged the mound last week. In 198 1/3 IP last season, Capuano produced a solid 3.72 ERA and nice 1.22 WHIP, with 162 strikeouts on his way to 12 wins. He’s no Greinke, but should be more than adequate until his return.

Patrick Corbin, SP, Arizona Diamondbacks (CBS: 26 per cent owned, ESPN: 1 per cent): Two starts, two wins. Corbin is not flashy, but is quietly and effectively getting the job done.

Marwin Gonzalez, SS, Houston Astros (CBS: 14 per cent owned, ESPN: 15 per cent): When Ronny Cedeno is your stumbling block to increased at-bats, you’re going to get your shot.

Conor Gillaspie, 3B, Chicago White Sox (CBS: 3 per cent owned, ESPN: unowned): He’s off to a 10-for-23 start and looking at full-time at-bats for the next 6-to-8 weeks while Gordon Beckham recovers from wrist surgery.

Jordany Valdespin, OF, New York Mets (CBS: 10 per cent owned, ESPN: unowned): “When Jordany plays, he’s going to lead off” says Mets Manager Terry Collins. With six hits in 14 at-bats last week, Valdespin could be leading off more frequently in the near future.

Kurt Suzuki, C, Washington Nationals (CBS: 11 per cent owned, ESPN: unowned): Suzuki’s job share with Wilson Ramos has been put on hold as Ramos hit the DL with a hamstring injury. Given Suzuki’s low ownership rates, there is a short-term opportunity here.

Josh Donaldson, 3B, Oakland Athletics (CBS: 23 per cent owned, ESPN: 9 per cent): Very quietly Donaldson has been getting it done for the A’s. In the last week, he’s been on a tear, going 10-for-26 with two homers and seven RBI.

Brandon Crawford, SS, San Francisco Giants (CBS: 20 per cent owned, ESPN: 3 per cent): We’re anticipating growth in the power numbers and an improving BA this season so as a temporary fill-in, Crawford should provide decent value and help ease the pain if you’re suffering from the infield blues.

Stephen Drew, SS, Boston Red Sox (CBS: 38 per cent owned, ESPN: 6 per cent): Drew returned from his stint on the DL last week and was immediately inserted into the Boston lineup. A return to the mid-teen power and 50-60 RBI form he had in the desert would be a huge bonus.

Seth Smith, OF, Oakland Athletics (CBS: 8 per cent owned, ESPN: 2 per cent): Isn’t it amazing how a crowded outfield can become uncluttered in a hurry? Smith has charged out of the gate and is currently batting 11-for-24 with one homer and six RBI. Playing time shouldn’t be an issue for the next several weeks.

Oswaldo Arcia, OF, Minnesota Twins (CBS: 5 per cent owned, ESPN: unowned): Aaron Hicks is floundering and looks completely overmatched. A trip to the minors should be right around the corner. Arcia is off to a ridiculously good start at Triple-A Rochester and is worthy of a pre-emptive strike in AL-only formats. Just note that Arcia is not a centrefielder, so wouldn’t necessarily replace Hicks, but his hot bat is needed in a lackluster Twin lineup.

Andrew Bailey, RP, Boston Red Sox (CBS: 20 per cent owned, ESPN: 13 per cent): Joel Hanrahan is off to a rocky start. He totally imploded against the Orioles on Wednesday and followed that up by walking the first two batters he faced Saturday before being pulled by Manager John Farrell. The BoSox pen is very deep and talented, so any lingering struggles by Hanrahan could lead to a demotion. The leash has gotten considerably shorter and with Bailey, Koji Uehara, and Junichi Tazawa all off to very strong starts, Hanrahan better get his act together pronto.

Santiago Casilla, RP, San Francisco Giants (CBS: 10 per cent owned, ESPN: 1 per cent): On last week’s Podcast, RotoRob and I expressed concern about the heavy workload incurred by Sergio Romo already this season. Lo and behold, Romo blows up Friday and who do we see in the ninth on Saturday? Santiago Casilla. Romo isn’t in any danger of losing the job but you can bet your life that you won’t see him carrying the workload he did in the first part of the season. Casilla should be good for 5-to-7 saves this season — and that’s assuming Romo doesn’t wind up on the DL at some point.

Wesley Wright, RP, Houston Astros (CBS: 1 per cent owned, ESPN: unowned): Jose Veras has been struggling (to say the least) and on Saturday he handed the Angels a rare victory. Since getting lit up in his season debut, Wright has posted five consecutive scoreless appearances. Rhiner Cruz and Hector Ambriz have looked far from spectacular early on, but could also be in the mix for saves should Veras continue to struggle.

James Russell, RP, Chicago Cubs (CBS: 8 per cent owned, ESPN: 7 per cent): Last week’s recommendation of Kyuji Fujikawa was very short lived as he landed on the DL with a strained right forearm. Both Russell and Shawn Camp should be in the mix for saves until his return.

By Tim McLeod
This entry was posted on Sunday, April 14th, 2013 at 1:32 pm and is filed under BASEBALL, The Wire Troll, Tim McLeod. You can follow any responses to this entry through the RSS 2.0 feed. Both comments and pings are currently closed.