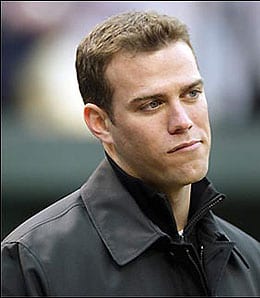 Will wonderboy Theo Epstein be able to turn around the Cubbies?

Hey, Chicago Cubs fans. Your team is coming off its first 100-loss season since 1966, but that’s okay. Surely they have plenty of tricks up their sleeves in an effort to rebound. After all, we all know what a magician Theo Epstein is, right?

With this in mind, let’s review the key moves the Cubs have made so far this offseason.

Other than internal 40-man roster moves, the first player addition of the offseason occurred on October 16 when the Cubs got Marcelo Carreno from the Tigers to complete the Jeff Baker deal that happened at the end of the August. Carreno, a 21-year-old right-handed starting pitcher, repeated Class-A this year with much better results. He’s ready to move up to High-A and is a decent mid-level prospect.

On October 24, the Cubbies claimed Carlos Gutierrez off waivers from the Twins. A first round pick in 2008, Gutierrez was a closer in college, but the Twins tried him as a starter before shifting him back to the bullpen as a long reliever. He hasn’t had any sustained success above A-ball and his 2012 season was reduced to just 10 appearances because of shoulder surgery. We’re not overly bullish on this addition and given that he cleared waivers and was outrighted to the minors, no one else is exactly holding their breath for Gutierrez to suddenly figure it out.

To make room for Gutierrez, catcher Anthony Recker was designated for assignment and subsequently claimed by the Mets. No great loss.

A few days later, reliever Manny Corpas refused his minor league assignment and became a free agent. In his first year back from Tommy John surgery, Corpas was too hittable, so no big loss here, even though he theoretically could return to the organization.

Chicago’s first move of November was to claim Zach Putnam off waivers from the Rockies. The team clearly had big plans for him, non-tendering him at the end of month and thereby allowing him to become a free agent.

On November 14, the team made a move that could actually pay dividends, signing free agent starter Scott Baker, currently rehabbing from Tommy John surgery, but on pace to return early next season. The Cubs bought low here and that’s smart. Baker has struggled to stay healthy in recent seasons, but he looked really good in 2011 when he did pitch.

On the 16th, catcher Dioneer Navarro was penned to a one-year deal worth $1.75 million plus $250,000 in incentives. We expected Navarro to be among the top 45 when we did our preseason Catcher Rankings, but he didn’t quite meet our expectations, probably slotting about 10 spots below that. It wasn’t because of his performance – Navarro actually enjoyed his OPS since he was an All-Star for the Rays in 2008. It’s just that he only played in 24 games for the Reds, spending most of his time at Triple-A. This is another decent buy-low move as Navarro may still have some life in his game. Besides, perhaps as Matt Garza’s former battery mate he can help the embattled starter bounce back from a season in which he dealt with elbow problems (assuming Garza isn’t traded, that is).

On November 19, the Cubs took care of their own, re-signing free agent reliever Shawn Camp. He’s no spring chicken and tied for the MLB lead with 80 appearances, so there’s reason to worry about how he’ll hold up, but it’s an inexpensive one-year deal – not a risky move. The veteran stands to make bonuses based on appearances, so he’ll cash in nicely if he stays healthy and is again effective enough to see plenty of action.

On November 20, the Cubs said goodbye to Bryan LaHair, designating him for assignment. He wound up penning a two-year deal in Japan, and thereby immediately moving to the top of Tim McLeod’s 2015 sleeper list.

Bogusevic saw plenty of action with the Astros and he’s got speed, but his offensive game went into the tank after showing promise in 2011.

Chavez is young enough to have upside, but he dealt with injuries this year. Still, he improved his walk rate and showed enough development at Double-A to be at least somewhat intriguing. Just two years ago, he looked like a serious prospect, so this move may pay dividends yet.

Gonzalez is a veteran of six big league seasons and over 400 games. This year, he hit a bit better in the bigs, but only saw 24 games of action with the Rangers. He also hit well when farmed back to Triple-A, so if nothing else Gonzalez offers organizational depth.

Boscan has seen a bit more action in each of the last three seasons with the Braves, but considering the 10 at-bats he got this year represented his career high, he’s obviously pretty green. And it’s not as if he did anything during this brief look. Boscan saw plenty of action at Triple-A and hit a bit better, but that’s not saying much. There’s nothing to see here.

The following week, the Cubs made another move to bolster the rotation by signing Scott Feldman to a one-year deal. Last year, the Rangers’ rotation was so healthy that he didn’t get a chance to start much, but a wave of injuries this year thrust Feldman back into a starter role for most of the season. As usual, he was much better in relief as his ERA skyrocketed whenever he had to start. Still, at just $6 million, this move could be useful for the Cubs as Feldman’s secondary numbers suggest he’s improving. Getting out of Rangers Ballpark won’t hurt, either.

On the 30th, the Cubs non-tendered both third baseman Ian Stewart and RHP Jaye Chapman. They would up re-signing Stewart the following week, but probably saved themselves a few bucks by not going through the arbitration process. He bounced back somewhat last season and saw more action, but is still a far cry from the player he was with the Rockies between 2008 and 2010.

As for Chapman, he struggled with his control during his brief time with the Cubs, but his bottom line results weren’t bad. After striking out on signing free agent reliever Jason Grilli, the Cubs may turn their attention back to Chapman and try to bring him back.

On December 5, the Cubs made a move at the Winter Meetings, signing outfielder Nate Schierholtz to a one-year deal. Split between the Giants and Phillies this year, his counting stats were way down, but in Chicago he could get a chance for major PT, depending on whether top prospect Brett Jackson is ready or not.

The following day, the Cubs made their biggest splash yet, signing Japanese closer Kyuji Fujikawa to a two-year, $9.5-million deal. He’ll set up closer Carlos Marmol, but you know it’s just a matter of time before Fujikawa takes the job.

Five days later, Chicago grabbed reliever Sandy Rosario off waivers from Boston, a nice addition considering how good he looked at Triple-A this season. He’s got seriously fine control. The team is desperate to improve its bullpen, so added depth like this was a smart play.

A similar move was the signing of reliever Chang-yong Lim to a minor league deal. He’s recovering from Tommy John surgery, but has a ton of experience in Korea and Japan and could be ready to contribute by midseason.

The Cubs aren’t expected to make any more big moves between now and the start of the 2013 season, although they would love to deal Marmol, Alfonso Soriano and possibly Garza.

Given that landscape, it’s clear the Cubs are again going to make a run at 100 losses in 2013, but that’s part of the plan: rid itself of all the big contracts and then build organically through the system, either using those players as homegrown talent or as trade fodder to pry stars from other teams.

This is a long-term plan that we probably won’t be able to fully assess for another three years or so. We hope you Cubs’ fans are a patient lot, but we’re guessing that’s sort of a mandatory requirement when rooting for a team that has now gone 104 years since winning the World Series and hasn’t even gotten back there since 1945.

By RotoRob
This entry was posted on Tuesday, December 18th, 2012 at 2:39 pm and is filed under BASEBALL, RotoRob, Team report, Transactional analysis. You can follow any responses to this entry through the RSS 2.0 feed. Both comments and pings are currently closed.