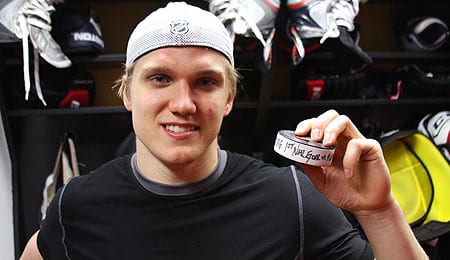 By the time this hits the presses, it will be Easter Sunday. While everyone stuffs their faces silly with all the ham, meats, and trimmings, we here at The Wire Troll attempt to find you bargain basement players that can help your Fantasy teams as the playoffs approach. This is the time of year when the contenders and pretenders separate and we find out who really deserves to reign supreme.

The sad part is in just four weeks the season will be completely over, except for those playoff pools. There are just 27 days to go. Fantasy owners are looking for any possible edge to get that “one over” on their opponents. Times are going to get tough. The question is are you ready to answer when your opponent is better than you? The decisions now get harder and harder. However, we trudge on with this week’s edition to try to bring clarity to your quest for Fantasy hockey glory.

Vladimir Tarasenko, RW, St. Louis Blues: Tarasenko is surely a talent and a scary good one at that. Since his comeback from a concussion earlier in the season, the forward was oh so close to scoring so many times in the six-game stretch. Then he exploded for both goals against the Los Angeles Kings in a 4-2 loss. After 23 games, the Russian has 16 points and remains on track for a potential Calder Trophy nod. The four points in six games so far is a good indication of a solid April to come even if the Blues fall out of playoff contention.

Jakob Silfverberg, LW, Ottawa Senators: I understand last week was very so-so for Silfverberg, but he is starting to put it together with seven points overall in his last eight games. Also his ice time has come up to a hair over 18 minutes per game over the last 12 contests. As Ottawa gets into its toughest month, it will be a make or break time for Fantasy owners and Silfverberg has shown flashes that he will not wilt gently, at least production wise. The fact that he does get increasing amounts of time on the power play should hopefully help your Fantasy bottom line.

Cam Atkinson, RW, Columbus Blue Jackets: Atkinson’s last four games have been too noticeable to just dismiss as happenstance. The ankle injury that has dogged him all season seems to be either a memory or very close to being one. Atkinson’s speed and agility are obvious but the hands are an added bonus. Columbus is so close to a playoff spot and it may be this rookie that helps determine its fate (along with goaltender Sergei Bobrovsky). Yes, the hockey gods can prove to be that crazy. A Columbus draft pick may just pan out once again. Hey it happened with Rick Nash, right?

Now for the sad news… injuries and setbacks!

Jason Spezza, C, Ottawa Senators: Apparently those reports from RDS a few weeks ago were true after all. Either way, it appears Spezza will not be back for April as it stands right now. Basically this is a nice way of saying that he has no Fantasy value until next season.

Paul Martin, D, Pittsburgh Penguins: Martin was having such a nice little season in Pittsburgh and then a broken bone decided to sideline him for the next six weeks. Again, this is in the upper body region, so take it as you may. The fact remains that Martin will no longer provide your Fantasy team with any points this season so keep him in dynasty leagues but dump him in redraft leagues.

That is it for now. See you next week on The Wire Troll and as always you can follow me @ChrisWasselTHW.

By Chris Wassel
This entry was posted on Sunday, March 31st, 2013 at 2:06 pm and is filed under Chris Wassel, HOCKEY, The Wire Troll. You can follow any responses to this entry through the RSS 2.0 feed. Both comments and pings are currently closed.