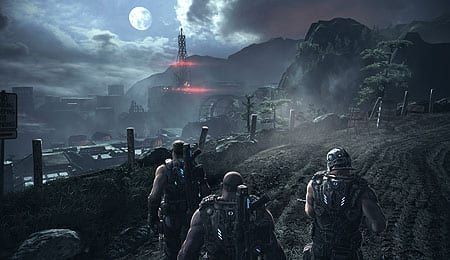 The years have not been kind to Halvo Bay.

Outside of Halo, no Xbox 360 exclusive means more to Microsoft than Epic’s Gears of War, which was the first game to truly exhibit the console’s potential. So, just as Halo got a non-numeric prequel in Reach, now Gears has been given a chance to author its own origins story with Judgment. Developer People Can Fly was handed the reins this time around and has made some notable tweaks to the series’ formula — for both the better and the worse.

Although the core shooting, melee and active reloading elements remain unchanged, Judgment eschews the four-pronged d-pad weapon swapping seen in the previous games. Grenades can now be thrown at any time using the left bumper, and your number of available weapons has been reduced to two (the pistol slot has been removed). Moving from cover to cover is as smooth as ever, and though series vets may instinctively use the d-pad early on, it quickly becomes a non-issue.

Given that Gears of War has been one of the best looking series on the Xbox 360 since its inception, it should come as no surprise that Judgment delivers all the detailed environments and healthy levels of gore fans have become accustomed to. This isn’t an adventure on the scale of the previous three games, though, so the variety of locations is a bit lacking by comparison.

The familiar voices of Cole and Baird return, both of which are well done. Still, make no mistake, this is Baird’s story first and foremost, and as such Cole is relatively muted when compared to his boisterous antics seen throughout the trilogy. The absence of Marcus Fenix’s gravely chords is definitely felt as well, as his somber demeanor is a better fit as a lead character in such a horrific setting. Both the score and intense sound effects hit their mark.

Set before the events of the original Gears of War, Judgment tells the story of Kilo Squad, which includes series regulars Baird and Cole as well as newcomers Garron Paduk and Sofia Hendrik. The game opens with your group being brought before a makeshift war tribunal led by Colonel Loomis, who means to meter out justice for your insubordination. Chapters then play out as testimony with all four characters getting a turn in the catbird seat to recount the events that led them to their current predicament.

This setup allows for Judgment’s biggest change. Instead of one drawn out campaign, the game breaks up the testimony into bite-sized chunks that are scored individually. Each segment also contains the option to “declassify” information. Doing so imposes certain criteria or restrictions (think skulls in Halo) that tack on added difficulty in exchange for higher multipliers and more points, which when handled successfully help you reach the three-star maximum.

While there’s no doubt some will enjoy the relative change of pace, others will find it hurts the continuity of the story to be looking at a level breakdown every 5-to-10 minutes. I fall somewhere in the middle. I appreciate that People Can Fly changed things up a bit, but as the campaign advances the sections start to bleed together. This is especially true if you choose to declassify everything as the challenges (low visibility, limited ammo, more enemies, etc.) repeat quite liberally.

New weapons and enemies have been added, and as long as you can avoid thinking about the usual prequel issues of “if these guns/foes existed before the other games why am I seeing them for the first time now?” they should be welcome additions. There are also some minor tactical changes from the original trilogy, which heavily skewed toward cover-based engagements. You certainly still have that here, but you’ll also spend a significant amount of time moving and quickly engaging foes — in fact, with some of the challenges imposing a time limit pushing forward becomes mandatory.

Between the underdeveloped story and short run time (roughly five hours), this is easily the weakest single-player experience in the series. Judgment does present another mini campaign, though, which tells the story of how Baird and Cole acquired the reinforcements that arrive to help Marcus near the end of Gears of War 3. Dubbed “Aftermath,” it does away with the game’s new ideas and focuses on the series’ more traditional gameplay, which made it my favourite part of the campaign.

Multiplayer is emphasized as well, both co-operative and competitive. Co-op play revolves around tackling the campaign with friends or randoms as well as the newly added Overrun mode, which essentially takes Horde and Beast mode from Gears of War 3 and rolls them into one. Here you’ll take turns playing as class-based COGs (soldier, medic, engineer and scout) and increasingly powerful Locusts, attacking and defending emergence holes. It’s a legitimately fun addition and one that should offer the most online enjoyment.

Competitive multiplayer, however, feels incredibly stale. Matches still revolve around people moving unrealistically from cover to cover and/or rolling around to try to gib someone with their Gnasher. In fact, the smallish maps (of which there are only four) make mid- and long-range weapons feel more useless than ever. Add that to the meager number of modes (three: Free-For-All, Domination and Team Deathmatch) and you’ve got an already familiar experience that gets repetitive very fast.

Gears of War Judgment suffers many of the pitfalls Halo 3: ODST did — it just had the good sense not to announce it wasn’t considered a full release only to be changed during development. As a US$40 one-off it’d be easier to overlook the short, chopped up campaign and gnasher-centric multiplayer that has all but eliminated any semblance of strategy from PvP. It’s not a bad game by any means, but judged against the first three titles it comes up short.

By Herija Green
This entry was posted on Friday, March 29th, 2013 at 10:16 am and is filed under Herija Green, Video Game Reviews. You can follow any responses to this entry through the RSS 2.0 feed. Both comments and pings are currently closed.