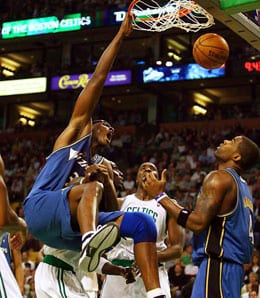 Now that he’s healthy again, Brendan Haywood should be doing plenty of jamming for the Wizards.

The 2009-10 RotoRob NBA Draft Kit is back, as we churn out another team preview, today examining a team many expect will undergo a big-time rebound this season.

The Washington Wizards were one of the NBA’s worst teams last season, racking up a franchise record-tying 63 losses while finishing dead last in the Eastern Conference – by a shocking 13 games. Their offense was pretty bad, and their defence wasn’t much better. After four straight seasons in the playoffs, they spent their first April watching the postseason from the couch since 2003-04.

The good news is this team is poised to bounce back in a big way, perhaps more than any other NBA team.

Let me count the ways: a supposedly healthy Gilbert Arenas back running the point; a full season of a healthy Brendan Haywood solving the revolving door at centre; the addition of Randy Foye and Mike Miller, adding major depth to the team’s backcourt and giving it a stronger perimeter presence; and a new coach who has guided his teams to wins nearly 60 per cent of the time.

The Wizards aren’t exactly ready to take on the Beasts of the East yet, but they will definitely be in the mix for a playoff spot. I’m expecting Washington to battle with Philadelphia, Toronto, Detroit and Charlotte for the final two playoff berths in the East.

The key is a full season of Agent Zero. Reports this summer about Arenas’ recovery have been very encouraging. He’s lost weight, his speed is back and he’s not favouring his knee. Could he once again be a first round Fantasy talent? Owners will be wary to use a first round pick on a player who has only managed to get into 15 games in the last two seasons combined, but if he’s capable of approaching the numbers he put up between 04-05 and 06-07, then Agent Zero is absolutely worth the gamble. Personally, I see him as a mid second-round pick, but I wouldn’t be shocked to see someone nab him in the top 10.

Shooting guard should be a battle royale. I’m expecting Foye to start, especially considering that as a swingman, Miller is an ideal sixth man. But if Foye is needed to spell Arenas at PG or – gasp — if Agent Zero gets hurt again, Miller will be the starter. But let’s not forget about Stevenson. He might be the best defensive player the Wizards have and some team insiders believe he’ll be given a chance to reclaim the starting two-guard job.

If he can truly stay healthy, obviously Arenas is the best man to own on this squad, but the risks are too high for me to peg him as a stud. For that honour, I’m giving the nod to Jamison, who enjoyed one of the finest seasons of his career last year. He wasn’t quite the rebounding machine he was in 2007-08, but he does enough of almost everything to be a premium talent, and even at the age of 33, Jamison is showing no signs of slowing down.

I wouldn’t exactly call him a “dud,” per se, but those expecting Butler to again be a major stud like last season when he scored 30 or more points 11 times are setting themselves up for a disappointment. With Arenas back and Miller and Foye in town, touches will be harder to come by, and Butler is the likeliest of players to suffer. On the plus side, he’s lost a lot of weight in the offseason, so hopefully that will help him stay healthy (it’s been four years since he last reached 75 games), but I just don’t see him averaging over 16 shots per game this season like he did in the two years that Arenas was hurt.

Javaris Crittenton got better and better as the season wore on, and I still think he’s got great long-term potential, but how the hell is he going to get enough minutes to be Fantasy worthy in such a loaded backcourt? It’s going to take an injury or two to make him a useful in-season pickup.

Andray Blatche was such a Fantasy darling heading into last season, but despite plenty of chances, he never really delivered. I’m a bigger believer that McGee (who had a very fine Summer League) will prove useful, but with Haywood healthy, neither of them are worth considering this season.

People are going to forget about Haywood on draft day, but I think that’s going to be a big mistake. He’s healthy, no longer has to beat the shit out of Etan Thomas for a job (both literally and figuratively), and given more minutes, will surprise people. I can see him putting up 12 points, eight to nine boards and at least two blocks per game. That’s some solid production from a centre who can be had very late in your draft.

After failing to bag the No. 1 overall pick in the lottery and dropping to No. 5, the Wizards dealt the pick to Minnesota for Miller and Foye. The team then sold its second round pick (No. 32 overall), Jermaine Taylor, to Houston. As a result, Washington has no rookies currently under contract.

Does Stevenson really have a chance to start or is he going to be stapled to the bench? Can Butler stay healthy enough to play even 70 games? Is Crittenton going to fritter away his potential on the bench? Is Arenas again an elite NBA player or will the pounding of a full season take its toll?

By RotoRob
This entry was posted on Sunday, September 13th, 2009 at 2:47 pm and is filed under 2009-10 RotoRob NBA Draft Kit, BASKETBALL, RotoRob, Team report. You can follow any responses to this entry through the RSS 2.0 feed. You can leave a response, or trackback from your own site.