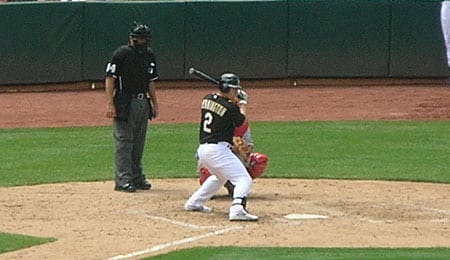 Cliff Pennington is gunning for the D-Back shortstop gig.

New D-Back shortstop Cliff Pennington flashed a little something-something with the bat Tuesday, going 2-for-2 with a two-run jack to help ‘Zona bitch slap his former team, the A’s. He’s known for his glovework and offers some decent speed, but pop? That’s not exactly Pennington’s thang — he managed just six dingers last year and has accumulated all of 24 homers in nearly 1,750 career at-bats. He’s currently in a position battle with Willie Bloomquist to be the Diamondbacks’ everyday shortstop and if he wins the gig, he’ll be a NL-only option. Of course, if he can’t win the job over Bloomquist, well, that’s just pathetic. Let’s just hope Pennington can bounce back from that ugly .215 BA last year.

Jason Kubel also spanked a two-run shot Tuesday — his first of the spring. Last month on a Podcast, we speculated whether Kubel was on his way out of ‘Zona, but the team kept him and says it’s happy it did. Now we’ll see if he can build on a season in which he had a career high in runs, homers and walks. Staying in the desert is a bonus for Kubel’s Fantasy value after he managed his first 30-homer campaign.

Venezuela, a serious WBC darkhorse, will boast three Diamondbacks — Gerardo Parra, Martin Prado and Miguel Montero — as it tries to make some noise in the tourney which kicks off next week. Parra is again slated to be the fourth outfielder in Arizona, but damn, we’d love to see what he can do with full-time at-bats. He went 2-for-2 with a homer and three RBI Tuesday, proving he’s ready to rake for Venezuela. Should injuries open up the door for more PT for Parra, he’d be a great mixed league option. As is, he should have NL-only use.

So much for Zack Wheeler’s first career Spring Training start. He hurt his side muscle swinging a bat before the game and has been scratched from his start on Wednesday. This sounds like a very minor injury, but it certainly doesn’t help his chances of bagging a rotation spot to start the season. Wheeler was expected to begin the year at Triple-A and that eventuality is even more likely now.

Albert Pujols is making nice progress from offseason knee surgery and he’s expected to begin running the bases soon. He’s already taking BP and running on a treadmill as he targets a mid-March return to the Angels’ lineup.

Crave more in-depth Fantasy analysis? Then join us every Thursday at 9 p.m. EST for RotoRob’s Fantasy Baseball Weekly Podcast on Blogtalkradio. Note that we’re skipping this week’s Podcast (February 14) so we can spend quality time with our loved ones/gummy bears. Tim McLeod and I will entertain and edify you for a half hour or more each week. Tune in here.

By RotoRob
This entry was posted on Wednesday, February 27th, 2013 at 2:36 pm and is filed under BASEBALL, MLB Today, RotoRob. You can follow any responses to this entry through the RSS 2.0 feed. Both comments and pings are currently closed.