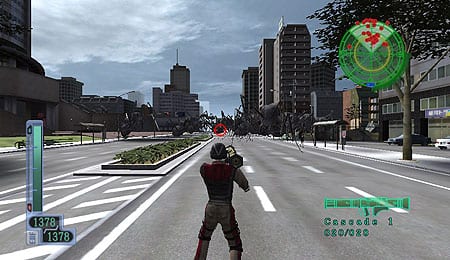 I don’t think bait stations are gonna do the trick this time.

When it was announced that Sony’s PlayStation Vita would feature dual analog sticks, portable gamers salivated at the promise of a true console experience in the first- and third-person shooter arena. As owners of the system are keenly aware, however, the results have been disappointing with titles like Resistance: Burning Skies and Call of Duty: Declassified failing to live up to the lineage of their respective series. Can D3Publisher avoid the pitfalls as it transitions Earth Defense Force 2017 to the system? Or are gamers destined to be disappointed once again?

Games don’t get much simpler than EDF 2017 Portable as, outside of switching guns with the circle button, you’ll use the analog sticks and shoulder buttons almost exclusively — the left controls jumping and evading while the right fires your weapon. It works well enough, though sometimes the camera feels like it’s pulled in a bit too tight given the small screen and plus-sized enemies. You’ll also have the chance on some levels to pilot vehicles, all of which handle adequately.

Were one to start listing the virtues of the EDF series it would take a long while before the visuals made an appearance. Even on the Vita’s OLED screen, which has a generally excellent picture, EDF 2017 looks decidedly last gen with loads of pop in and clipping. Enemy variety is minimal and many of their over-the-top animations look goofy. In spite of those technical shortcomings, EDF 2017 contains a certain level of charm when you’re scattering giants bugs, collapsing buildings with a stray rocket or taking down hulking robots amid fiery explosions.

It’s a little tougher to find such a silver lining on the audio front, however, with the in-game chatter and narration being equal parts repetitive, ineffectual and annoying. Weapon fire is muted and lacks any semblance of impact while the frequent roars of your foes becomes grating in short order. Background music is serviceable.

Plot isn’t central to your enjoyment of Earth Defense Force 2017 Portable, which is a good thing since the minimalist approach that’s in place does little more than let you know that Earth has been invaded and said assailants have been dubbed “ravagers.” Pre-level updates from the EDF offer up some idea of how the war is going, but ultimately it doesn’t matter in the slightest. Your job is to square off against whatever the ravagers throw at you — ants, spiders, robots, etc. — and kill it. That’s it.

Such a basic premise falls in lock step with the simple controls and visuals, and the usually bite-sized missions are well suited to the portable format. This isn’t quite a straight port of the 2007 console release, either, as seven new levels have been added (pushing the total to 60, each with five difficulty settings) along with new weapons and the Pale Wing class, which plays quite differently than the default soldier thanks to a jetpack and energy-based weapons.

Beyond offering the joy of killing giant bugs and robots, EDF 2017 also turns every mission into a quest for loot as defeated enemies frequently drop items for you to scoop up. These are divided into health, armour and weapons. Health restores your life bar, armour increases your permanent overall health by one (after the successful completion of the level) and weapon pickups are self explanatory. The higher the difficulty setting, the better the loot, though you’ll still snap up plenty of duplicate guns along the way.

Gone from the console version (of course) is split-screen co-op and replaced by a pair of online modes — one competitive (not very good) and one cooperative. As with previous releases, co-op is where it’s at, and the ability to have four players instead of two makes it a more enjoyable experience. You may encounter some lag, but that’s not the real issue. Lack of participants is. Far too often I’d jump into the lobby and find it completely empty, which is unfortunate because: (a) it’s how the game was meant to be played; and (b) it’s one of the more enjoyable multiplayer offerings on the Vita.

A sparse online community isn’t EDF 2017 Portable’s only issue. Enemy A.I. seemingly consists of one command: charge. And while that may make sense given your opponents, from a gaming perspective it means the only way to pressure the player is to overwhelm them with enemies and/or their projectiles. On top of that there are times when explosions and the like will cause the screen to shake (an effect that can be turned off). Now, on a 55-inch TV that’s just fine. On a five-inch Vita it’s a visual cluster… um, fudge.

Plus, for all the insane combat to be found there are also significant chunks of time spent moving from Point A to Point B to engage the enemy. Similarly there are levels in which fighting takes place on multiple fronts, which can lead to stragglers dotted around fairly sizable areas. Nothing like spending five minutes tackling 200 enemies and then the next three tracking down a half-dozen.

Perhaps the biggest issue of all, however, is the price point. Available in the U.S. exclusively as a digital download, EDF 2017 costs US$39.99 to purchase from the PlayStation Store. Despite plenty of good qualities there’s no denying that’s a lot to ask given this is a remake of a title that came out six years ago and cannot be resold once you’ve had your fill.

Cost aside, whatever shortcomings Earth Defense Force 2017 Portable has graphically, aurally and in the A.I. department, they don’t detract from the game enough to erode the amount of addictive fun just waiting to be had.

By Herija Green
This entry was posted on Thursday, February 28th, 2013 at 11:11 am and is filed under Herija Green, Video Game Reviews. You can follow any responses to this entry through the RSS 2.0 feed. Both comments and pings are currently closed.