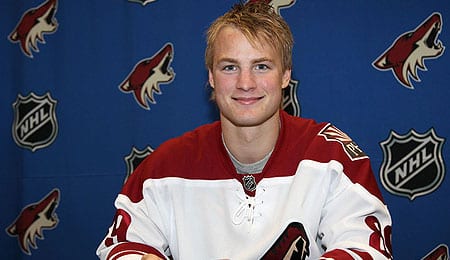 Mikkel Boedker could be the Coyotes’ top gun by season’s end.

The 2012-13 NHL season finally will get started Saturday. This year we kick off the 2012-13 RotoRob NHL Draft Kit with a list of everyone’s favourites — sleepers!

There does come a time when the sleepers rule the roost and surprise everyone. Now we make no guarantees that all of the players listed below will shock and awe, but at the very least, they may just break out. We are going to count to 10 and see if these “recruits” will help lead your Fantasy team to glory. If not, you can laugh at us later plenty, but more times than not we get these right.

Let us take a peek into the “crystal ball,” which was cut due to budget, and try to find some solid sleepers for everyone to keep an eye on in the 2012-13 NHL season.

1. Mikkel Boedker, LW, Phoenix Coyotes: While many believe that Boedker’s teammate Oliver Ekman-Larsson is the Phoenix sleeper, we see his breakout coming from a mile away. The thing is Phoenix demands solid two-way play and Dave Tippettis an own zone type of coach. Boedker had to earn the respect to gain the prime scoring role that Ray Whitney once occupied. Yes, Radim Vrbata may be the go-to guy to start, but do not be surprised if Boedker takes over at some juncture. In a shortened season, you need players that are ready to strike early. Boedker is that guy.

2. Vladimir Tarasenko, RW, St. Louis Blues: Tarasenko just has that breakout look and you know that he is well rested after playing only 13-to-15 minutes a night with SKA of the KHL. Who did he play with? Tarasenko was paired with Ilya Kovalchuk from time to time and the chemistry was undeniable. Just 20, Tarasenko has considerable upside. How much of that upside he taps into this season will depend on who the talented forward plays with, but a top six role is very likely which means a nice jump in points and a potential for a second half surge. Fantasy owners want to keep an eye on when Tarasenko goes in your draft because next season the story will be much different.

3. Roman Josi, D, Nashville Predators: Why is Josi so high on this list? Simple… the kid has the poise and talent to play with a dude as awesome as Shea Weber and that is key. Second, Josi is actually getting to play with Weber and that means an automatic boost in points. In some ways, Josi could be the next Ryan Suter if all breaks right. Even in the shortened season, Josi has 30-point potential and could score as many as 10-to-12 goal. Don’t be shocked at the upward mobility on this player who may be a waiver pickup just waiting for the taking.

4. Sven Baertschi, LW, Calgary Flames: Baertschi’s performance in that late season call-up was just a taste of things to come. The Flames tend to draft some of these “gems” only for them to burn out before they ever fade away. However, Baertschi looks like he will see some top six time before long because he does have natural NHL talent. His wizardry on the power play could be tapped this season if he sees enough ice time. Basically the future in Calgary could potentially be this dude, so it will be interesting to see what he does with a little pressure on him.

5. Chad LaRose, LW/RW, Carolina Hurricanes: There is a saying that some of these hockey players are just really late bloomers. It seems 30 was the right age for LaRose to break out with a 19-goal, 32-point season and, hey, he really shifted around from line combination to line combination. He will be in the top six mix this season and with high shot totals and more time on the man advantage, LaRose could be a huge beneficiary of the increased talent. For instance, Alex Semin and Jordan Staal could be LaRose’s linemates at some point. Here we go!

6. Justin Faulk, D, Carolina Hurricanes: It feels like a run on Carolina players but Faulk had a chance to get a taste of some top defenseman time last season and first unit man advantage time. This season he will have a little more talent around him to showcase his skill set. Faulk could play 23-to-25 minutes a night and that means potential for more points. He will be overlooked in drafts but we will not forget him here.

7. Cam Atkinson, LW/RW, Columbus Blue Jackets: Hey! Someone has to do something positive in Columbus, right? Atkinson, a Boston College product, excelled late in the season for the Jackets, notching 10 points in his final six games. Yes, he is about 170 pounds soaking wet and is a diminutive 5’7″, but he has elite hands. Who will Atkinson play with is the question. However, his power play acumen should be enough to surprise many in this shortened campaign. It will almost feel like a college season.

8. Jonathan Huberdeau, C, Florida Pathers: Health is essential for Huberdeau and after the performance he had in the 2013 World Junior Championship it’s clear this is a true wildcard with offensive upside that belies his age. Again the shortened season is going to springboard some players into very unexpected results. It happened in 1995 and will happen again in 2013. Make sure you see who Huberdeau plays with first but here is a player who is ready for the NHL and Florida has several of these guys. You have been warned.

9. Roman Cervenka, C, Calgary Flames: Cervenka and Baertschi could be a pretty formidable duo for years to come. Yes, Cervenka is a 26-year-old rookie, but his KHL skills can not be taken for granted. It was not just the 100 points in 105 career games, but his on ice presence was more than noteworthy. These are the players that often thrive straight from Europe, and Calgary may have struck gold again. Cervenka may even centre the top line at some juncture.

10. Jacob Josefson, C, New Jersey Devils: We have the distinct feeling that Josefson could surprise or spectacularly fail. Either way, sometimes we have to go in a completely different direction with our picks. While Josefson has finally stayed healthy, he has also managed to start producing offensively which is something New Jersey will desperately need with the loss of Zach Parise. It may be time for Josefson to take that next step.

It is going to be a strange and different Fantasy season for most since owners have never played in a format quite like this, unless they have done Fantasy minor leagues or leagues abroad. Either way, 48 games in 99 days means fast, fast, fast. Keep up with the pace and adapt. That is the key.

By Chris Wassel
Tags: Mikkel Boedker
This entry was posted on Sunday, January 13th, 2013 at 3:45 pm and is filed under 2013 RotoRob NHL Draft Kit, Chris Wassel, HOCKEY, Sleepers. You can follow any responses to this entry through the RSS 2.0 feed. Both comments and pings are currently closed.