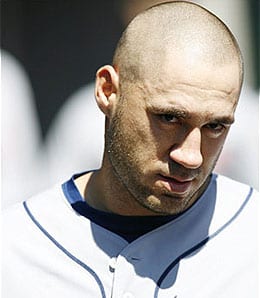 Let’s face it: Travis Hafner’s career has been in free fall mode for about three years now. When he returned from his latest injury in mid-September, we were a tad sceptical about his ability to help your Fantasy team. Sure enough, he went 0-for-13 for the rest of the month, playing sporadically and contributing even less often. Pronk did manage to get two hits in five October at-bats, but big whoop.

He stayed healthy early and his production followed (.295 with 10 RBI in April), but he slumped in May and was even worse in June.

The injuries began in late May when Hafner fouled a ball off his right knee, requiring a cortisone shot and earning him a DL stint. The knee required arthroscopic surgery a few days later, knocking him out of action until early July.

Hafner struggled when he came off the DL, and even his normally high walk rate dipped, although he picked things up a bit towards the later part of July.

At the start of August, Hafner was put on the paternity list because apparently he hadn’t missed enough time. Three days later, he returned to the Indians after the birth of his second son, however, he hurt his back in BP and had to skip an extra game.

Hafner returned the next night, but then the back acted up again, requiring an MRI and ultimately another DL stint. As of mid-August, it looked like he was done for the season because of a bulging disc. Thankfully, Hafner avoided surgery and about six weeks later, he was activated.

Even though he spent most of his time batting cleanup, this dude’s Fantasy value had been reduced to extremely deep AL-only leagues.

So let’s recap. We’re talking about a 35-year former slugger whose career had been decimated by injuries and was again limited to around two-fifths of a season in 2012 because of a variety of ailments. He’s only averaged 86 games played over the past five years. Yuck.

His bat is waning; in a 11-year career, he’s still trying to reach double-digits in steals – for his career; and his ability to work the count is also in decline. Oh, did we mention he doesn’t qualify anywhere defensively?

A flyball hitter, Hafner’s HR/FB rate was actually better last year and his 20 extra-base hits in just 66 games gave him his best isolated power since 2006, so that’s definitely a promising sign.

After the season, Cleveland – not surprisingly – declined its 2013 option on Hafner, giving him $2.75 million to go away and making the DH a free agent. Constant health worries are going to scare off most teams, but it’s not impossible that the Indians decide to bring him back at a reduced rate. It’s just that right now, they have other priorities to deal with. The Astros were apparently looking at him about a month ago as they needed a DH with the move to the AL, but they opted instead for Carlos Pena.

There are supposedly other AL teams interested in Hafner, but no one seems to know who exactly they are, so that seems like one of those agent-fuelled rumours.

At this point, he’s essentially a DH that cannot be used against lefties (he hit under .200 against them last year). If he stays healthy – um, ya – he’ll be a useful Fantasy asset. With a full season of at-bats, Pronk could make a run at 20 dingers and 90 RBI – so you can’t completely overlook or ignore his power potential.

At that rate, Hafner is simply not draftable, so it’s no surprise that he’s not getting picked in any mock drafts. Mock draft expert and RotoRob Baseball Editor Tim McLeod says that “the odds are better that Hafner shows up in next Shrek movie.”

Tim does not lie: Hafner vs. Shrek. You be the judge.

By RotoRob
This entry was posted on Wednesday, January 2nd, 2013 at 12:54 pm and is filed under BASEBALL, Player profile, RotoRob. You can follow any responses to this entry through the RSS 2.0 feed. Both comments and pings are currently closed.