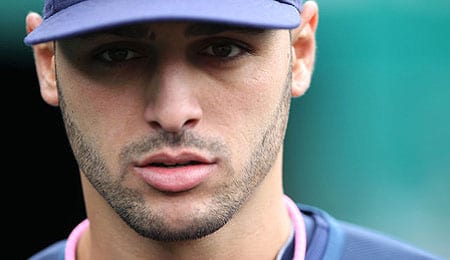 Sean Rodriguez remains useful because of his defensive flexibility.

Heading into the 2012 season, we expected Tampa Bay Rays infielder Sean Rodriguez to have to some AL-only value based on being a super sub and qualifying at so many positions. To wit, we ranked him 24th in our Second Base rankings, 28th in our Shortstop Rankings and 32nd in our Third Base Rankings.

So how did that all play out?

Not well. After starting 2012 as the Opening Day shortstop (by beating out Reid Brignac and Elliot Johnson for the job), Rodriguez struggled out of the gate before turning it on in May.

Unfortunately, that was as good as it got, and he suffered through a season in which he was demoted and then busted a hand punching a locker at Triple-A. When the dust settled, he didn’t even stack up as a top 50 second baseman or shortstop and wasn’t even a top 60 third baseman. On the plus side, he’ll qualify at all three positions again this year, so at least he’s got that going for him. Of course, thanks to Evan Longoria’s injury, Rodriguez saw a lot more time at the hot corner than anticipated.

Rodriguez struck out more often than usual – which was plenty to begin with – and after back-to-back double-digit steal seasons, he only swiped five bags (on just five tries, too; what up with that?). That, combined with less power and a weaker BA limited him to use only in deeper AL-only leagues.

Rodriguez flashed talent with the Angels, but since he’s come to Tampa, he’s regressed every season. And now, given that he’s 27, it’s fair to wonder if there is any upside left in his game.

This is a flyball hitter that’s had a low number of his flyballs leave the park the past couple of seasons. All told, there’s no doubt Rodriguez performed below expectations and it helped underscore the Rays’ need for more offensive production.

Rodriguez’s BABIP has been pretty low the past couple of seasons, so there’s reason to believe he’s capable of doing a bit better in that department, but it’s not as if he’ll ever be a .300 hitter (his lifetime BA is just .225).

The utility man was eligible for arbitration this offseason, but the Rays didn’t flinch, agreeing with him on a one-year, $1-million deal. Unfortunately, it’s hard to envision Rodriguez as more than a part-time player given his struggles against righties (.205/.230/.345 last year). Then again, his 655 OPS against southpaws wasn’t exactly awe-inspiring either.

As long as he’s supplying modest power and speed, you’re willing to suck up that awful BA because of the great positional flexibility S-Rod offers. But if that eligibility is all he brings to the table, it’s a tougher sell. It’s hard to imagine Rodriguez being worse than he was last year, when he was one of the most awful offensive players in the majors (considering how much PT he got).

Looking forward, Rodriguez will likely get a bit more PT this year (assuming he’s healthy and sticks in majors) and we’re expecting him to flirt with double-digit power and speed with a crappy BA. One interesting possibility is that he’ll see time in the outfield again now that B.J. Upton is gone, and if Rodriguez can qualify there as well, he’ll be even more useful for Fantasy purposes. Remember that he played a couple of games in the outfield in 2011 and appeared in enough games to qualify there in 2010.

Because of the lack of options at second base and shortstop, Rodriguez is showing up in mock drafts as a late-round option. We’re talking about an ADP higher than 385, though.

By RotoRob
This entry was posted on Thursday, January 3rd, 2013 at 1:43 pm and is filed under BASEBALL, Player profile, RotoRob. You can follow any responses to this entry through the RSS 2.0 feed. Both comments and pings are currently closed.