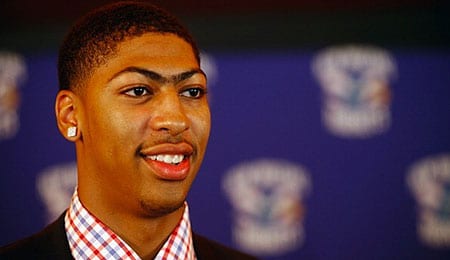 Anthony Davis and his unibrow are ready to take the NBA by storm.

The 2012-13 RotoRob NBA Draft Kit continues today with a look at the incoming freshmen class. So while you wonder how honest Chris Paul was being when he said he wanted to go to the Clippers rather than the Lakers, let’s take a look at the Top 10 Rookies in Fantasy basketball this season.

1. Anthony Davis, PF, New Orleans Hornets: After being drafted first overall in this year’s draft, Davis played in the London Olympics with gold medalist Team USA. Already set to enter the league as an elite interior defender, he was able to play alongside reigning Defensive Player of the Year Tyson Chandler as well as Kobe Bryant and LeBron James at the Olympics. Davis has great athleticism and leaping ability that gives him the strength to finish under the bucket with other bigs on top of him. He can provide value as a starter for the Hornets and possibly lead the team in rebounds this season, but he will need to improve his decent mid-ranged jump shot. We believe Davis’ on-court maturity will be greater than the average rookie, but he will face struggles at first until he settles into a groove at this professional level.

2. Michael Kidd-Gilchrist, SF, Charlotte Bobcats: MKG will bring an intense amount of energy and toughness to every game for the Bobcats and improve the all-around quality of the team. He may not have the best ball-handling skills or jump shot, but he will fit right into Mike Dunlap’s up-tempo offense as an explosive athlete. Bound to be one of the best young defenders this season, MKG should have solid steal and block numbers, and has the ability to put up 20 points every now and then with more minutes as a starting forward.

4. Harrison Barnes, SF, Golden State Warriors: With this draft pick, the Warriors acquired a more skilled Dorrell Wright. As long as Stephen Curry and Andrew Bogut stay healthy then Barnes is a perfect fit for big opportunities with his ability to get open off the ball and knock down shots. Barnes needs to consistently hit his threes while being a productive scorer this season to help a newly rebuilt team that has a chance to make it to the postseason. Since the starting lineup is filled with veterans, Barnes can focus more on the defensive side of things and not be forced to take on the role of leading scorer. He has the capability to become one of the game’s best mid-range shooters.

5. Dion Waiters, SG, Cleveland Cavaliers: Waiters is now part of one of the NBA’s most exciting backcourt-duos with Kyrie Irving. Waiters is going to have more of a role like Dwyane Wade has with the Heat. Waiters will be outstanding off the dribble and can attack the basket well, but his jump shot is far from consistent. Waiters should put up nice scoring and assist numbers this season because of his ability to get out in transition with Irving.

6. Damian Lillard, PG, Portland Trail Blazers: With his performance in the summer league — averaging 26.5 points, 5.3 assists, and 4.0 rebounds per game – Lillard became a fan favourite and jumped out as a top rookie. Portland drafted him to be its starting point guard, so he will get plenty of chances, and playing the pick-and-roll with LaMarcus Aldridge will help increase Lillard’s point and assist totals. Statistically, he can have a season similar to what Kyrie Irving did a year ago. Lillard has a deadly outside shot, and his speed and quickness allow him to blow by defenders and finish at the rim. He had a bit of a high turnover rate in Summer League at 3.8 per game, but he showed improvement in that area in his final season at Weber State, so we expect that to improve as the season begins. Lillard should be a great help for the Trail Blazers.

7. Bradley Beal, SG, Washington Wizards: Touted as the second coming of Ray Allen, Beal has star potential alongside John Wall and a new supporting cast of Nene, Emeka Okafor and Trevor Ariza. The Wizards have been in need of a spot-up shooter who can drive-and-dish with Wall. Beal has impeccable form and a range without limits. He is also great off the dribble and an elite rebounder for his position. He will provide a perimeter threat for the Wizards and if his three-point percentage begins to dip, then he can always attack the basket or score from the line.

8. Andre Drummond, C, Detroit Pistons: Drummond has drawn comparisons to Dwight Howard, but it will take a lot of seasoning and hard work to fulfill those expectations. However, playing next to Greg Monroe, should provide a good start to Drummond’s promising career and in time could help give Detroit a real impressive frontcourt duo. While Monroe has become the face of the Pistons for his well-honed offensive skills, he is a more passive defender, and this is where Drummond will get his opportunities. A surplus of defensive plays creates chances for him to crash the glass and make a name for himself as a force in the paint.

9. Jeremy Lamb, SG, Houston Rockets: Lamb should see plenty of minutes and action as Houston begins the rebuilding process. Although Kevin Martin is still around, don’t be surprised if he is traded or misses some time due to injury this season. If Martin is shipped out, Lamb will get a chance to start and show off his shooting touch and athleticism. In five summer league games, Lamb averaged 20 points and 4.4 rebounds. He struggled from three-point range but coming off screens and spotting for open threes will be his specialty in the NBA.

10. Perry Jones III, SF, Oklahoma City Thunder: With the No. 28 pick in the draft, the Thunder snagged Jones, who was ranked as a the top 10 pick in the 2011 NBA draft, and many believe that the Western Conference champs have gotten even better. He has great athleticism and averaged 12 points and 6 rebounds in two summer league games. Jones has a long way to go before living up to the hype, but he has shown flashes of greatness this summer and is a great addition to an already skilled roster.

By Daniel Olson
This entry was posted on Thursday, September 20th, 2012 at 12:09 pm and is filed under 2012-13 RotoRob NBA Draft Kit, BASKETBALL, Cheat sheets, Daniel Olson, Rookies. You can follow any responses to this entry through the RSS 2.0 feed. Both comments and pings are currently closed.