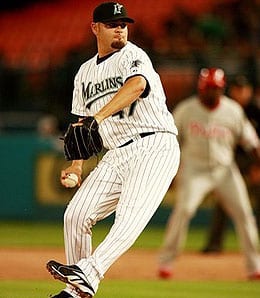 Will Ricky Nolasco be the next one to get shipped out of Miami?

For those of you who tuned in halfway through this week’s episode of RotoRob’s Fantasy Baseball Weekly (heard every Thursday at 9 p.m. EST on Blogtalkradio), you might have been surprised to hear just two of us talking Fantasy baseball. A new job has taken Buck Davidson out of the equation, but as we mentioned in the show, we want to thank him very much for all his work and efforts in getting this show off the ground and wish him well in his new gig.

That leaves just Tim and RotoRob for now (but watch for the occasional special guest) to go over the news, which this week included a look at:

As always, to hear the show in full, all you need to do is click that pointy thing below. Yes, spiritual enlightenment is that easy to attain.

By RotoRob
This entry was posted on Friday, November 23rd, 2012 at 10:22 am and is filed under BASEBALL, Podcast, RotoRob, RotoRob's Fantasy Baseball Weekly, Tim McLeod. You can follow any responses to this entry through the RSS 2.0 feed. Both comments and pings are currently closed.