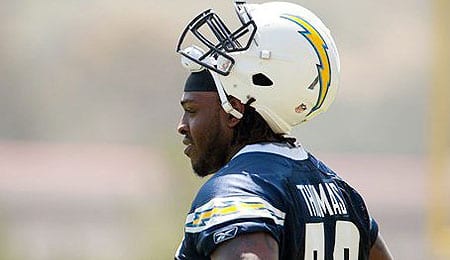 It’s hard to believe the San Diego Chargers got off to a 2-0 start and were still sitting pretty at 3-1 a quarter of the way through the season given what’s happened since.

The team proceeded to drop seven of its next eight before righting the ship with a shocking 34-24 win in Pittsburgh on Sunday.

That moved the Bolts to 5-8 as they continue a free fall that started after that brilliant 13-3 season in 2009. The following year, San Diego went 9-7, dropping to 8-8 last year and needing to run the table in its final four games this year just to reach .500 again.

What in the hell has happened here?

In a nutshell, the offense has gone into the tank.

After finished sixth overall in total yards in 2011, the Chargers are 27th this season. The pass attack has plummeted from sixth to 19th, while the rushing has dropped from 16th to 27th. Ugh.

The offensive doldrums have overshadowed what has actually been a very promising season on D – mostly thanks to a massively improved run defense that has jumped from 20th in the NFL last year to fourth this year. It’s so good that despite a weaker pass defense, the Chargers are one of the league’s best defensive teams this year.

Of course, the Chargers’ pass rush hasn’t been overwhelming the past couple of seasons, but it sure looked good Sunday against Ben Roethlisberger in his return to action. The Bolts only sacked Big Ben once, but were all over him all day, forcing 20 incompletions.

Cam Thomas was a huge part of that with a breakout game. He rushed 21 times and came up with five QB hurries and a hit. Thomas was also instrumental in disrupting the Steeler offense on Roethlisberger’s only pick of the game.

San Diego built a whopping 27-3 lead in the third quarter, and even it couldn’t cough that up en route to the team’s first ever regular season win in Pittsburgh. Yes, in the midst of the Chargers’ worst season in many years, the team turns in a historic win. Oh, the irony.

Play out the string? That’s not the Charger way. This team loves to dig itself into deep holes and then rally to save Coach Norv Turner’s job for some reason. It’s not going to happen this year. Turner has already publicly conceded he’s going to be fired after the season, and GM A.J. Smith will get the boot as well. This team needs a fresh start as it heads toward a third straight season of missing the playoffs. Could a great finish and sneaking into the playoffs change things? Well, it wouldn’t be the first time.

On offense, wide receiver Danario Alexander continues to gain traction on the wire and why not? All he’s done is gain 100 yards or more or score at least one TD in four of the past five games. Sunday, Alexander was targeted 11 times and wound up pulling in a pair of TD passes, giving him five for the season. His 39-yard TD reception late in the second quarter helped make it 10-0 San Diego, putting it well on its way to an upset win.

Alexander is taking advantage of single coverage situations to enjoy a breakthrough season in his third year – always the key campaign for a receiver. He’s already achieved a new career best with 555 yards receiving and has also set new personal marks in touchdowns, first downs and longest play. This dude needs to be owned and he’s still massively available in most leagues.

With Alexander’s emergence, it is Malcolm Floyd that is suffering. He’s barely a decent third WR option these days considering he’s losing targets to Alexander. Floyd has started winding up on the wire of some shallower leagues and after his ugly 10-yard receiving day Sunday, we expect to see more of him on the wire.

Floyd has already played more games than last year, but is still 81 yards short of matching his output from 2011. He’s at least scoring, matching his TD total from last year (five), leaving him just one shy of matching his career best, but there’s no doubt this year has been a letdown after he showed signs of breaking out in 2011.

Tight end Dante Rosario has become a forgotten man in the San Diego offense. He hurt his quad Sunday, leaving him questionable for the next game, but was not targeted at all. Rosario hauled in all three of his TD catchers in Week Two, making him the only TE this season to record a three-TD game, but he’s been pretty much invisible since then, and there’s really no reason to own him unless you’re in some crazy ass huge league.

Of course, it’s not as though starting TE Antonio Gates has been lighting it up. He was targeted plenty on Sunday, but turned in another stinker with just 31 yards receiving. Gates is no longer a Fantasy stud as he’s gone steadily downhill since his career year in 2009. And even though TE remains a bleak landscape for Fantasy purposes, in some shallower leagues, Gates has started popping up on the wire. Sunday’s effort won’t stem that trend.

Quarterback Philip Rivers hurled three TD passes Sunday, his best showing since five weeks ago in Tampa Bay. It was certainly a decent bounce back effort after his stinker against the Bengals.

Still, you’ve got to be concerned with the fact that since his career year in 2008, Rivers has regressed consistently. He’s not throwing quite as many passes as last year when he had a career high 582 attempts, and his picks are down slightly. However, the turnovers continue to be a major issue as he’s already reached double-digit fumbles for the first time in his career, helping take his QB rating down to 85.5, his worst since 2007.

There’s a reason this team’s offense has crumbled and San Diego has massively underachieved this year as a result.

By RotoRob
This entry was posted on Wednesday, December 12th, 2012 at 1:30 pm and is filed under FOOTBALL, RotoRob, Team report. You can follow any responses to this entry through the RSS 2.0 feed. Both comments and pings are currently closed.