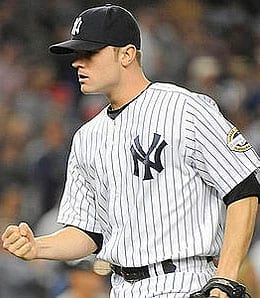 David Robertson is stoked about the idea of replacing Mariano Rivera.

Mariano Rivera has made a decision. He’s just not telling anyone what the hell it is.

Does this mean 2012 will be the final season for the greatest closer in history?

Or perhaps he’s decided he prefers Coke over Pepsi.

When Mo arrived at Spring Training, he said he’s made an “irrevocable” decision, but no one really knows what that means.

We can speculate, though.

Now 42, Rivera remains among the best in the business, so there’s no real reason for him to contemplate hanging ‘em up. But perhaps he’s just had enough.

Baseball’s all-time leader in saves after racking up another 44 of them last year (to go along with a sweet 1.91 ERA), Rivera is headed into his 18th season and the final year of a two-year, $30-million contract.

In keeper leagues, David Robertson just became a prime candidate to be extremely valuable in 2013 – assuming (a) Mo doesn’t change his mind (again, assuming he is actually planning to retire); and (b) the Yanks don’t go out next winter and land a big-name closer to replace Rivera.

Don’t forget to join Buck, Tim and I every Thursday at 11 p.m. EST as we analyze all the Fantasy baseball worthy news of the day. Tim’s going to be AWOL this week, but we may have a guest on to pinch hit for him. Will Tim be Pipped? This week, we’ll be providing more analysis on the third base position. You can tune in here.

By RotoRob
This entry was posted on Wednesday, February 22nd, 2012 at 3:59 pm and is filed under BASEBALL, MLB Today, RotoRob. You can follow any responses to this entry through the RSS 2.0 feed. You can leave a response, or trackback from your own site.