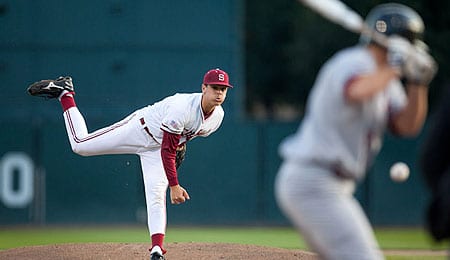 Opting to go to Stanford instead of turning pro has worked out for RHP A.J. Vanegas so far.

For several years now, we’ve been amazed that David Ortiz just keeps going and going and going, having long ago written him off as a Mo Vaughn who would have a short career peak and then quickly fade into obscurity because of injuries caused by his rotund body type.

Big Papi enjoyed a major bounce back season in 2010, was even better last year and was heading for one of his best years ever in 2012 before an Achilles’ injury decimated his second half.

The last time we checked in on his injury situation in a mid-August Podcast we joked that while he was under orders not to do any running at the time, you had to wonder if that changed anything given that it’s pretty rare footage to see the big man sprinting around the bases at the best of times.

After the season, the Red Sox re-signed Ortiz to a two-year, $26-million deal (with a chance to earn another $4 million in incentives) – a clear sign that they plan to retool and try to contend again as soon as possible.

The injury limited Ortiz to just 90 games – his lowest since 2001, when he was still with the Twins. Even so, he still piled up an impressive 65 runs – even more amazing when you consider that Boston was missing plenty of its big guns offensively last year. Ortiz was highly productive when he was healthy and enjoyed his best OBP since 2007. In fact, the burly DH was headed for his best overall season in five years before getting hurt. That 2007 season was Ortiz’s best in Boston, even though two years earlier he wound up finishing second in the MVP race for his highest placement ever.

Looking forward to 2013, the fact that he’s going to stay in Boston and not take his bat elsewhere is great news for both Ortiz and his Fantasy owners. This year, he put up a ridiculous 1169 OPS at Fenway – over 300 points better than what he managed on the road. He’s been a much better hitter in Boston for many years now, but it was more pronounced than usual in 2012.

Ortiz managed a WAR of 3.0 despite missing almost half the season and that has to tell you that even though he just turned 37 a couple of weeks ago, he still has plenty left to offer.

He’s been a long time leader in the Red Sox clubhouse – more so than you’d expect from a player that sits on his ass half the game – so bringing him back to the fold was an important move for Boston.

Sure, Bobby Valentine questioned Ortiz’s commitment to the team. But Bobby V. did a lot of douchy things before he got run out of town. Ortiz remains one of the most dangerous left-handed sticks in the game, and a player that other teams have to come up with a battle plan to beat.

It’s hard to believe that Big Papi so vastly outlived Manny Ramirez in Boston – and has remained as relevant as he has.

Working against him, obviously, is the fact that he failed to gain acceptance as an everyday player in Minny for several years, only truly coming into his own after joining the BoSox in 2003. That’s really hurt his ability to put up elite career numbers. And oh, there’s still that whole DH bias, which we believe is a pretty convincing argument working against offense-only dudes being Hall of Famers.

By RotoRob
This entry was posted on Thursday, November 29th, 2012 at 11:50 am and is filed under BASEBALL, Fantasy Notes, Player profile, RotoRob. You can follow any responses to this entry through the RSS 2.0 feed. Both comments and pings are currently closed.