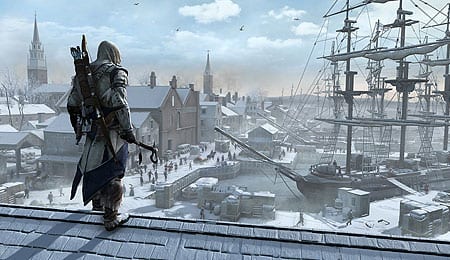 I remember clearly when the first trailer for Assassin’s Creed came out — Unkle’s song “Lonely Soul” rang out while an Altair montage played. I was hooked, and I’ve been a fan ever since. After the Ezio trilogy, Ubisoft’s signature franchise is finally taking another substantial leap forward in the timeline, going from renaissance Europe to colonial America. So, is Assassin’s Creed III a full blown revolution? Or does it settle for moderate improvement? Read on.

By now the AC setup should be instantly familiar to anyone that has played a previous installment. You toggle between a default set of face button actions and high profile with the right bumper, which allows you to free run and attack enemies. The left trigger summons your assassins while the right brings up the weapons and items wheels to choose your equipment. Combat is still timing based as you counter hapless foes with the usual assortment of sweet looking kills.

Everything runs smoothly on the control front… until the time comes to sprint with precision. It’s during the game’s chase sequences that its shortcomings being painfully obvious. There are few things more maddening than being on a target’s heels only to clamber up a wall or dive into a pile of hay because you get too close to it. The game is simply too finicky for its own good in this regard, and you’ll end up replaying these sections far more often than you should because of it.

Visually, the Assassin’s Creed series has long been at the cutting edge of console graphics with its exquisite attention to detail and incredibly fluid character movement. That is once again the case in Assassin’s Creed III as Ubisoft does a great job recreating 18th century America, whether it’s in the relatively bustling cities of Boston and New York or the expansive wilderness. As the game stretches over many years, you get to witness the seasons’ change, which is really well done. It’s easy to lose chunks of time just exploring and taking in all that the world has to offer.

Not everything is pristine in the Animus’ world, though, as there are incidents that will pull you out of the experience. Perhaps most damaging is when people that seem to be milling about in the distance literally vanish right in front of your eyes as you get closer. Also, on the camera side there are moments in battle when it’ll swing behind something and obscure your vision as you’re trying to counter. Yes, you can readjust, but it’s annoying to take unwarranted strikes from your enemies.

While not as impressive as the game’s eye candy, the vocal work is generally quite good, particularly during the early sections when you control Haytham Kenway. Given the reverence with which many of the figures found in AC III are treated historically in the United States, it seemed odd to hear them speak in such measured voices. It’s probably more accurate that way, but I felt like they should’ve had a more commanding manner of speaking.

Ostensibly, Assassin’s Creed has always been the story of Desmond Miles, a descendant of the order of assassins tasked with entering the Animus to unravel modern mysteries by reliving the adventures of his more interesting ancestors. That overarching storyline ties all five titles together with Miles’ quest to prevent a cataclysmic event winding down. It always felt like filler to me with a hard-to-follow narrative that is purposely vague when it comes to providing answers. That being said, Assassin’s Creed III does its best to wrap things up neatly — and the Desmond sections are actually fun this time.

As with the other titles, the real action takes place inside of the Animus. This time we’re introduced to Ratonhnhaké:ton, a half-English, half-Mohawk that is quickly dubbed Connor by his mentor. His story takes place during the time of the Revolutionary War, though it thankfully steers clear of any cut-and-dried clichés where the British are terrible and the colonists are beyond reproach. There is immoral behaviour on both sides of the conflict, and while you’ll usually side with George Washington and company it isn’t exactly the patriotic tale you might expect (especially based on the TV commercials).

One of the more interesting things about AC III is that it goes for the slow burn. As mentioned earlier, you actually begin the game controlling Haytham Kenway, who after a brief opening sequence takes a lengthy trip across the sea to reach the colonies. Once there you’ll locate several men to serve as your lieutenants as you carry out your orders. It’s a unique approach, and one that could try some gamers’ patience as the early sections are highly structured and deliberately paced.

Ultimately you should expect to spend three hours or more playing through Kenway’s section, and it’ll be another good bit before you finally get to control an adult Connor. Yes, the game is introducing you to all its new gameplay mechanics and available side quests, but clearly the developers want you to invest in these characters. I’m always big on story, and therefore I enjoyed the game’s deliberate build. However, I’m sure some will be chomping at the bit by some gamers long before they’re truly set free to explore and advance at their own pace.

Oh, but once it does open up, there is an incredible amount of area to explore and seemingly innumerable things to do. For sheer mileage we’re talking two vast wilderness areas along with the cities of New York and Boston. Walking the streets, you can collect almanac pages blowing in the wind, take part in a series of liberation missions to free the city from Templar control, deliver messages, search for treasure and much more. There’s even a set of naval quests to tackle.

Transition into the wild and there’s even more to do with homestead missions (which grow the number of people living on your land), feathers to collect and roaming squads of redcoats to waylay. A Red Dead Redemption-inspired hunting option has also been added. Here you can stalk your prey with cleaner kills netting you more usable items. Pelts and other spoils can then be sold to buy or upgrade weapons and items. If you get into the hunting aspect you can lose track of time trying to locate all the animal types across numerous hunting grounds.

As loaded as Assassin’s Creed III is with content it is not without its drawbacks. Combat remains a simple affair, and short of being completely overwhelmed by enemies it is hard to lose a fight. There are also some missions that frustratingly require you to chase down targets, one in particular that had me cursing as I could not cut down the distance between me and my mark, and once I realized he was running in an endless circle I got even madder. Without question I was desynchronized more times from environmental falls and escaped targets than actual lost battles. Still, even if the campaign isn’t always smooth, it does a lot more right than wrong.

I’ve been pleasantly surprised by Ubisoft’s ability to turn the core gameplay of Assassin’s Creed into a viable multiplayer experience, and I’m happy to report that AC III surpasses its predecessors. Many of the rough edges have been smoothed out since last time, and the “cat and mouse” aspect of the free-for-all game sessions makes for something wholly different than most online offerings.

Essentially, you have a mark that you’re trying to find and execute, but as you’re doing that someone is hunting you — and often times multiple people will be on a single contract. The sound of whispers signifies your would-be killer is near, and it never fails to heighten your awareness. Points are earned offensively by the professional nature of your kill (discretion is critical to scoring bonuses) while on the defensive you can stun your stalker or at least get an honorable death — that happens when you both go for the strike at the same time.

For those that prefer to work together, the new Wolf Pack mode allows human players to team up and execute A.I. targets. It’s pretty fun, but it can’t match the free-for-all’s sense of constant engagement when your next kill (or death) could be coming at any moment.

Assassin’s Creed III has a fantastic setting, an interesting story and a really strong multiplayer component. If you can embrace the slow build up to Connor reaching adulthood, this will easily keep you entertained for dozens of hours.

By Herija Green
This entry was posted on Wednesday, November 28th, 2012 at 10:14 am and is filed under Herija Green, Video Game Reviews. You can follow any responses to this entry through the RSS 2.0 feed. Both comments and pings are currently closed.