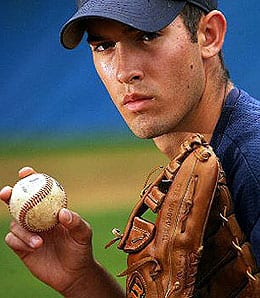 The last time we checked in on Detroit Tigers starting pitcher Rick Porcello back in early May we talked about how he was in the embryonic stages of a fine season.

Well, it’s time to look back and see how that played out.

May proved to be a solid month for Porcello, but he really took off in June, going 3-1 with a 3.00 ERA. Unfortunately, the rest of the season was a struggle. July saw his K rate plummet and his ERA soar. In August, he worked more innings with better results, but September was ugly. Thankfully, he finished on a strong note in his sole October start.

Porcello was most effective early, slowly fading as his pitch count rose and really getting ugly after around 60 pitches.

Looking at his season overall, Porcello made very modest gains for the second straight season. But we’re talking real baby steps here. He shaved 0.16 runs off his ERA from 2011 after trimming 0.17 the season before. At this rate, he’ll be a sub-4.00 pitcher by the time he’s around 27.

Porcello’s record has flipped-flopped between 14-9 and 10-12 in all four of his seasons and this being an even year, it was time for the latter record. Not great, but it’s still double digit wins four times in four tries, which is pretty impressive for such a young pitcher. He doesn’t turn 24 until next month, yet is already within two victories of the 50 mark for his career.

Of course, if Porcello hadn’t struggled between early August and his final start of the season in October – an 0-6 mark over eight starts – he might have actually enjoyed a winning record for a second straight season. That win on October 1 was pretty important, however, as it officially put the Tigers back in the postseason on their way to becoming AL Champions.

Bear in mind that Porcello was just 20 years old when he first became a staple in the Tigers’ rotation, and no – it hasn’t always been a smooth ride since – but generally the progress has been steady, if slow.

The real concern with Porcello is that even as his ERA has crept downward, his WHIP keeps rising – every season, in fact. He had to work harder to get through innings this season and his BAA – which also keeps heading in the wrong direction – soared to an unacceptable .310. The slugging against continues to head north as well.

There was talk he’d be left off the Tigers’ playoff roster, but he did sneak onto it, albeit in a relief role, tossing 1 1/3 innings of perfect ball.

One of the keys for Porcello taking the next step into greater fantasy relevance is consolidating his arsenal of pitches. He continues to tinker with a slider that has not overwhelmed any opponents. It wasn’t a bad pitch for him last year, but this year? Uh, not so much.

His fastball velocity was up, and Porcello went to that pitch more often, reducing the use of his slider (which also had a higher velocity). His changeup and curveball also clocked in at higher speeds, and both became more important offerings for him. If Porcello mixes in that change more often and reduces his slider, better results should follow.

We like the fact that his walk rate was down slightly this season, but it’s a damn good thing he upped his groundball rate, because a higher percentage of his flyballs soared out of the park – and that could have produced disastrous results.

His SIERA and FIP both indicate that better numbers are possible from Porcello. That’s something to keep in mind in keeper leagues.

The one thing that has struck us is how community-minded Porcello is. The New Jersey native was very active in relief efforts in the wake of Hurricane Sandy. Hell, even when he agreed to part with his number 48 after the Tigers signed Torii Hunter and Hunter offered to pay him handsomely for the number, Porcello said he’d rather Hunter use that money to help recovery efforts in Joisey.

Looking forward to 2013, we again expect a modest decrease in his ERA, probably to around 4.50. It’s a useful number in AL-only formats, but will have to be employed judiciously in any mixed leagues.

Crave more in-depth Fantasy analysis? Then join us every Thursday at 9 p.m. EST for RotoRob’s Fantasy Baseball Weekly Podcast on Blogtalkradio. Tim McLeod and I will entertain and edify you for an hour each week. Tune in here.

By RotoRob
This entry was posted on Thursday, November 22nd, 2012 at 12:59 pm and is filed under BASEBALL, Player profile, RotoRob. You can follow any responses to this entry through the RSS 2.0 feed. Both comments and pings are currently closed.