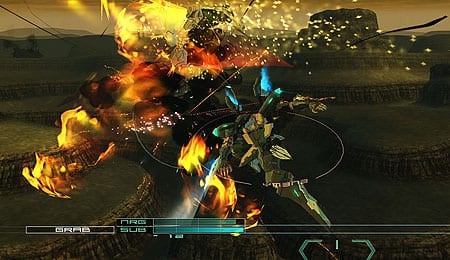 Get ready for crazy mech fighting and bad voice acting.

There’s one word to characterize the Zone Of The Enders HD Collection and that’s anime. From its anime-inspired fighting mechs to its anime-inspired plots – particularly the first game’s “Teenage boy stumbles into giant mech’s cockpit” storyline – to its anime-quality voice acting and cut scenes, both Zone Of The Enders and Zone Of The Enders: The Second Runner are inspired by and pay tribute to the industry that gave us wide-eyed boys and high-school girls fighting all kinds of sci-fi evil. While not all aspects of the collection hold up, it’s still a ton of fun, particularly if you’re like me and grew up thinking giant robots with lasers were the coolest things next to light sabers.

Both Zone Of The Enders games present a fairly simplified control scheme despite the fact that your giant robot is constantly moving in both horizontal and vertical planes. The left analog is for general movement while the right analog maneuvers a fine-tuned targeting reticle. Face buttons present primary and secondary fire options, along with burst (charged energy) attack and grabs. Yes, grabs — if you’ve ever wanted to grab a giant robot and throw it into a building, you’re in luck. The face buttons also control altitude, which can feel counter-intuitive at first, but becomes natural after a few combat sequences. In addition, speed bursts and shields are assigned to the trigger buttons.

Given all of the different controls, there probably is a way to create a more refined solution — using the face button to fire does feel a little outdated but it’s not something that necessarily brings the game down as long as you give yourself time to adjust. Fortunately, the first game presents a bit of a ramp-up learning curve to get used to this, along with an interactive (and somewhat redundant) tutorial. The second game, though, is a little more feet-to-the-fire in its approach, at least in terms of difficulty.

Considering these are dated PS2 games, both Zone Of The Enders titles hold up surprisingly well from a visual perspective. Much of this stems from the strong mech design, which is a part stylish and part industrial. In short, they make you feel pretty bad-ass, and the effects of firing, flying, and speed bursts ensure that there’s almost always something going on to distract you from repetitive backgrounds or questionable explosion effects.

Cut scenes are handled differently between the two games. For the first title, pseudo-anime 3D models are modeled for cut scenes, though they’re not real-time. These surprisingly low-tech models look dated even for being a PS2-era launch title, so much so that the characters aren’t that much of a step up from the original Playstation’s Final Fantasy 7. The sequel, however, does it right by employing actual animated cut scenes to flow in between sequences. There’s a noticeable resolution drop in these cut scenes, as I believe Konami has simply upconverted the original movie files.

If you’ve watched anime since the industry’s western explosion in the past 15 years or so, you’ll know that its voice acting has a checkered history. Both Zone Of The Enders games follow this tradition with uneven quality in both script and acting. This doesn’t really break the mood, though, since it’s par for the course.

Taken in snapshots, Zone Of The Enders is great fun. I mean, you’re piloting a freakin’ mech, flying through corridors and over cities while firing off lasers and missiles. It’s hard to really argue with that, particularly when the controls are crisp and responsive.

The problem is that all of this can get repetitive after a while. The first game presents an overland map with locations for enemy encounters; it’s not functionally much different from picking a stage for a Tekken or Street Fighter battle. Yes, there’s a story that ties it together, and there are variations in environment and secondary goals (such as minimizing destruction to save people) but ultimately it’s a lot of the same. Your mech evolves over time with extra secondary weapons and XP but it doesn’t really do a lot to vary gameplay.

The second game ditches this overland map for a more linear approach. While there’s some exploration and movement, in many cases it feels like a linear shuffle down corridors until a new “match” occurs with a set of enemies. This feels different from traversing across a landscape into an enemy encounter in Call Of Duty or Uncharted; perhaps it’s the stat-based rating you get following the fight, but it almost feels like the time-honored Japanese RPG tradition of random encounters.

From that perspective, Zone Of The Enders almost feels like the Japanese answer to action RPGs. There’s very light RPG elements (basic leveling and customization, match-based combat) combined with high-flying mech ass-kicking. Layer a very thick anime-inspired/derived story and you get a very unique perspective that’s fun but repetitive in a way that Final Fantasy 13 was.

Both Zone Of The Enders games hold up well some years on, and a big part of that is because there’s not much out there like it. However, the inherent flaws from the series’ initial designs remain, making this a good-not-great collection that will really appeal to anime fans.

By Mike Chen
This entry was posted on Monday, November 12th, 2012 at 10:21 am and is filed under Mike Chen, Video Game Reviews. You can follow any responses to this entry through the RSS 2.0 feed. Both comments and pings are currently closed.