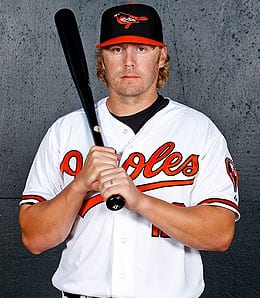 Mark Reynolds had a power drought most of the year.

While Mark Reynolds’ prodigious power will always find a home on a big league and most Fantasy rosters, his shortcomings – namely, defense (at third base at least), batting average and making contact – render him a tough pill to swallow at times.

So it came as no surprise at the end of October when the Orioles declined their $11 million 2013 option on Reynolds.

Oh, no one’s crying for Reynolds as he was given a $500,000 buyout, but let’s take a few moments and look at what he did this season and where he might be headed in 2013.

For Fantasy purposes, one of the most important considerations when assessing Reynolds’ 2013 value is that he will only qualify at first base. Had he played just five more games at the hot corner, his value would have been much higher.

It is clear that whatever magic he had in Arizona has not followed him to the American League. In his final two seasons in the desert, this dude smoked 76 homers with 187 RBI while swiping 31 bags and batting .231. In two seasons in Baltimore, he has 60 homers (including a very disappointing 23 this year) and 155 RBI. He’s only stolen seven bases and his BA has dipped to .221.

The good news: Reynolds avoided 200 strikeouts in 2012. The bad news: the main reason why he missed that ugly mark was because he lost several weeks of the campaign to an oblique injury. In fairness, his strikeout rate was down slightly, but that’s like trying to notice a three-pound loss in a 328-pound man.

It was really a tale of two seasons for Reynolds as he struggled most of the year (especially the first two months with just two homers heading into June) and then went crazy, smacking 15 homers in August and September to salvage his season.

Obviously, the injury severely affected Reynolds’ counting stats, but the fact that his isolated power plummeted to career worst levels – even with his late power surge – was a concern.

On the plus side, his walk rate bounced back, allowing him to post an OBP better than usual for him. Hey, it’s something positive.

Believe it or not, Reynolds’ WAR was actually up a tad over 2011, but given that he’s put a combined 0.8 WAR in two seasons as an Oriole after combining for 5.8 in his final two seasons in Arizona speaks volumes.

If he would simply shorten his batting stride, it could make a big difference to his numbers. But so far, no one has been able to get Reynolds to do that.

The power is still a huge factor here and given that he’s just 29, we don’t see that disappearing rapidly. If you choose to pitch to the Reynolds at the wrong time, he can make you pay. So at the very least, Reynolds will always have a place on a deeper mixed league team in Fantasy leagues.

As for his 2013 home, Reynolds has expressed an interest in staying in B-More, and that could still happen – but obviously at a cheaper price than his option. He has a year of arbitration eligibility left, so the Orioles could still choose to tender him a contract and hope that it winds up through arbitration being cheaper than what he was scheduled to receive. Or, Baltimore could simply non-tender him and send him to free agency. The O’s could still try to re-sign him under that scenario, but then of course they would be competing against other teams, which would likely up the price.

He’s proved he can actually play well at first base and the position is headed for a lean year from a free agent market standpoint (especially if Adam LaRoche re-signs with the Nats as he is expected to), so keeping Reynolds may be Baltimore’s top option.

If Reynolds is allowed to leave, Baltimore may turn to prospect Joe Mahoney, but given that his numbers slipped significantly in his first taste of Triple-A, we’re not sure the 25-year-old is the answer.

By RotoRob
This entry was posted on Wednesday, November 7th, 2012 at 10:32 am and is filed under BASEBALL, Player profile, RotoRob. You can follow any responses to this entry through the RSS 2.0 feed. Responses are currently closed, but you can trackback from your own site.