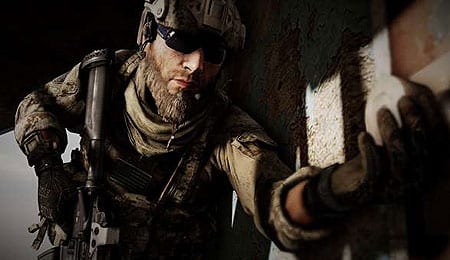 Come with me if you want to live.

Back in 2002, Vince Zampella and Jason West departed 2015, Inc., the developer of Medal of Honor: Allied Assault — still the second-highest rated installment in the long running series — to form Infinity Ward. The following year they partnered with Activision to release a little game called Call of Duty. A decade later, the Medal of Honor franchise still hasn’t recovered, left to play second fiddle to Battlefield in Electronic Arts’ stable of would-be CoD killers.

A 2010 reboot by developer Danger Close that moved the series into the modern theater was a solid effort, and certainly those that enjoyed it had reason to hope that Medal of Honor Warfighter would be another step on the series’ road back to prominence. Instead, it feels as though that road may be coming to an end.

When it comes to responsiveness and steadiness of aim, Warfighter does just fine. It’s when the game’s first-person cover system kicks in that it becomes clunky and annoying. In addition to aiming down the sight with the traditional left trigger, you can also accomplish this by holding down the left bumper; the difference is that the latter also keeps your character planted so any manipulation of the stick moves him in and out of cover. This results in a limited view (since you’re always zoomed in) and allows your enemies to pepper you with bullets.

There are a handful of vehicular sequences as well, which handle pretty well but also suffer from a limited viewable area since you drive cars from the first-person perspective. It’s a decent setup that takes its lumps in those moments when the game veers away from traditional FPS fare.

Visually, Warfighter is starkly divided between some fantastic looking cut scenes and truly uninspired, glitch-ridden environments that see enemies appear and disappear right in front of your eyes. The technical issues don’t stop there, either, as the frame rate nosedives when things get too intense and textures are slow to load even when installed to the hard drive. Another issue is that levels are simply too dark, which becomes especially problematic since night vision is a scripted event rather than an available piece of tech.

Competent voice acting saddled with cliché dialogue covers the story portion, while inconsistently mixed audio throughout the action sections makes the game feel rushed (and this is after applying the 2 GB update). An eminently forgettable soundtrack rounds out a disappointing showing, and frankly, there’s simply no way a big budget game from a publisher like Electronic Arts should have these issues.

Terrorists want to blow stuff up, you want to stop them. That’s the broad strokes of Medal of Honor Warfighter’s campaign mode, which awkwardly (and unsuccessfully) tries to inject a human element by giving the main character (Preacher) a wife and child — she doesn’t want him to be Tier 1 anymore, but it’s in his blood, damn it! A big part of the reason it doesn’t work is because there’s no reason to view him as anything but indestructible. One minute he’s worrying about the state of his relationship, and the next he’s eviscerating terrorists with a hatchet. That’s not how you build empathy.

Manufactured emotion aside, Warfighter is as “by the numbers” as a game can get. You move from one area infested with enemies to another with the occasional vehicular or on-rails segment slotted in to break up the monotony. It’s not as though the best shooters aren’t littered with action, but they manage to vary the pacing so that it isn’t a glorified shooting gallery. When Medal of Honor tries it comes off as simultaneously derivative and uninteresting, low-lighted by a section where you drive a speed boat in the least exciting getaway sequence I can remember.

And then there’s the breaching. The slow-motion sweep and clear was a cool concept that continues to find its way into seemingly every FPS these days — even 007 Legends had a couple — but believe me when I tell you that you’ve never seen anything like this. Breaching is a major gameplay mechanic — so much so that successfully tallying head shots during these sequences will unlock different breaching animations to use the next time you break down a door (and believe me, there will be a next time). It’s overkill to the umpteenth degree.

All told the campaign stretches over 13 missions, though three of them are incredibly short, including one level that consists of waiting to take a single shot. Seeing it through to the end should take 4-to-5 hours, but it’s one of those games where you’ll forget nearly all of it within a couple days since the entire thing has an overriding “been there, done that” feel.

That vibe carries over 100 per cent intact to the game’s multiplayer. Warfighter features five modes, only one of which (Combat Mission) feels remotely different, and even that simply tasks you with attacking or defending three points with the attacking team having a finite number of respawns to draw from. The map design is serviceable at best, and there’s far too much spawn camping going on.

Perhaps the bigger issue, however, is the disconnect between the game’s stated authenticity and the Halo-esque amount of damage soldiers can sustain. Opposing players become nearly superhuman bullet sponges online, forcing you to linger too long on a surprised opponent and allowing their nearby teammate to take you down. Online multiplayer isn’t terrible, but with juggernauts Halo 4 and Black Ops 2 on deck it’s hard to imagine Warfighter having much longevity.

As someone who largely enjoyed 2010’s Medal of Honor reboot, I can only classify Warfighter as a major disappointment. It brings nothing new to the table and contains far too many glitches even after a massive Day One patch. Only the truly dedicated need do more than rent.

By Herija Green
This entry was posted on Tuesday, November 6th, 2012 at 12:17 pm and is filed under Herija Green, Video Game Reviews. You can follow any responses to this entry through the RSS 2.0 feed. Responses are currently closed, but you can trackback from your own site.