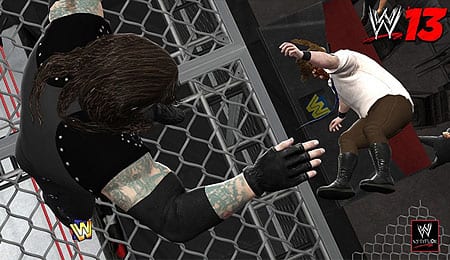 With God as my witness, he is broken in half!

By any quantifiable measure, World Wrestling Entertainment is struggling. Its flagship show, Monday Night Raw, which once routinely drew ratings in the 5s and 6s, has flat-lined ever since the move to a three-hour format — it has been below 2.9 for eight consecutive weeks, and the Oct. 22 episode drew the program’s lowest, non-holiday number in over 15 years (2.48). Into that climate comes THQ’s annual wrestling release, WWE ’13, which has one distinct advantage over the live product — it can draw on the company’s celebrated past to generate interest.

Little has changed following last year’s overhaul with the same striking, grappling and countering system in place. A series of location-specific “OMG” moments are new, as is the ability to catch opponents with certain finishers. I’d like to see THQ move away from the button mashing submission escapes, but other than that the setup allows you to choreograph the action nicely.

Visually, WWE ’13 looks nearly identical to its predecessor with the same strengths and weaknesses (long hair still looks bad). Most of the historical wrestlers are well rendered, and no matter how many times I see it I still enjoy the way blood ends up splattering. There did seem to be more problems than ever with the camera, however, as the frequent changing of angles can be disorienting and even cause you to fail time-sensitive objectives. Moments when your vision becomes obscured by a sign or some other object are infrequent, but they’re still annoying.

Speaking of annoying, the audio is once again decidedly uneven. Throughout the Attitude Era mode there are segments in which the original commentary has been added to great effect. It’s really cool to hear Jim Ross call a match before he lost his fastball, and guest appearances from the likes of The Rock and “Stone Cold” Steve Austin provide some insight into why those guys became stars. Unfortunately, those tracks are limited in scope, and switching back to the Ross/Jerry Lawler in-game commentary serves to really underscore how stiff and robotic their call of the action is.

As with last year, there are also issues with the audio mixing. Sometimes the combination of the crowd and in-ring promos makes for a clear, broadcast feel. At others, the dialogue is either way too loud or completely drowned out. Crowd reactions can make or break a match, and coming up short in that department once again hurts the overall presentation.

By far the biggest difference between WWE ’13 and past offerings is the inclusion of Attitude Era in lieu of the Road to WrestleMania, which featured storylines written specifically for the mode. Split into six chapters, the Attitude Era serves as a look back to the promotion’s hottest period when a star-studded roster turned the wrestling world on its ear with original angles, high-intensity matches and a healthy dose of sex and violence.

For fans like me, who were basically introduced to wrestling during that timeframe, it’s like a nostalgic walk down memory lane. You’ll see the changing of the WWE culture through the eyes of several of the most important superstars, including Austin, The Rock, Shawn Michaels, Triple H, Mick Foley, The Undertaker and, of course, Vince McMahon. Matches are placed into context through a series of slickly produced videos as well as text, laying out how things were set up and why the wrestlers are squaring off against one another.

Each bout possesses a primary goal (almost always to simply win the match) along with a number of historical objectives. For example, the infamous Rock-Foley “I Quit” match tasks you with striking Foley 13 times with a chair before triggering the match-ending cinematic. Some cryptically refer to passing a WWE moment, but it’s simply a quick-time event that almost always leads to a ref bump. The reward for passing these secondary objectives is unlocking bonus content, including more than a dozen additional Attitude Era bouts that generally feature secondary players like Ken Shamrock and X-Pac.

It provides a more enjoyable experience than recent Road to WrestleMania offerings, but it’s sure to contain some hand-wringing, controller-hurling moments for those looking to complete all those bonus objectives. Some of the more maddening ones include pinning an opponent with 10 seconds of hitting your finisher and escaping the cage without using a finisher. Both may sound innocuous, but when your opponent’s manager hops up on the ring apron for the eighth time to distract the ref and prevent a fall see if you can hold the four-letter words back.

WWE ’13 generally provides some engaging in-ring action, though once again bouts on higher difficulty settings can devolve into frustrating counter fests. There are also some wonky moments to be found when venturing into the gimmick matches where objects don’t react as they should. Still, the pacing of matches seems improved, even from last year.

Naturally, THQ’s impressive suite of customizable content makes a triumphant return, which when combined with the open-ended, GM-focused Universe mode provides the game with the potential for a perpetual flow of user-created content. Given the large number of available wrestlers at your disposal, the booking alternatives are really impressive this year, and any would-be booker should enjoy the additional storyline options. Content can be uploaded and rated by the WWE community, and this year created wrestlers can be taken online.

In the marketing phase of WWE ’13, THQ touted the game as a revolution (hence the presence of CM Punk on the cover). It isn’t. The core mechanics are nearly identical to last year and audio problems persist. That being said, the Attitude Era is the best single-player component the series has featured in years; it’ll be especially appreciated by long-time fans. Ultimately, WWE ’13 is a very good game, albeit one that’s more evolution than revolution.

By RotoRob
This entry was posted on Wednesday, October 31st, 2012 at 11:19 am and is filed under Herija Green, Video Game Reviews, Wrestling. You can follow any responses to this entry through the RSS 2.0 feed. Responses are currently closed, but you can trackback from your own site.