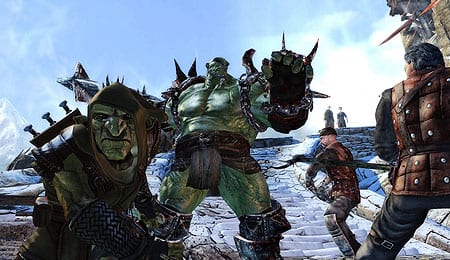 Stop looking at my effing junk, you effing a-hole!

Let’s face it, folks. No one really likes orcs and goblins. It’s true. When’s the last time you watched any of the Lord of the Rings flicks and said, “You know, I feel really sorry for those orcs getting stepped on by those trees,” or “Aw, man, those goblins didn’t need to die.” But maybe, just maybe, we really should look at it from their perspective. After all, they were just chilling in those dwarf mines, probably eating breakfast and minding their own business — until some “fellowship” came wandering into their established home. They were just defending their turf and all of the sudden, they’re the bad guys who deserve to get arrows shot in their face?

The folks at Cyanide Studios demand orc and goblin justice. They say, “Eff those hobbits, humans, elves and dwarves! Those greenskins were here first!” The message is loud and clear in their new fantasy role-playing game, Of Orcs and Men, where the shoe is now on the other foot; albeit a big, green, hairy disgusting orc foot that probably smells like swamp ass and liquid horse dump. I’m not sure that’s how the idiom works, but let’s roll with it, shall we?

Of Orcs and Men places the fates of an unlikely duo into your hands; Arkail, a fierce and beastly orc, and Styx, a wiry and sneaky goblin. By issuing strategic commands during combat, the gruesome twosome pair muscle and trickery to deal massive pain to those who cross their path. When engaging in combat, three wheels of commands representing battle stances appear, slowing down the on-screen action. After selecting four options from either offensive, defensive or special attacks, your beastly anti-heroes carry out their dirty work in that order. You can also hot key your favourite commands to the face buttons to streamline the fighting.

The key to successful battling is constantly shuffling your characters’ position on the battlefield, making balanced decisions and keeping a tight eye on how your actions play out. Gamers who are well versed in the Dragon Age titles will pick it up in a jiffy while those who crave die-hard Skyrim-style action might not buy into this right away. Raging your way through by simply clicking the basic attacks is not an option. This game is brutally unforgiving from the start, forcing you to explore all options and develop the correct tactics. There is no instant gratification here, but when you finally get the hang of cycling between both guys and learn the layout of the command wheels it’s very satisfying.

As you’re breaking backs and showering daggers into your foes, you’ll be escorting your heroes from locale to locale, occasionally stumbling across a treasure and taking control of whichever character suits the situation. For example, small and tight areas may require Styx’s size and stealth for infiltration. However, the game never truly opens up, which makes it always feels like you’re traversing through corridors, making exploration overly dull and linear for an RPG.

Arkail’s and Styx’s models are fantastic, as are the environments that fill the world of Orcs. Jungles, woods, ruins and slums are presented with meticulous detail and lighting. Sadly, the catch is that the game doesn’t move as good as it looks, plagued by inconstant frame rates and unimpressive animation. During cinematics, facial expressions and lip synching prove to be stiff while gameplay movement lacks life and personality. The voice acting is fair, but the editing of conversation is painfully stilted, which prevents the story from achieving an organic flow.

Plus, the over-indulgent use of the f-bomb and foul language takes away any mature edge that may have been intended. It’s hard to get sucked into a fantasy world when the dialogue sounds like a bunch of wise guys taking a piss at a ballgame with this “effing” guy over here and that “effing” wall over there. Did these greenskins just effing learn how to effing cuss? You bet your effing ass they did, muh effer.

It’s a shame because the premise for Of Orcs and Men certainly has promise. We’ve seen many battles in books, movies and games where men stand their ground against hordes of slimy goblins and giant berserker orcs. But it’s uncommon to see the fight from the opposite perspective. Here, goblins are on the verge of extermination and the once-mighty race of orcs has been driven into submission. In a desperate, last ditch effort, a group of orc warriors known as the Bloodjaws send their most fierce warrior, Arkail, on a bold mission: assassinate the Emperor of the human kingdom. Creating an unlikely bond with his crafty guide, the smack talking and money-hungry Styx, the two set off to change fate for both of their thinning lineage.

This adventure has some real meaty potential, however Orcs isn’t something that you can dive into easily. For newcomers to a more strategic RPG, this is pretty much sink or swim. The first few battles thinly teach the basics but then quickly toss you into situations where boat loads of soldiers overwhelm your duo and dish out a serious ass whipping. Seeing as you start off underequipped and under-experienced, it’s a potentially frustrating hill to climb very early on in the quest. Those who don’t give up and walk away cussing like the game’s characters will eventually learn how to soften their foes up with Styx’s speed and distance while Arkail defends, before unleashing the beast when the time is right.

For established fans of tactical RPGs, the combat might be right up their alley, but unfortunately, the rest of the experience lacks equal depth such as equipment and leveling up. Weapons and armour may add visual flair to your pair, but essentially each piece you find is stronger than the other — simply equip and move on. There isn’t much play into their stats or attributes other than the plus sign being larger than the previous version. Leveling up offers little more as you distribute attribute points as you see fit and open up new attacks for your stances offering optional perks. But here’s the bottom line: there isn’t much freedom in molding your warriors. Regardless of how you choose to build your stats, you’ll always have one big strong guy who’s slower than your quick, weak little guy.

Of Orcs and Men has a rather linear nature in terms of story and experience progression, yet it’s fueled by a complex system of menu-driven combat. The story marches along from plot point to plot point without a sense of open-world exploration — a seemingly fit setting for a hack ‘n’ slash title with light RPG elements sprinkled in. But that’s not what this is, either, which ultimately leaves a sense of disappointment regardless of what you’re looking for. It’s too shallow for a prolonged quest and too convoluted for thrill seekers.

I know some will find bloody satisfaction in Of Orcs and Men, a foul-mouthed graphic fantasy with some good merits all around. However, I think it’s safe to say it won’t win over action fans into the RPG genre while experienced quest seekers will find the lack of options uninteresting.

By Jess Castro
This entry was posted on Thursday, November 1st, 2012 at 12:10 pm and is filed under Jess Castro, Video Game Reviews. You can follow any responses to this entry through the RSS 2.0 feed. Both comments and pings are currently closed.