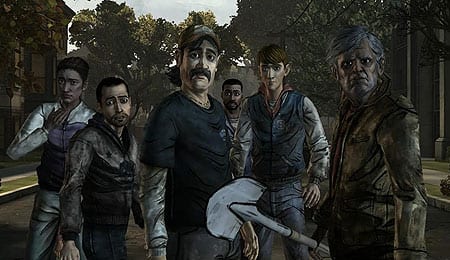 By the end of Episode 4, you’ll pick who to take on The Walking Dead’s final journey.

Note: The Walking Dead series looks, sounds, and plays the same from episode to episode. For an examination of those series characteristics, please see our Episode 1: A New Day review. This review will only provide an overall score for Episode 4: Around Every Corner.

Telltale’s The Walking Dead series is told in five episodes, and the structure has worked out as follows so far:

That brings us up to Episode 4: Around Every Corner, which could also be called The Calm Before The Storm. Oh, there’s plenty of shocking, horrible moments, and the plot moves forward swiftly. However, it doesn’t quite carry the weight of Episode 3’s crucial moments, at least not until the final section of the episode. Because of that, Episode 4 feels like a bit of a standalone segment — related to the overall plot, but veering off on some tangents to give you a breather before the final act.

There’s exploration, puzzle solving, new characters, and very clumsy gunplay (Telltale should never, ever make a first-person shooter without refining its interface skills). The series’ technical limitations still show up, and it actually gets in the way quite a bit in one cumbersome sequence where Lee is fighting off zombies while stuck in wood. It’s par for the course, though one positive turn from Episode 3 is that the extended adventure-game puzzle segments have been truncated.

While the grim tone remains throughout, Episode 4 allows for some exploration, both physically and emotionally. The resulting journey provides layers and layers peeled back regarding how humanity reacts in the face of such a no-win situation.

Similarly, the critical choices here feel like they stem from the other characters exploring their own boundaries rather than Lee making all the tough calls. Instead, his choices enhance other characters’ opinions — both of themselves and each other.

Then there’s his relationship with Clementine. I’ve played adventure games since the days of King’s Quest, and I don’t think I’ve ever seen such a well-built parent/child relationship as Lee and Clementine. When I make Clementine upset, it really hurts and I try to think of how I can get Lee to win back her favour. And when the episode concludes with a double-whammy of a cliffhanger, it’s as emotionally spent as I’ve ever been playing a game. To top that off, Telltale has added some of the series most stunning moments — after you play it, you’ll know exactly what I mean when I say “zombie in the attic.” Take that, Heavy Rain.

The Walking Dead’s slow pace and focus on narrative hasn’t changed at all. But with a thrilling (and probably heartwrenching) conclusion just weeks out, I wouldn’t have it any other way.

By Mike Chen
This entry was posted on Monday, October 22nd, 2012 at 10:33 am and is filed under Mike Chen, Video Game Reviews. You can follow any responses to this entry through the RSS 2.0 feed. Both comments and pings are currently closed.