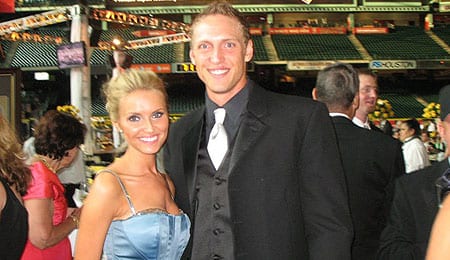 Hunter Pence has had a crappy NLCS and no, we don’t feel sorry for him either.

Four times this postseason the San Francisco Giants have been on the chopping block and four times they have survived to fight another day.

Can they do it again in Game Six Sunday evening back at home against the St. Louis Cardinals, who remain a win away from heading back to World Series?

Friday night it was Barry Zito of all people who pulled a rabbit from his hat, keeping the Giants alive for another day.

After getting tagged by the Reds in his NLDS start, Zito only got another chance because of the scuffles of Madison Bumgarner. Well, with 7 2/3 shutout frames, he sure as hell made the most of it, and if San Francisco can somehow come back and win this series, this performance will have definitely marked a turning point.

The Giants could probably use a little something something from Hunter Pence Sunday. He’s just 2-for-19 in the series with a run in the Game One loss and a meaningless solo homer in another loss in Game Four. Pence’s only contribution to a winning effort came Friday when he grounded into a fielder’s choice and wound up scoring as part as the Giants’ four-run fourth.

It’s Ryan Vogelsong vs. Chris Carpenter in Game Six – a good matchup for the Giants considering how things turned out Monday (7-1 San Francisco). Still, Carpenter is a major X-factor for the Cards and you can’t ignore his franchise record 10 postseason wins. The dude knows how to take home big games. He closed out two series last year en route to bringing another World Series title to St. Louis.

Meanwhile, the Tigers are sitting back and hoping these teams need to go seven and have to throw everything they have at each other to emerge victorious.

By RotoRob
This entry was posted on Sunday, October 21st, 2012 at 9:56 am and is filed under BASEBALL, Game Preview, RotoRob. You can follow any responses to this entry through the RSS 2.0 feed. Both comments and pings are currently closed.