John Farrell Returns to the BoSox 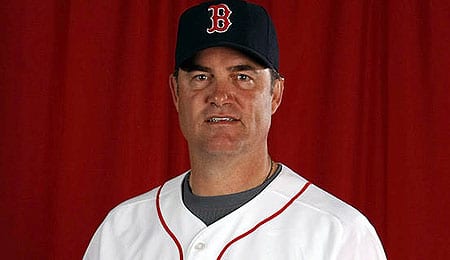 Can John Farrell fix the shit show in Beantown?

Back in the day, teams tended to wait until after the World Series to start shaping their plans for the following season. Someone should have mentioned this to the Red Sox, Jays, Marlins, Athletics, and Diamondbacks — all of whom who had very busy weekends.

Boston’s search for a successor to the failed Bobby Valentine experience came to a rapid conclusion (after weeks of speculation), as Toronto manager John Farrell returns to the BoSox. The Jays also sent David Carpenter to Beantown while Toronto acquires Mike Aviles. Farrell will have his hands full in Boston but it’s not like he doesn’t know what’s ahead. The former BoSox pitching coach will be at the very least a relief after the disaster that was Bobby V. in 2012.

Aviles can play both middle-infield spots and he could be a potential replacement for Kelly Johnson who is heading into free agency this offseason. It could also mean the end of the road for Yunel Escobar in Toronto, and after his antics towards the end of the 2012 campaign, we’re betting that he will need to find a new home to ply his trade in 2013.

The Diamondbacks were active this weekend — making a pair of deals. In the first trade they shipped Chris Young to Oakland for Cliff Pennington and Yordy Cabrera and then flipped Cabrera to Miami for Heath Bell. Before we run rampant about the genius that is Billy Beane, the D-Backs actually didn’t fair all that badly. Pennington is coming off a down year in Oakland that saw his BA drop to a career low of .215, but he has a solid glove and fills a gaping hole in the desert at shortstop. Jacob Elmoreand John MacDonald obviously weren’t the answer.

This also puts Adam Eaton, who enjoyed a breakout campaign at Triple-A and a solid September audition, in the driver’s seat to own not only the centre field gig but also fill a big hole in a leadoff role for ‘Zona.

The acquisition of Young by the A’s makes a crowded outfield even more muddled. With Yoenis Cespedes, Josh Reddick, Coco Crisp, Seth Smith and now Young, you would have to believe that there are more moves forthcoming in Oakland. There is no doubting the power-speed potential that Young possesses but he’s also been a terribly inconsistent performer with poor strike zone skills. The upside potential is there but will it ever be displayed on a consistent basis?

The Diamondbacks are still obviously believers in Bell and think he can provide insurance in a setup role for J.J. Putz and additional depth to an already strong bullpen. From the Marlins’ perspective this was all about moving salary as they are only on the hook for $8 million of the remaining $21 million on the three-year deal they inked Bell to last offseason. Steve Cishek, who took over for Bell when he struggled this year, has to be the favourite to run with the closer gig in Miami heading into 2013. He’s everything that owner Jeffrey Loria could want in a closer in that he’s under control for the long haul at or near league minimum from a salary perspective.

In a rather surprising move on the other side of the Pacific, 18-year-old high school hurler Shohei Otani has declared his intentions to head to the major leagues. Otani was considered to be a first rounder — possibly the No. 1 overall pick — in the upcoming NPB amateur draft and this will be the first time a high school player of this stature has headed our way. The 6’ 4”, 190-pounder has three solid pitches in his repetoire, including a fastball that can touch triple digits, so he will be a highly sought after free agent this winter.

Not surprisingly, the Dodgers, Red Sox and Rangers are considered to be the front-runners to ink the young phenom.

By Tim McLeod
This entry was posted on Monday, October 22nd, 2012 at 4:38 pm and is filed under BASEBALL, Tim McLeod, Transactional analysis. You can follow any responses to this entry through the RSS 2.0 feed. Both comments and pings are currently closed.