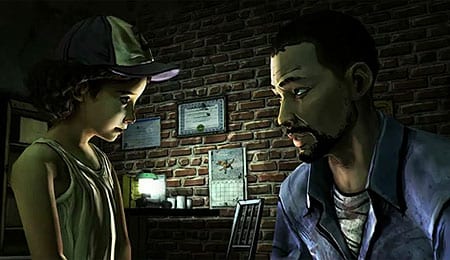 Like the TV show, The Walking Dead emphasizes relationships over gore.

Telltale Games has carried the flag for adventure gamers, particularly on consoles. And while the company has bounced between beloved properties (Monkey Island, the upcoming King’s Quest continuation), some people were concerned with Telltale’s acquisition of popular properties. Back To The Future was received well, though Jurassic Park was problematic on many levels — so much so that many gamers were left wary of Telltale’s upcoming game based on The Walking Dead.

Fortunately, any anxieties go away as soon as you load up The Walking Dead’s first episode. It’s an emotionally gripping and smartly executed introduction into the world. Fans of both the comics and the TV show won’t be disappointed. The tale of Lee Everett works both as a prequel to the franchise (including encounters with some familiar faces) and a standalone story within the universe created by Robert Kirkman.

Telltale control schemes have gone through various iterations over recent years. For a while, games such as Sam & Max had character movement and proximity be the driver for interaction. Jurassic Park turned things into an almost completely quicktime affair. The Walking Dead brings both of these together, then tosses in an old-school point-and-click cursor for a surprisingly effective hybrid scheme. Basic movement is handled by the left analog while a semi-transparent cursor is controlled by the right analog. The cursor has top/bottom/left/right icon slots, each corresponding to a face button. When an action is available, an icon pops up in the appropriate slot.

Inventory management has disappeared, which will disappoint old school adventure gamers hoping to combing this with that in order to solve a puzzle. Instead, inventory items are contextually sensitive, appearing as a cursor icon when appropriate. This does create some simpler solutions to puzzles, but much like Heavy Rain, the game’s experience is more about how you influence the story rather than figuring out how to make your phlegm thicker for a spitting contest (blatant Monkey Island 2 reference).

Heavy Rain-esque quicktime events haven’t disappeared, though they’re used much more effectively in The Walking Dead. In some cases, the right-analog cursor becomes involved with the action, as you have to place it over the appropriate item before you hit the right button. Many of these hybrid quicktime events come with a time limit because of outside influences (like that zombie trying to eat your guts). It’s a simple control scheme, but this extra bit of movement winds up creating more tension in a stressful situation.

The Walking Dead’s art style is based on the comic series, so you won’t be seeing life-like characters looking like they stepped out of the AMC show. Cel-shaded models and environments keep the look and feel consistent, so much so that it’s sometimes hard to tell when cut scenes end and gameplay begins. The game’s voice actors are effective, with the leads shining brightly while some supporting characters sound like they stepped out of the local community theater.

As this isn’t an official license of the AMC TV show, you won’t hear the familiar theme song, though its rippling violin line was obviously the inspiration for the game’s theme tune. Like the show, the use of silence and low atmospheric music is done to create mood without ever being too invasive. As for the zombies, well, they sound like zombies. I’m sure there’s a stock library for all entertainment media to use for zombie sound effects at this point.

Telltale said it wasn’t heavily influenced by Heavy Rain when it made Jurassic Park, but it forgot one of Heavy Rain’s most important elements — choice and consequence. Not so with The Walking Dead. From dialog to quicktime events, your choices affect the way characters treat you (and based on previews from upcoming episodes, who will help you and who will die). Because of this, the game unfolds more like a high-production zombie Choose Your Own Adventure tale rather than a game in the truest sense. This may put off some gamers, but the story itself is engrossing. Combined with strong pacing, a fascinating world, and well-written characters, The Walking Dead can easily suck in any non-gaming friend or spouse into watching and “playing” (that is, yelling choices at the screen). There is the occasional puzzle, but most of those tend to focus on the logistics of realistically moving the story along as opposed to a puzzle for the sake of gameplay. One of these exists in the middle of the game, and it will probably live in adventure game infamy similar to the Gabriel Knight cat hair puzzle in terms of character stupidity.

Most of your choices come out during dialog with other characters, and many of these come with a timer beneath the dialog options. Whether you support someone, insult them, or act indifferent, a note will flash on the screen telling you how the specific character reacted. While these don’t provide many life-altering consequences — it mostly changes the tone on how people talk to you — the seeds are planted for future ripple effects. There is, however, one significant choice at the end of Episode One, and based on the weight of this choice, it seems fair that Telltale feels no one is safe in this world.

I haven’t said too much about the story, and that’s mostly because story comprises most of the game’s experience. It’s best to walk into it as cold as possible so you’re not swayed in one direction or the other. However, because of your choice’s ripple effects, there is a good level of replayability. This will probably become even more evident when future episodes roll out and you think, “Oh crap, I should have saved the other person” but as we learned with Heavy Rain, interactive fiction is all about the journey, not the result.

From a technical perspective, each element of The Walking Dead falls under Very Good, not Great territory. When tied together with fascinating characters and a immersive world, it becomes something special. Anyone looking for a zombie action game a la Dead Rising or Left 4 Dead will be disappointed. However, if you’re a fan of the franchise (in either form), like adventure games, or enjoyed Heavy Rain, The Walking Dead is a grand experience and one of the best things Telltale has ever done.

By Mike Chen
This entry was posted on Wednesday, May 2nd, 2012 at 9:17 am and is filed under Mike Chen, Video Game Reviews. You can follow any responses to this entry through the RSS 2.0 feed. Responses are currently closed, but you can trackback from your own site.