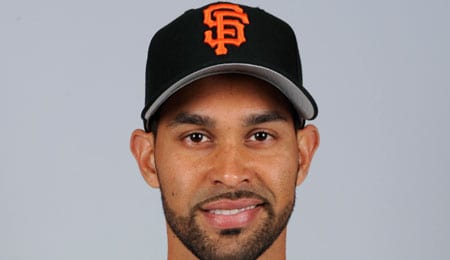 Despite Angel Pagan’s glovework, the Giants are on the brink in the NLCS.

Another Thursday evening has come and gone and with it, another episode of RotoRob’s Fantasy Baseball Weekly Podcast, heard at 9 p.m. EST each week on Blogtalkradio.

This week — even with a truncated show given the lack of things to talk about at the moment — was not without its technical snafus as RotoRob got summarily dumped from the Podcast briefly. But all in all, things went smoothly as the panel discussed such issues as:

Listen to the Podcast in its entirety by clicking the play button below. Do it. Do it now.

By RotoRob
This entry was posted on Friday, October 19th, 2012 at 12:47 pm and is filed under BASEBALL, Buck Davidson, Podcast, RotoRob, RotoRob's Fantasy Baseball Weekly, Tim McLeod. You can follow any responses to this entry through the RSS 2.0 feed. Both comments and pings are currently closed.