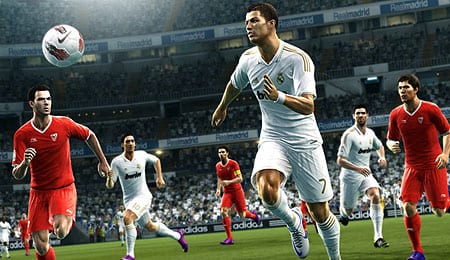 PES 2013’s crazy control scheme is deeper than just about any sports game out there.

Pro Evolution Soccer has been around a while in different forms, and there was certainly a time when it sold on the strength of its name rather than being a true competitor to the world-dominating FIFA series (see the FIFA Soccer 2013 review here). But last year’s version was certainly a step forward, and this year’s PES 2013 is notable for being the anti-FIFA — and for many people, that’s a good thing.

PES 2013 doesn’t look quite as good as FIFA Soccer 2013, nor does it have as many real-life stadiums or club/player licenses. What it does have, though, is a ridiculously detailed control scheme that’s nearly as in-depth as a fighter like Tekken Tag Tournament 2.

This is a good news/bad news scenario, and it all really depends on what you’re going for. It’s totally possible to play PES 2013 with fairly basic controls, plus a few series staples like the off-ball technique. If you played the game at this level, you’d certainly see some differences compared to FIFA Soccer 2013 but it won’t be a marked difference. However, invest in a few hours of practicing advanced controls and you’ll soon find that PES 2013 isn’t just another footy game.

Those few hours will be a breaking point for some people, so if you’re not willing to commit, it’s really kind of a moot point. But if you are, here’s an overview of what you can master (Note: The button/stick combinations can get a bit complicated when you write them out, so just take my word for it — they exist and they take some time to learn):

Nutmegs and other tricks are possible too, and much of this involves timed usage of R2 while you have the ball. Off the ball, defense is based on containment-style approach — holding “X” down locks you to an opponent while the left analog finesses your distance until you want to pressure, tackle, or hold up.

If that sounds like a lot take in, it is. The in-game tutorials tend to be fairly limited in feedback and demonstration — hence, the requisite few hours you’ll need to simply get the hang of it. Mastering the controls will take hours of in-game play (and you’ll probably want to get pretty darn good at it before you take on the online competition), and that’s why PES 2013 controls are a very refined and acquired taste.

As sports games go, there’s certainly nothing wrong with PES 2013’s presentation, visually or audibly. Stadiums look nice (though I did notice the occasional weird texture break during panning), and the animation capture is fluid and varied. However, player models look lifeless close up, and the lighting sometimes comes off as harsh at times. And because PES 2013 has a limited amount of licensed teams and players, commentary is nearly non-existent. Longtime series fans are probably used to this, but for those new to the series, it can be a bit of a surprise.

It’s hard to talk about gameplay without referring back to the control scheme. As you master the controls, you’ll note that individual players will play to their strengths. In many sports games, in-game ratings are essentially just traits, but with the finesse of PES 2013’s controls, it feels more like controlling the virtual player’s limbs like a football-mad puppeteer as opposed to simply pointing them in a direction.

Learning to execute and maximize the skills of the best players is definitely the true highlight of PES 2013, and the game’s slower pace is fine-tuned for this purpose. It helps that the AI and ball physics have improved from last year’s version, and the combination of individual virtuoso and a real sense of team system on defense make PES 2013 a truly tactical experience.

For as much depth as PES 2013 brings to the in-game action, there’s nothing terribly special about its gameplay modes. If you’ve just blown off the excess of modes provided by this generation’s EA Sports titles, then you’ll probably appreciate the more streamlined approach in PES 2013. Master League returns, including a streamlined management mode complete with questionable decision making and strange occurrences (your players sure do get moody over the season). Be A Legend is particularly enticing with PES 2013’s deep controls, as you can truly fine-tune your experience and your playing style to a specific position. Online modes contain the usual variety of friendlies and ranked matches, though there’s a good bet that the longer the game is out, the more you’ll see dedicated PES players maximizing their finessed controls — newbies be warned.

PES 2013 is certainly a unique beast, and if you dare to get sucked into it, you’ll find yourself handsomely rewarded — though it does get docked a tad for its steep learning curve. Robust and somewhat insane amount of controls offer a revolutionary new approach to sports games. By focusing on the subtlety of advanced controls, PES 2013 has laid the foundation for any sports game developer that wants to stand up to the EA Sports juggernaut. It’s not for everyone, but if you’re willing and dedicated, you’ll find an in-game experience that is more intricate than ever seen in a sports game before — and yes, that includes FIFA Soccer 2013.

By Mike Chen
This entry was posted on Friday, October 5th, 2012 at 9:57 pm and is filed under Mike Chen, Video Game Reviews. You can follow any responses to this entry through the RSS 2.0 feed. Both comments and pings are currently closed.