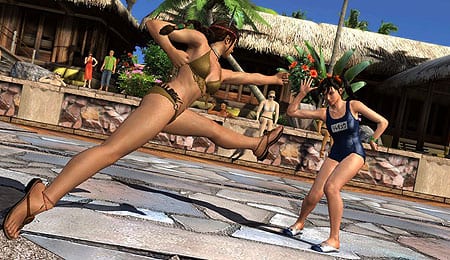 Customize your Tekken experience with unlockable bikinis. For the men too.

The original Tekken Tag Tournament came as a stop-gap between Tekken 3 (Playstation) and Tekken 4 (Playstation 2). Now that 2009’s Tekken 6 has had some time to sink into the gaming archive, Namco has taken the Tag formula and applied it to the advances made in Tekken 5 and Tekken 6. Is Tekken Tag Tournament 2 worth your time and money? As fighting games go, there aren’t too many that can stuff as many options into a single package.

The Tekken series has been known for its fluid fighting animation, and there’s no drop when it comes to that standard. Fighters move like they’re in an ultra-violent dance (and slo-mo replays accentuate this fact), all over a huge range of colourful backgrounds. The fighters themselves still remain detailed, though they have a plastic-doll quality about them, especially when they talk. Fighters come with different outfits, some unlockable and some that will undoubtedly be purchasable DLC. Since the game itself has a tongue-in-cheek quality, a lot of these outfits do too (add butterfly wings to the roid-raging Paul Phoenix!). It’s not that important in terms of gameplay, but the high level of customization does add a bit of variety to the game.

Tekken music has always been raging techno and/or J-pop, and you’re not getting anything different here. However, one of the coolest additions is Tekken Tunes, which lets you play whatever music you want from your console’s local library (it won’t work with media server files, though). For me, it brought flashbacks of my high school days when I’d put on a CD, mute the TV, then play Street Fighter 2 on Sega Genesis for hours on end. It’s such a simple thing but I got a huge kick out of it – there’s nothing quite like having an epic fight in some forbidden lava temple set to David Bowie’s “Space Oddity.”

Controls are probably the most important part of a fighting game, and Tekken Tag Tournament 2 takes the “if it ain’t broke” mentality. The traditional scheme of each face button corresponding to a limb is still intact, and there’s no change in responsiveness or the fluid nature of Tekken. Each fighting game has its own feel, and while some people feel that you can win at Tekken simply by button-mashing – which isn’t quite as easy to pull off in, say, Street Fighter or Virtua Fighter – Tekken has enormous depth that requires time to be properly explored. Different strokes for different folks, and for better or worse, not much has changed with this iteration’s timing or feel.

The only real addition compared to Tekken 6 is the ability to tag in and out. This is mapped by default to a trigger button as well as the right analog, though you can customize it all you want. My only complaint comes with the button customization, as button-assigned side-stepping still hasn’t returned. That’s just a minor quirk preference, but I’m not sure why Namco took it out several generations ago and never brought it back as an option when custom-mapping the buttons.

If you’re a Tekken veteran but have never played its lone Tag iteration, here’s how it goes – you control a two-person team that allows you to tag in and out. While your character is tagged out, he/she can regain a limited amount of health (as signified in the health meter). A round is lost when the tagged-in person is knocked out, regardless if the other character has health. Tagging in/out can only take place after your character is on the ground, so there’s no way to tag out of a mid-air juggle. This makes for perilous moments when your character is nearly out of health.

While it may sound like only a marginal expansion, the tag mechanic actually adds quite a bit of new strategy, particularly because you can do tag combos based on timing. The regenerating health also leads to new ways of approaching when you want to use certain characters; in addition, your attack strategy has to change on the fly based on who your opponents are. When you combine both of those new factors, it’s possible to turn a near-death match on its head with a simple well-timed tag.

Who’s involved from the Tekken universe? Pretty much everyone – 59 playable characters, to be exact. While some characters are merely re-skins of others, and some are simple variants of fighting styles, it’s still something that offers a ton of replayability. That’s pretty necessary, considering the fact that the single-player options are essentially training grounds for multi-player. Single-player game modes are standard fare: arcade mode, survival mode, time attack, and practice. In addition, traditional one-on-one fights can be played. If you’re looking for the traditional Tekken Force side-scroller, it’s one of the few things that didn’t make it into the package.

The heart of Tekken Tag Tournament 2 really comes in multiplayer – and with both local and online options available, there are plenty of ways to fight. During the search for online opponents, players are loaded into a training room – this is a significant improvement from Tekken 6’s generic “Searching” screen and a welcome addition to pass the time.

Online mode offers ranked matches and general match-ups, though rankings are a bit deceiving since they’re based on character usage rather than overall record. That means that even though you can set a ranking range for your opponent search, it’s wildly inconsistent. On a scale from 1 to 10, I’d consider myself a 6 when it comes to Tekken. I’ve played it since Tekken 3 on the original Playstation, and I have my favourite characters which I can handily beat CPU opponents with. In the online realm, though, I seem to be a bit of an anomaly — I’ll either get thrashed to bits or I’ll win fairly easy.

That probably has more to say about the community than the actual game, but it can be frustrating, especially since I’m used to pretty even local match-ups with a friend. Hopefully, the further we get from release, the more balanced the community will be. And the good news is that new-to-Tekken gamers have more than enough offline options to really get a feel for the franchise’s unique fighting style before they venture into the online arena.

It’s important to note that I personally experienced a bit of lag with almost all of my online matches – not enough to really affect them, but still more than I’d like to see and much more than I’d encountered playing other games like Mass Effect 3 online. However, a quick Google search shows that I’m in the minority.

If you like Tekken, you’ll love this game. If you’re interested in Tekken, this is the version to pick up due to its overwhelming number of options. Tekken Tag Tournament 2 is Tekken, warts and all. The difference is that it’s the kitchen-sink version with a bazillion different ways to play and just about as many characters to pick from. Fighting games don’t get much more complete – as long as you enjoy its distinctive brand of virtual (not Virtua) martial arts.

By Mike Chen
This entry was posted on Monday, September 24th, 2012 at 7:38 pm and is filed under Mike Chen, Video Game Reviews. You can follow any responses to this entry through the RSS 2.0 feed. Responses are currently closed, but you can trackback from your own site.