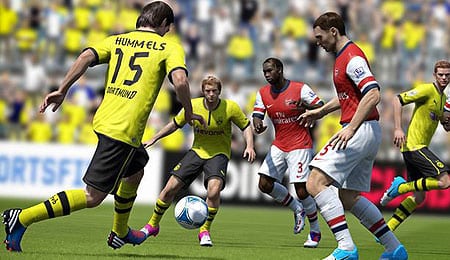 EA Sports’ biggest game is back with more gameplay choices than ever before.

Madden may be a near-holiday for many in the United States, but FIFA is EA’s fastest-selling and most profitable game. The award-winning EA Canada team is back at it with FIFA Soccer 13 (or FIFA 13, as it’s known to everywhere outside of North America), and much like its excellent NHL 13, there are subtle but effective gameplay differences tacked on to expanded game modes, all creating a fantastic experience that’s not a giant leap forward.

To put it bluntly, there isn’t a noticeable leap in basic controls with FIFA Soccer 13. That’s not necessarily a bad thing, though — if it ain’t broke and all that, right?

However, EA Sports has implemented a few new features that tie directly into how you play the game. In many sports games, there’s a general lack of unpredictability when it comes to handling the ball/puck/whatever. That makes it easy to catch something in full flight; FIFA Soccer 13 has addressed this by adding unpredictability when making the first touch on the ball. How and if you catch it depends on a combination of player ratings and your input — if you slow down a tad, that will minimize the chances of fumbling the ball. Similarly, if you use the right analog to tap it forward, it’s easier to catch up to it.

I can’t tell if it’s real-time physics (spin, speed, bounce, etc.) or if it’s algorithm-based, but it’s implemented well enough to be present without overwhelming. As a casual footy fan but an avid sports gamer, it’s little touches like this that impress me.

The other area of improvement is the analog-based dribbling. EA Sports touts it as “true 360-degree mobility,” but it’s really just a refined version of FIFA Street’s dribbling capabilities. It’s a natural and intuitive way to control the ball while pulling off some sweet fakes. More importantly, ball control is now the equivalent of a twin-stick shooter, allowing you to dribble the ball while facing a different direction.

FIFA Soccer 13 has an advantage over its EA Sports brethren as the view of the pitch tends to be much wider than, say, a hockey rink or a pitcher/batter staredown. Because of that, player details tend to be far more forgiving and the graphical detail is based more on lighting and stadium design.

When you watch replays, though, you’ll get a better look at player models. They’re pretty standard as this generation’s sports games go — you’ll recognize your favourite players but they’ll definitely have that plastic doll look to them. As for the stadiums themselves, they’re wonderfully detailed and it does seem like there’s just a little more oomph to them compared to last year. It’s not a make-or-break thing, but they’re nice touches, and the great lighting effects make them look even more realistic. Note that if you’re a Major League Soccer fan, your team’s stadium still isn’t available (or “in the game,” as EA Sports would say) except for the Vancouver Whitecaps — that’s probably because the game was developed by EA Canada.

Annual sports game updates rarely do much to change the audio side of things, and FIFA Soccer 13 is no exception. The broadcast team of Martin Tyler and Alan Smith are back, and the game’s soundtrack features a big roster of modern rock and indie artists: Bloc Party, Metric, Passion Pit, Kasabian, etc. Stadium cheers and chants offer some atmosphere but there’s likely little chance you’d notice an audible difference between FIFA Soccer 13 and its previous iterations– or the PS3/Xbox 360 versions compared to the Wii/PS3 versions.

On the pitch, two adjustments improve the experience from FIFA Soccer 12. First, the in-game player physics (Player Impact Engine) have been improved, so now collisions won’t seem like an EPL player running over a schoolyard boy or two guys duct-taped together. (Obligatory hockey comparison from a former NHL writer — it’s more similar to the in-the-slot jostling that EA Sports introduced in NHL 12.)

Second, the overall AI has improved on offense and defense. Sports franchises claim this every year, but this year’s results seem to add up to that. It’s not just getting open for passes or defensive positioning, though; the AI seems to have combined with the improved player physics and first-touch reactions so that moves and jostles are a little more organic.

While those two elements are improvements, they’re still fairly incremental. The bulk of FIFA Soccer 13’s changes come in the form of game modes — that is, so many game modes that it feels like the only thing missing is playing as Keira Knightley in Bend It Like Beckham. Let’s run through the list, shall we?

Single position or entire club, manager or player, online or offline, party mini-game or full match — FIFA Soccer 13’s game modes pretty much have it all covered. It’s everything a footy fan could want out of their virtual experience, and that’s its biggest strength: once you get burned out on one mode, you’ll easily find another way to enjoy the core experience.

It seems like EA Sports’ M.O. these days is to provide incremental gameplay tweaks while giving a buffet of gameplay options. FIFA Soccer 13 is no different; taken on its own, it is pretty much the most comprehensive virtual footy game you can have. You can’t really argue with that.

While Mike was putting the console version of FIFA ’13 through its paces, I was spending some time on the portable pitch with the Vita edition. First off, to be clear, this is not a true port of FIFA ’13 but instead more of an update of FIFA Football — a distinction that has rankled some gamers. As such, many of the new features found on the Xbox 360 and PS3 are absent here.

Available modes include Virtual Pro, where you create your own player from scratch, and Career, which allows you to guide said player (or an existing one) through up to 15 seasons. There’s also a franchise-type Manager mode where you direct a club, setting lineups, handling contracts and transfers, and monitoring the team’s budget. There is no Ultimate Team mode, however, and the online suite lacks the EA Sports Football Club as well — a pair of disappointing omissions.

In terms of Vita-specific controls, FIFA ’13 comes up wanting. Touch screen passing works OK as long as you’re moving left to right on the Vita, but when attacking right to left it ends up feeling really awkward — not to mention that your hand obscures the screen. Using the rear touchpad to shoot really doesn’t work at all unless you’re doing a penalty kick. On the standard side view it’s imprecise and way too finicky in terms of power (the meter fills based on how long you keep your finger pressed down).

FIFA ’13 looks pretty good in motion. Even with so many tiny players on the screen it’s nearly impossible to lose track of the action. The ball does still tend to stay attached to your feet, though, which is a phenomenon that has been improved upon on the console. Goal celebrations are also pretty absurd, and they feature wonky moments like guys impaling themselves on poles or getting stuck endlessly inside the goalie’s net. Commentary is lively. The buzz of the crowd is a little much.

If you already own FIFA Football there doesn’t appear to be a compelling reason to add FIFA ’13 to your collection. If you’re in the market for some portable soccer and haven’t picked one up, however, the best experience on the Vita is FIFA ’13.

By Mike Chen
This entry was posted on Thursday, October 4th, 2012 at 11:24 am and is filed under Herija Green, Mike Chen, Video Game Reviews. You can follow any responses to this entry through the RSS 2.0 feed. Both comments and pings are currently closed.