MLB Notes: Will Texas Open a Spot for Jurickson Profar? 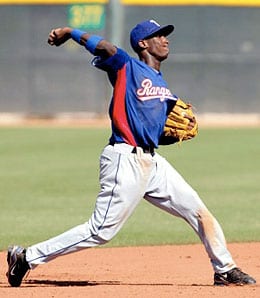 What will the Rangers do with Jurickson Profar next year?

Andy Pettitte looked great Monday, helping the Yanks stretch their lead to 1.5 games, while apparently Josh Hamilton must add caffeine-based drinks to the list of beverages he cannot handle. Heath Bell, meanwhile, did not mince words about his crazy-ass manager, Ozzie Guillen. Yup, it was another fun-filled day in the majors.

Today, we’re going to toss a few quick-hit Fantasy tidbits at you.

By RotoRob
This entry was posted on Tuesday, September 25th, 2012 at 1:07 pm and is filed under BASEBALL, Fantasy Notes, RotoRob. You can follow any responses to this entry through the RSS 2.0 feed. Both comments and pings are currently closed.