Is Mike Aviles Done in Boston? 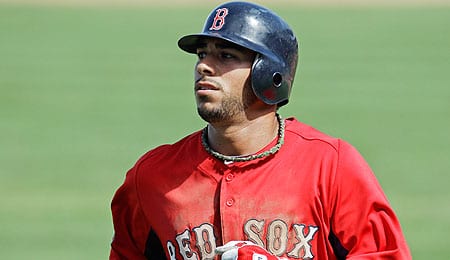 Mike Aviles could be looking for work this winter.

Heading into the season, we ranked Mike Aviles 51st among third basemen and 31st among second basemen. In fairness, he’s performed far better than that, ranking as a top 25 player at the hot corner and top 20 at second base.

However, in 2013 Aviles will only qualify at shortstop – a position he hasn’t reached the magical 20-game mark at since 2009.

Now the question is whether the arbitration eligible player will be back in Beantown next season.

There’s certainly some reasons to consider his season a success. He was far better than most expected he’d be a shortstop for one. Secondly, he did set a new career high in homers (albeit, in a career high number of games).

It was certainly a productive season for Aviles, but his .283 OBP sticks out as butt ugly — especially for a dude that hit leadoff more than anyone else. Yuck. And people wonder what happened to Boston this year. Uh… ya.

Over the last couple of weeks, Aviles has spent a lot of time on the pine for the going-nowhere BoSox, who wanted to take another look at Jose Iglesias.

Our guess is that Aviles is a non-tender candidate, especially since he’ll likely be pushed into a utility role, and the Sox will have cheaper, younger and faster options to do that job.

Aviles proved durable this season, and that was a bonus, but his overall numbers relative to PT weren’t good. His batting eye — which has never really hinted at being good — has gone south since he donned crimson hose.

Aviles got off to a fantastic start before the wheels fell off. He then scuffled for three straight months before enjoying a nice August. September, however, has been his worst month yet.

Boston is probably desperately hoping that Iglesias answers the call offensively, but that hasn’t happened so far, meaning that next year Aviles could again see much more action than expected (unless the Sox find a replacement).

He’s been a must-own AL asset and low-end mixed league option this season, but can be safely cut in the final week as he’s barely seeing any action.

By RotoRob
This entry was posted on Thursday, September 27th, 2012 at 11:13 am and is filed under BASEBALL, Player profile, RotoRob. You can follow any responses to this entry through the RSS 2.0 feed. Both comments and pings are currently closed.