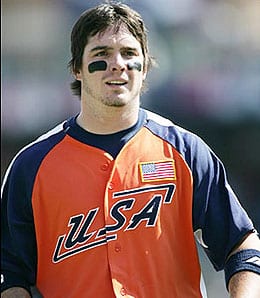 Andy LaRoche hit better in Pawtucket, but was shut out of the bigs this year.

Sometimes, we are just so freaking bang on it scares us.

Take our preseason prognostications for Billy Butler, for example.

When we ranked him as the top DH to own in Fantasy baseball, we said that if the power surge continues, we could be looking at a .310-25-100 man. Well, here we are with a couple of weeks left in the season, and Butler is batting exactly .310, has set a new career high with 27 homers and has matched his career best with 95 RBI, with plenty of time to reach the century mark.

Can you say breakout, baby?

Butler is finishing with a flourish, hitting safely in eight straight games and homering in each of the last two to get within striking distance of that long-awaited first 30-dinger campaign. His two-run jack with one out in the ninth inning Saturday tied the game for the Royals, 2-2, against the Angels. Salvador Perez went yard immediately afterwards to allow KC to walk off with the W.

Other than a middling May (in which he still hit a season-best six homers with 19 RBI), Butler has been money all year long. His lowest OPS by month was that May at 818. That’s not too shabby!

And while those homers in the past two games are his first long balls of September, Butler is still batting a season-best .339 this month to jack his BA up to where it is now.

Okay, more runs would nice (and perhaps the declining walk rate is a factor here), but we love the fact that as he nears his power prime, those doubles are turning into home runs right on cue thanks to a massive surge in his FB/HR rate. Certainly there are questions of whether such a high rate (21.1 per cent compared to previous career high of 11.9 per cent) is sustainable, but for now, Butler’s owners are enjoying the ride.

He’s obviously going to set in a new high water mark in RBI, has already done so in homers and has an outside chance to reach his best BA ever as well. Freaking impressive shit!

Kudos to Butler for his career year.

By RotoRob
This entry was posted on Sunday, September 16th, 2012 at 2:17 pm and is filed under BASEBALL, Fantasy Notes, RotoRob. You can follow any responses to this entry through the RSS 2.0 feed. Both comments and pings are currently closed.