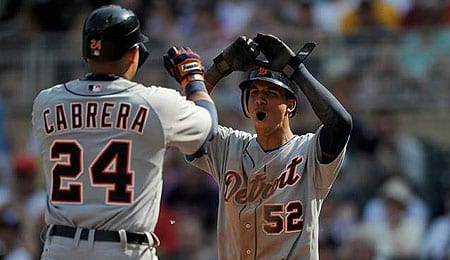 Heading into the 2012 season, we didn’t have major expectations for Philadelphia Phillies’ third baseman Placido Polanco, ranking him 30th among Fantasy players at the hot corner.

The way things have gone this season, the veteran would love to be performing as we as we projected as he currently ranks around 50th among third baseman. In other words, Polanco’s value has been limited to deep NL-only leagues at best.

Polanco took another 0-for-3 Monday, running his hitless streak to three straight games. Since his last multi-hit effort on June 29, he’s just 3-for-31, losing almost 20 points in his average in the process.

While he showed some life in May and especially June, the other two months — April and July — have been downright ugly.

Overall, Polanco’s walk rate has dropped significantly this season and his current BA is his lowest mark since he was a rookie with the Cardinals way back in 1998.

From a Fantasy perspective, our recommendation is to dump Polanco, unless you are in a very deep NL-only league, in which case, plop him on your bench until he starts to hit again.

At the age of 36, it’s reasonable to wonder how much Polanco has left in the tank. For some reason, the Orioles are interested, but the Phils are holding out for one or two top prospects, which seems foolish. A bottle of ketchup would be a great return right now. If it’s jalapeno ketchup, we’d make that deal in a heartbeat.

The Phils are definitely considering going into seller mode, and if they can find a sucker willing to take on Polanco, they have to jump at the chance.

Of course, Polanco isn’t the only veteran that may be on the block in Philadelphia. Others that could be moved include Shane Victorino, Joe Blanton and Cole Hamels. Even Jimmy Rollins is now being bandied about as a possible trade chip.

By RotoRob
This entry was posted on Tuesday, July 17th, 2012 at 1:25 pm and is filed under BASEBALL, MLB Today, RotoRob. You can follow any responses to this entry through the RSS 2.0 feed. Responses are currently closed, but you can trackback from your own site.