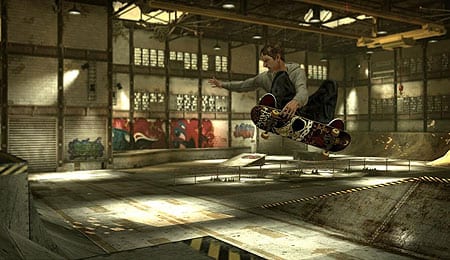 After a long hiatus, the Birdman is back.

For years, Tony Hawk games used to be a regular occurrence, something you’d expect right around the corner. Then, all of a sudden, they stopped. Some just forgot about them; others relied on past titles to get their fix. However, the series is finally back in a sleek, high-definition package. Dubbed Tony Hawk’s Pro Skater HD, Activision’s latest release also marks the beginning of Microsoft’s Summer of Arcade. And after spending some quality time with Tony Hawk, let me be the first to say that it has been too long, my old friend.

Tony Hawk games have always been about intense arcade action at their core, and the controls reflect that. Face buttons control all your tricks, from flip tricks to grinding and grabs. Every direction executes a different trick, double tap and you have even more at your disposal. Combo linking workhorses like manuals and reverts also find a happy home here, though you won’t get much use out of the latter.

It’s a setup that’s extremely simple and easy to understand, enforcing the pickup-and-play approach that became a staple for the series, allowing new players to get down the controls easily and letting old pros rack up combos without frustration. Unlike the original, however, this has a balance bar for grinding and manuals, an inclusion that’s greatly appreciated. For series vets it should only take a few runs to shake off the dust… after that it’s like you never stopped playing.

The levels in Tony Hawk have been prettied up before, handed out in new titles to fan’s delight. This time around, however, it’s a whole new experience. Loading up Warehouse and dropping in for my first run was like reliving every high-score run I had attempted on the original, bolstered to new heights with a fresh coat of paint. Other returning THPS1 favourites such as Downhill Jam and The Mall round out the first game’s offerings, while Marseille, School 2, The Hanger, and Venice Beach bolster the roster of levels with some real star power from THPS2.

Each level looks amazing, with meticulous detail on every object near and far. The characters themselves match the quality that the environments put forth while still pulling off the cartoonish quality that the series is known for. This is the definitive version of these levels to date, and newcomers have the treat of experiencing them at the top of their game from the get go.

If there’s anything as iconic as Tony Hawk’s gameplay, it’s the soundtrack. The series has offered up some of the greatest hits of the time, striking a perfect balance between the genres offered. From ska to gangster rap, everything was given a chance to shine and, despite some licensing issues, Tony Hawk HD snagged a couple classic tracks to make the experience all the more authentic. Songs such as “Superman” by Goldfinger and “Bring the Noise” by Anthrax are sure to bring back memories for returning fans. New players get to experience the old school and the new, with a few current-generation songs appearing as well to round out the stable of offerings.

Even with all the good the game puts forth, though, there might inevitably be some bad. As a fan of the originals, some of the new tracks didn’t sit well. This wouldn’t be a problem if you had control over the soundtrack, but sadly this service is denied. Not a huge problem, but seeing as this is a HD remake (most likely to be bought by series veterans) it would’ve been nice to have.

It has been a while since a Tony Hawk game has been released, and this entry seeks to return to its roots. This is classic Tony Hawk gameplay with straight arcade action at its finest, where games are decided by combos and last-second 100,000-point scores. It’s as back to basics as you can get for a Tony Hawk game, a move that the series needed and is well appreciated.

The original’s career mode makes its return with all the challenges on each of the seven re-mastered maps, along with a couple of new ones on the THPS1 maps, which makes playing through this HD remake feel like experiencing it for the first time all over again. Each level has 10 challenges for you to conquer, with collectable hunting, trick challenges and high-score runs to satiate your skating appetite.

As a sign of the changing times, collectables get the HD upgrade as well, with cash pickups being changed out with credit cards and secret tapes being swapped for DVDs. Collected money from pickups and challenges can then be used to upgrade your character’s stats, and buy boards and special tricks, making those high-score runs all the more impressive with your progression.

Conquered Career mode and still pining for more? Take on PROjectives mode, which offers five higher difficulty challenges on every level for skilled players to tackle with objectives like the infamous C-O-M-B-O line and “Boneless the Magic Bum.” Not enough? How about Hawkman mode, which tasks players with collecting pellets on combo lines while also requiring specific trick types to pick up certain colours. Think of it like C-O-M-B-O got its own dedicated play mode.

What, still crave more? Hop on Big Head Survival, which sets you off on a level with a perpetually inflating head, requiring you to constantly land tricks and combos to let off some air and keep going as long as possible before it explodes. The new game modes are tons of fun and still pull off the tongue-in-cheek humour the series is known for.

As if that weren’t enough, there’s also a multiplayer mode where you can take your skills online and battle it out with three other players in either Free Skate, Trick Attack, Big Head Survival or Graffiti Mode — a mad land grab where you tag objects to your ownership by scoring the highest point total on that object.

Now, Tony Hawk HD is a great game, but it’s far from perfect. You’re given a nice collection of skaters to choose from, and even your Xbox Avatar is available for skating fun, but several Tony Hawk regulars don’t appear in this title. A cast of younger skaters steps in to fill the ranks, but returning fans will no doubt feel the sting of missing their favourite skaters (Chad Muska, anyone?).

Another feature mysteriously absent is local multiplayer. Although skating online is fun, a game series that was built solely on couch multiplayer just doesn’t seem right when you take it away, especially when you’re releasing an HD remake of said title.

However, those issues pale in comparison to the game’s biggest frustration. Remember big drops from THPS2? Remember how they completely destroyed combos for you by forcing a bail on drops over a certain height that, due to the arcadey nature of the game, occurred quite often? Well, they’re back and just as terrible. It’s mindboggling for such a realistic game mechanic to be implemented with no other purpose than to be detrimental to the overall gameplay, especially considering how hated it was the first time around.

The exclusion of certain things, and inclusion of others, might be frustrating, but you need to look past these issues. Tony Hawk’s Pro Skater HD is still a great title that’s sure to give fans of the series and newcomers alike plenty of play time.

By Justin Redmon
This entry was posted on Wednesday, July 18th, 2012 at 12:01 pm and is filed under Justin Redmon, Video Game Reviews. You can follow any responses to this entry through the RSS 2.0 feed. Responses are currently closed, but you can trackback from your own site.