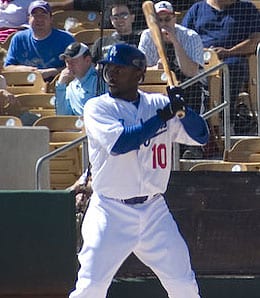 Tony Gwynn, Jr. is getting plenty of action with Matt Kemp sidelined.

We’ve got to give some props to Tony Gwynn, Jr., who is significantly outperforming our expectations to the point where he’s a solid pickup in deep NL-only leagues.

Heading into the season, we ranked Gywnn at a top 130 outfielder, hardly a high enough slot to garner much attention.

However, Gwynn is performing at a top 75 level, and he played an integral role in the Dodgers’ 6-5 win over Philly Wednesday, tripling in the tying run and then scoring the go-ahead run, one of two runs he scored in the game.

Matt Kemp’s injury has helped clear PT for Gwynn and he took advantage in May, hitting .291 with 11 runs and four steals. He had been slumping in June, but has hit safely in both games he’s played against Philly and deserves a look in NL-only leagues as long as Kemp is out.

Overall, Gwynn’s extra-base power has declined this season, which isn’t surprising because, age-wise, he’s on the downward trajectory in that department. He’s made up for that by hitting for as high a BA as he ever has and doing a slightly better job of getting on base, although he’s never going to be confused with his Hall of Famer dad from that perspective.

Gwynn, Jr. did draw a walk Wednesday, but don’t get all hot and bothered – it was an intentional free pass.

Gwynn will continue to see nearly daily PT for the next few weeks as Kemp heals from his latest hammy setback. If you need some swipes and a decent BA for your squad, take advantage of Gwynn’s extra at-bats while you can.

By RotoRob
This entry was posted on Thursday, June 7th, 2012 at 1:26 pm and is filed under BASEBALL, MLB Today, RotoRob. You can follow any responses to this entry through the RSS 2.0 feed. Both comments and pings are currently closed.