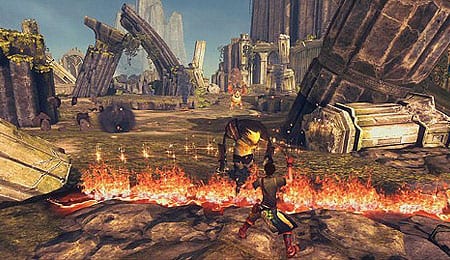 It’s fun using a magic wand to fight monsters — just not wave upon wave of them.

First shown at E3 2010, Sorcery gradually became known as the Playstation Move’s great hope for a killer app. It’s finally landed, and while it definitely delivers what it promised — more importantly, it works accurately most of the time — Sorcery ultimately leaves a taste of what might have been.

Sorcery tells the tale of a young brash apprentice named Finn, a talking cat named Erline, and their mentor Dash. Oh, and there’s a fairy realm and evil queen, along with orcs and the undead. It starts out innocently enough, as Finn and Erline embark on a little bit of an exploration while moving rocks and turning sheep into pigs and rats (the tutorial section). Then all hell breaks loose and you’re in for an engaging fantasy tale… if you can just get past all of the damn enemies.

Sorcery’s big hook is its Playstation Move integration. It seems pretty logical, as the Move is essentially a wand, so using it as a magic wand makes sense. A waggle motion fires bolts out of your wand, and the Move’s sensors are reasonably accurate enough to get the general aim direction. It helps that your bolts lock on, so you don’t have to be too precise. Bolts can be fired straight, higher, lower, and curved to either side. In fact, after a little bit of time, I was able to angle around boulders and trees to protect myself from enemies while firing curved bolts to attack them. It’s very cool, and only takes a little bit of time to get used to.

Sorcery gives you the ability to use different spells. Switching them involves pressing the Move button, then doing a particular gesture for each spell. Similarly, contextual wand movements are available and noted with an icon on the screen. Need to fix a collapsed bridge? Get close to it and move your wand like a gear in motion. Giant boulder in the way? No problem — just flick your wand up and the boulder flies out of the way. It’s simple but very effective way to make you feel immersed in your world.

Spell options are created through the alchemy screen, which also involves Move use. When you combine three ingredients together, the Move is involved: shake out sprinkles of one ingredient, then pour another into the cauldron, and give the whole thing a good stir. I never found this to be tiresome and, in fact, it was a quirky way to feel like you’re there.

There are some traditional controls involved, as the “X” button somersaults you across the screen and the L2 button creates a magic shield. But the only traditional control that bogs the game down is the one that doesn’t exist — camera control. Sorcery uses a free-floating camera, which would be fine if you could control the camera angle. But since you can’t, you’ll wind up getting literally stuck between a rock and a hard place, with both environment pieces flashing on your screen. Pressing L1 centres the camera but it doesn’t always help. In a case like this, the best thing to do is to either use a fixed camera a la God Of War or find some smart way (given the Move’s limitations) to manually rotate the camera.

While Sorcery’s graphics won’t win any awards, they’re more than fitting for the game. With slightly cartoonish characterizations and lush environments, Sorcery quickly builds a credible fantasy world. Finn looks like a stock naive hero character, but that’s not necessarily a bad thing — it works given that he’s not, you know, a Jedi Knight or steampunk pirate or something visually striking. There’s some nice attention to detail with Erline’s tail’s expressive animation (if you have a cat, you know what I mean). As for their enemies, each area comes with its own set, though there’s not much variety in how they appear outside of bosses and mini-bosses. The grunts running at you are all basically skins of the same enemy programming with several variants in terms of weapons. As our heroes take out wave upon wave of these enemies, you’ll see a variety of different places as you play through the game’s relatively short campaign, ranging from a threatening underworld to a seemingly peaceful forest.

Voice acting is one of Sorcery’s strong suits, with both Finn and Erline bantering back and forth in a tone that’s appropriately playful. It’s hard not to like either of them, and that’s a credit to the actors behind the voices. In between areas, cut scenes move the story along. Rather than traditional CG animation, Sorcery takes its cue from motion comics — except in this case, it’s against the backdrop of a fairy tale storybook. I’m guessing part of the reason for this was budget, as Sony had to realize that it had a limited audience given the Move requirement. Still, it works, and it brings you into the situation at hand.

Once you master the controls — which really just comes down to getting a good judgment of aiming in the different directions with your wand — Sorcery’s gameplay begins to feel second nature. Opening chests, firing curving bolts, or shaking a potion before drinking it all become instinctual, and as the game’s well-written story draws you in, there are moments when Sorcery is great fun. With detailed environments, strong voice acting and likable characters, the foundation is there for a grand adventure that just happens to use the Move as an intuitive interface.

Unfortunately, there’s a major design issue despite this solid foundation. Once you get into Sorcery’s second act, the shortcomings can be summed up in one word: repetition. Fighting off a horde of enemies with your various magic powers is fun… until the next wave appears. And then the next, then the next, then the next — this time from your left instead of your right. Boss battles face a similar issue. While each boss battle comes with its own quirks, too much of it feels repetitive. And when some of the bosses summon lesser characters in wave upon wave of combat… well, you get the picture.

Granted, not all enemy encounters are like this, but there are enough to make combat become tedious waggling instead of fun creativity which is what happens with a reasonable amount of enemies and a bunch of different spells at your disposal. The more spells you get through the game’s alchemy system, the more you get to experiment with spell combinations. For example, an ice spell can freeze opponents, letting you quickly switch back to your normal lightning bolts to finish them off. After a few hours with Sorcery, I was mixing and matching spells while firing off bolts at angles and around curves. This is the peak of what Sorcery has to offer, and when it works with the proper balance of creative attacks and volume of enemies, it’s great fun. Balance, however, is really where the design team went wrong. There’s some element of exploration and currency, as you need to gather items to (optionally) create potions, or at least to sell so you can buy potion ingredients. This provides some level of depth, but it really only adds to your attack options, not the overall game.

The problem with Sorcery is that it begs to be more. The story and characters create a vivid world, and even the environments offer the ability for gameplay to offer more than just wave after wave of enemies. Why use your spells just for attacks? With an open world of exploration, the different spells and wand gestures could easily open up new environments, change environments, and fulfill sidequests. At the same time I played through Sorcery, I downloaded the HD release of Beyond Good And Evil and I couldn’t help but think about how Sorcery’s characters, controls, and action could have easily been cut-and-pasted into Beyond Good And Evil’s gameplay structure. Towns, non-player-characters, exploration, all of that would have created a much more fitting adventure rather than a quirky action game with motion controls and likable characters.

I wanted to really like Sorcery. I really did. The world, characters, and controls all seemed primed for a true breakthrough. But the decision to go with linear action sequences rather than Zelda-style exploration and discovery ultimately crippled the game. As a proof of concept, Sorcery works, and it’s fun for the majority of its relatively short campaign (8-to-10 hours) — but it could have been so much more; instead, the game collapses under the weight of its own design choices.

I don’t know if Sorcery will get a chance at a fully developed sequel. The technology is already in place, so it could happen. And in terms of size, the game clocks in at a PSN-friendly 600 MB, which means that if Sony really wanted to make this a living, breathing world, there’s plenty of Blu-Ray space to do it. If it does, I really hope the developers play through Beyond Good And Evil for inspiration first. I’d definitely buy that game.

By Mike Chen
This entry was posted on Wednesday, June 6th, 2012 at 11:54 am and is filed under Mike Chen, Video Game Reviews. You can follow any responses to this entry through the RSS 2.0 feed. Responses are currently closed, but you can trackback from your own site.