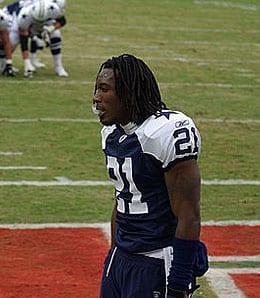 Dallas is getting lots of interest for cornerback Mike Jenkins.

We are currently trying to plan the 2012 RotoRob NFL Draft Kit, but in the interim we’ll check in with some news and notes from around the league.

Maybe Dallas is serious when it says that cornerback Mike Jenkins isn’t being shopped. Reports suggest that at least four teams – including the Colts and Lions – have been spurned in their efforts to land him. Jenkins reportedly isn’t pleased with this situation, so you have to wonder why Dallas doesn’t go ahead and get what it can for a player who’s attitude may be a roadblock during a season in which this team plans to go for all the marbles – especially with some thinking the Cowboys’ window is closing.

The San Francisco 49ers and Pro Bowl safety Dashon Goldson are reportedly only a $1 million apart in contract talks, but it doesn’t sound like the 49ers will want to go any higher than $7 million per season, and he wants a deal that will average $8 million per season. Meanwhile, with Goldson still trying to hammer out a long-term contract extension, rookie Trenton Robinson has been given a chance to work out with the team’s top defensive unit during OTAs. It’s unclear how long a contract Goldson is seeking (or what San Francisco is willing to offer). The 49ers have managed their salary cap issues very well, but obviously part of that process means choosing who to keep and who to let go. At any rate, the two sides have nearly six weeks more to hammer out a deal before Goldson is forced to sign the tender offer.

Terrell Suggs, a key component in what has been one of the NFL’s most dynamic defences for years, says he will be back from his partially torn Achilles’ tendon injury by late-November. But come on – let’s get real. He only suffered this injury in May, and it’s serious enough that he could miss the entire 2012 season. But Suggs says he’s already making great progress, is currently in a walking boot and working on flexibility with plans to start walking and working side to side next week. If he had fully torn his Achilles’, we’d be looking at a one-year recovery time; Suggs thinks he’ll be back in six months from a partial tear, which will allow him to play in the second half of the season for the Baltimore Ravens. Monitor his progress this summer and keep your ears open for more definitive timetables, ideally coming from team training personnel – not Suggs himself.

By RotoRob
This entry was posted on Tuesday, June 5th, 2012 at 1:20 pm and is filed under FOOTBALL, Pigskin Points, RotoRob. You can follow any responses to this entry through the RSS 2.0 feed. Responses are currently closed, but you can trackback from your own site.