The Wire Troll: The Return of Domonic Brown 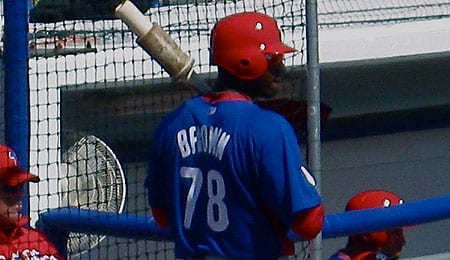 Domonic Brown has been recalled by the Phils. Is he worth the investment?

On Friday night alone, the Royals shut out the Cards, the first-place Indians won late, again, Erik Bedard tossed an eight inning gem for a win, and the Nationals (or was that the Redskins?) got a late field goal on their way to scoring 17 against the Orioles. Toss in the fact that two of the most anemic offenses in the majors — the Twins and the Diamondbacks — combined to score 15 runs and it does make you wonder if there was more to this end of the world talk than meets the eye. If you are reading this article, the pending “Rapture” has obviously been rained out, but a makeup day is sure to follow. Stay tuned for further information as it develops. Assuming we’re still here, let’s give this week’s potential waiver claims the proverbial once over.

Domonic Brown, OF, Philadelphia Phillies (CBS: 69 per cent owned; Yahoo!: 27 per cent): First, the good news: At two levels in the minors last year, Brown slugged 20 homers, drove in 68 runs, stole 17 bases and amassed a stellar .317 BA. Prior to his promotion to the Phillies last week, he had mashed two homers with 10 RBI and a .341 BA through 41 at-bats at Triple-A Lehigh Valley. Now the bad news: This spring, Brown went 1-for-16 and has yet to demonstrate his enormous potential at the big league level. It also looks — at least early on — that he’ll be riding the pine against southpaws. There is no doubt Brown has incredible potential; the question is when will we see it in the bigs? If you want this kid on your Fantasy squad you’re going to have to spend that FAAB and burn the draft priorities now and with the list of top prospects that will be venturing to the bigs over the next month or so, it’s a rather risky move if you’re playing in a redraft format.

Brett Lawrie, 3B, Toronto Blue Jays (CBS: 21 per cent owned; Yahoo!: 1 per cent): Lawrie is absolutely killing the ball at Triple-A Las Vegas and is getting closer to a callup every day. The likes of Edwin Encarnacion, Jayson Nix, and John McDonald just aren’t getting it done at the hot corner in Hogtown. Lawrie, 21, has mashed nine homers with 33 RBI, scored 39 runs, stolen nine bases, and has an outstanding .342 BA. The Jays are getting very close to promoting their next Canadian-bred prospect and now is the time to make a move if you want to acquire him at a reasonable price.

Ryan Ludwick, OF, San Diego Padres (CBS: 48 per cent owned; Yahoo!: 35 per cent): After an incredibly dismal start, Ludwick has turned it around rather nicely on the coast. Since the beginning of May he’s hit four big flies, driven in 17 runs, and is sporting a solid .303 BA in 66 at-bats. Ludwick is currently the only big stick in the Padre offense and he should be rostered in all formats to take advantage of him while he’s hot.

Rafael Furcal, SS, Los Angeles Dodgers (CBS: 59 per cent owned; Yahoo!: 46 per cent): The rumour mill suggests the Dodgers will activate Furcal Monday from the broken left thumb injury that’s sidelined him since mid-April. It’s worth taking a good look on your league waiver wire this weekend in the event that he’s slipped through the cracks and is available. Have I mentioned that shortstop is a rather bleak position this year?

Erik Bedard, SP, Seattle Mariners (CBS: 45 per cent owned; Yahoo!: 16 per cent): The oft-injured Bedard has put together a very nice little run over his past four starts, all quality in nature. During this stretch, he’s held opponents to only four earned runs and has back-to-back nine-strikeout efforts. If history has taught us anything it’s that healthy and Bedard in the same sentence is an oxymoron, so get him rostered and active in all formats and take advantage of his current stellar production until his next DL stint.

Danny Duffy, SP, Kansas City Royals (CBS: 27 per cent owned; Yahoo!: not available): The Vin Mazzaro beatdown prompted the Royals to make a move rather quickly and they turned to one of their many budding aces in the 22-year-old Duffy to shore up their rotation. Mike Montgomery has struggled with his command as of late and the other option at Triple-A is Jeff Suppan, so Duffy should have a rather long leash to show off his much vaunted skill set. The six free passes in his debut were very uncharacteristic so let’s chalk that one up to first game jitters and give him a mulligan. Duffy should be rostered in all AL-only and deeper mixed formats for now.

Jonathan Lucroy, C, Milwaukee Brewers (CBS: 37 per cent owned; Yahoo!: 16 per cent): Very quietly, Lucroy has moved from being an after-thought to a must start at the catcher position. In his last 10 games, he has amassed three homers, 11 RBI, and an outstanding .364 BA. The fractured pinkie that cost him the first couple weeks of April is obviously water under the bridge.

Mike MacDougal, RP, Los Angeles Dodgers (CBS: 1 per cent owned; Yahoo!: 1 per cent): The Dodger bullpen is an unequivocal mess. Matt Guerrier, Kenley Jansen, and now MacDougal are all in the mix in the closer-by-committee in Dodgertown. When Guerrier couldn’t get it done Friday, Big Mac picked up the save and he has the potential to garner more save opportunities moving forward.

Ryan Vogelsong, SP, San Francisco Giants (CBS: 28 per cent owned; Yahoo!: 24 per cent): For those that scoffed a bit earlier when I recommended giving Vogelsong a look, his last three starts would look very nice in your Fantasy team’s pitching categories. It will be very interesting to see what transpires when Barry Zito is ready to return from the DL.

Koji Uehara, RP, Baltimore Orioles (CBS: 19 per cent owned; Yahoo!: 21 per cent): Oriole closer Kevin Gregg has been struggling, allowing five earned runs in his past six outings. Uehara has been pitching well in a set-up role for the Orioles and could be on the verge of working his way into the mix for saves in Baltimore. If you’re looking to play the speculative closer game, Uehara should be near the top of your list.

Josh Collmenter, SP, Arizona Diamondbacks (CBS: 18 per cent owned; Yahoo!: 9 per cent): “Over the top” is a phrase that has to be used when describing Collmenter. Having had the opportunity to witness Collmenter at the 2010 AFL, I can attest it is something worth watching. Since being thrust into the D-Back rotation, he’s won both his starts, going six IP each time while allowing an identical two hits and no walks. Will batters figure out his unique delivery? When a pitcher’s current stats include an ERA and WHIP both under 1.00, you have to be willing to take the gamble that they won’t.

Doug Fister, SP, Seattle Mariners (CBS: 13 per cent owned; Yahoo!: 4 per cent): Yes, I am recommending Fister and, yes, I am struggling with the proposition. But he’s now put up quality starts in 7-of-9 outings this year and is currently sporting an ERA under 3.00. Don’t forget he led the AL in ERA for a couple of months last year before getting hurt. As RotoRob wrote in this year’s Fantasy Baseball Guide, “He deserves a shot on your team because you need to know whether or not his brilliant start last year was a fluke.”

Jason Bartlett, SS, San Diego Padres (CBS: 34 per cent owned; Yahoo!: 10 per cent): In 71 at-bats this month, Bartlett has 13 RBI, three stolen bases and a .296 BA while hitting in the two hole for the Padres. Ludwick has to have someone to drive in, doesn’t he?

Ryan Doumit, C, Pittsburgh Pirates (CBS: 21 per cent owned; Yahoo!: 15 per cent): The 30-year-old Doumit has been swinging a hot stick lately and is stealing playing time from Chris Snyder. Two homers, six RBI, and a .355 BA over the past two weeks explains why. Those are numbers that will get it done for both your Fantasy squad and the Pirates.

Justin Turner, 2B, New York Mets (CBS: 26 per cent owned; Yahoo!: 14 per cent): In 59 at-bats, Turner has one homer, 15 RBI, and an amazing .356 BA. It is going to get rather cluttered in New York when Ike Davis and David Wright return from the DL and Daniel Murphy heads back to the middle infield, but for now Turner is absolutely killing it, making a nice short-term option. Get him rostered now in all formats and let the chips fall where they may when the walking wounded start returning.

Vance Worley, SP, Philadelphia Phillies (CBS: 11 per cent owned; Yahoo!: 2 per cent): Joe Blanton is out indefinitely with elbow discomfort — his second stint on the DL with this issue in 2011 — and Worley, who looked absolutely brilliant with the Phillies when Blanton hit the DL the first time, has gotten the call. In two starts for the Phils, the 23-year-old Worley earned two wins, struck out a batter per inning and allowed only one earned run. As the fifth starter in the stacked Philly rotation, the righty is going to see some favourable matchups. Run support, however, may be wanting as the Phillies have scuffled horribly with the bats in May.

Jay Buente, SP, Florida Marlins (CBS: 1 per cent owned; Yahoo!: not available): In a rather surprising development (sort of), Marlin ace Josh Johnson has hit the DL with right shoulder inflammation. Buente has gotten the call and is getting the first shot at replacing Johnson. At Triple-A New Orleans, Buente was 3-0 with 44 strikeouts in 41 2/3 IP and is an intriguing option in both deeper and NL-only formats.

Jarrod Saltalamacchia, C, Boston Red Sox (CBS: 16 per cent owned; Yahoo!: 4 per cent): There has finally been a Salty sighting in Boston. He’s spanked two homers in his past four games while going 6-for-14, making him a roster-worthy catcher in two-catcher and AL-only leagues.

Tom Milone, SP, Washington Nationals (not listed at either CBS or Yahoo!): How many pitchers that are currently sporting an insane 44/3 K/BB ratio in 43 1/3 IP at Triple-A are not listed in the CBS, Yahoo! or ESPN player databases? One would be my guess and his name is Tom Milone. Give the southpaw some respect — he’s earned it.

By Tim McLeod
This entry was posted on Sunday, May 22nd, 2011 at 2:54 pm and is filed under BASEBALL, The Wire Troll, Tim McLeod. You can follow any responses to this entry through the RSS 2.0 feed. You can skip to the end and leave a response. Pinging is currently not allowed.